With holiday shopping season upon us, the Impressionist & Modern Online Sale offers a fantastic opportunity to acquire works by renowned artists at affordable price points. Sunny landscapes, inviting interiors and even a jubilant Christmas scene all feature in this sale, providing year-round imagery to decorate your walls. Here, we highlight a selection of lots and share why each carries particular appeal at this time of year. 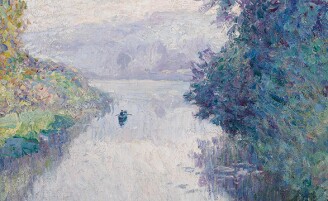