VIEW LOT
Dating from the pivotal year of 1913, Il Pomeriggio di Arianna (Ariadne's Afternoon) is one of only eight canvases that compose Giorgio de Chirico’s earliest painted series, as well as the genesis of his celebrated metaphysical style. Of these eight canvases, which date between 1912 and 1913, five reside in museum collections, such as The Metropolitan Museum of Art in New York and the Philadelphia Museum of Art, with only three, including the present work, remaining in private collections. Il Pomeriggio di Arianna (Ariadne's Afternoon) is distinguished from this limited group by its striking large-scale vertical format, and is the only example to depict the emblematic ship from the myth of Ariadne, Theseus, sailing away from the island of Naxos. Creating a world of enigma and uncertainty, verging between dreams and reality, de Chirico’s metaphysical works had a tremendous influence on the development of Surrealist theories and aesthetics.

VIEW LOT
Emerging from Man Ray’s incredibly rare, early body of paintings from the mid-1910s, Black Widow (Nativity) from 1915 was the largest and most groundbreaking work that the artist had ever painted. An iconic canvas within his oeuvre as well as a significant example of Abstraction, this dazzling work displays a crucial step in the artist’s development of his style of painting on a flat, planar surface, while also advancing the tradition of working on a monumental scale. Further underscoring its tremendous importance, Black Widow (Nativity) remained in Man Ray’s collection until 1953 and is undoubtedly the most important painting by the artist to appear on the market following the 1979 sale of Observatory Time: The Lovers from the collection of famed Surrealist patron and collector, Edward James. 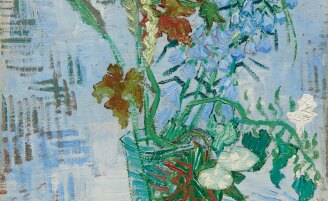 On offer from the same private collection, both works are poised to establish new auction records for their respective artists. The previous benchmark price for Giorgio de Chirico was established in 2009, when Il ritornante (dating from circa 1918) from the Yves Saint Laurent and Pierre Bergé Collection achieved $14.1 million. In November 2013, Sotheby’s set the auction record for any work by Man Ray when Promenade from 1916 sold for $5.9 million in our New York Evening Sale of Impressionist & Modern Art.