Every Supreme Skate Deck Ever Made Up for Auction

Online Only | Through 25 January

A rare opportunity to own every single Supreme skate deck ever manufactured is now open for bidding in the online-only sale 20 Years of Supreme. The unique single-lot auction is the product of Sotheby’s partnership with StockX and follows on the 2018 exhibition of the private skateboard collection at the Jason Vass Gallery in Los Angeles.

Established in 1994, Supreme began as a skateboarding and fashion shop in downtown New York City and quickly grew into a global brand with stores in Tokyo, London and Paris. Over the course of its history, Supreme has cultivated a niche audience of luxury streetwear consumers while working with some of the most groundbreaking designers, artists, photographers and musicians – all who have helped continue to define its unique identity and attitude and contributed to its reputation as the unicorn of cult streetwear. 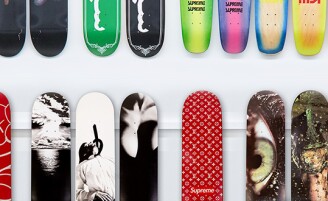 Supreme started producing their own skateboards in 1998 and have collaborated with many well-known brands over the last 20 years – most famously with Louis Vuitton. Supreme is also known for their artist collaborations, featuring the likes of George Condo, Jeff Koons, Damien Hirst, Richard Prince, KAWS, Marilyn Minter, Nate Lowman, and Takashi Murakami, among others.

The skate decks are on view at Sotheby’s New York galleries through the completion of the timed online auction which is open for bidding through 25 January at 12pm EST.

More on 20 Years of Supreme