Press Release. Andy Warhol: Heaven and Hell Are Just One Breath Away!

This February in London, Sotheby’s S|2 gallery presents Heaven and Hell Are Just One Breath Away!; an exhibition of works by an artist who needs no introduction, the King of Pop, Andy Warhol. Providing a window onto a lesser-known part of his oeuvre, the show charts his explorations into mortality and religion, executed in the latter years of Warhol’s pioneering career.

Born into a fervently Catholic family, Warhol was brought up in Ruska dolina, the Ruthenian borough of Pittsburgh. A devout Catholic himself, the artist attended weekly church services with his beloved mother, Julia Warhola. Though ever in his thoughts, it wasn’t until his final years that Warhol’s oeuvre became dominated by portentous and religious imagery, flirting with styles and symbolism from Eastern and Western Catholic art history, and carefully reframing them within the context of Pop.

“Besides celebrating Andy Warhol as the quintessential artist of his time and place – the artist who held the most revealing mirror up to his generation – I’d like to recall a side of his character that he hid from all but his closest friends: his spiritual side. Those of you who knew him in circumstances that were the antithesis of spiritual may be surprised that such a side existed. But exist it did, and it’s the key to artist’s psyche.”

John Richardson, Eulogy for Andy Warhol Given on the occasion of his memorial service at St. Patrick’s Cathedral in New York City (April 1, 1987)

Opening on the cusp of the artist’s major retrospective at Tate Modern, Heaven and Hell Are Just One Breath Away! feature quintessential works from Warhol’s Last Supper series – further examples of which star in the exhibition, Revelations, on view concurrently at The Andy Warhol Museum. A reimagining of Leonardo da Vinci’s Renaissance masterpiece, the fresco held enormous significance for Warhol; his mother kept an image of it in her bible, and a reproduction hung in their home in Pittsburgh. Yet, in true Warhol style, the artist’s version of the work also reflects his fascination with consumerism, taking his inspiration from the mass-produced copies of the piece as opposed to da Vinci’s original.

Hanging besides these visions of The Last Supper is the prophetic Heaven and Hell Are Just One Breath Away! from which this exhibition takes its title. Lifted from a church pamphlet, the slogan fuses commercial typography with religious ideologies. Together, these paintings incorporate universal subjects and provide a modern-day memento mori, using the inevitability of mortality as a lens through which to celebrate life.

Warhol’s works are also joined at S|2 by a seventeenth century Italian school Vanitas painting titled Still Life of Skulls. Haunting in subject yet beautifully executed, the canvas similarly alludes to the passing of time, reminding the viewer of the transitory and fragile nature of life, as well as the vanity of earthly possessions. Resurrecting the skull image, Warhol reinterpreted the classical vanitas genre with a modern-day Pop Art twist in works such as Skull from 1976; a blood-red still-life painting saturated with a punk aesthetic, and inspired by a human skull he bought in Paris at a flea market the year before.

Coinciding with the anniversary of the artist’s death, Heaven and Hell Are Just One Breath Away! follows hot on the heels of LEGENDS: WARHOL/BASQUIAT. A joint exhibition in China, LEGENDS debuted at the inaugural Shanghai International Artwork Trade Mont before travelling to Sotheby’s S|2 Gallery in Hong Kong last November.

About S|2: S|2 is a secondary gallery space in London at 31 St. George Street. The gallery space operates separately from the auctions and the programme is laid out independently of the auction seasons. Since 2017, the gallery’s exhibition programme is organised by Darren Leak and Bianca Chu, with support by gallery manager Liberty Paterson. The aim of the space is to mount research-based, critical exhibitions focusing on the edges of art history and to shine a light on artists that may be under recognised by the market. 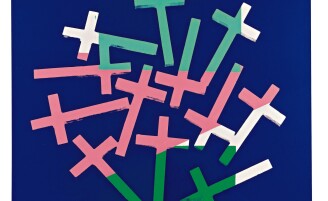