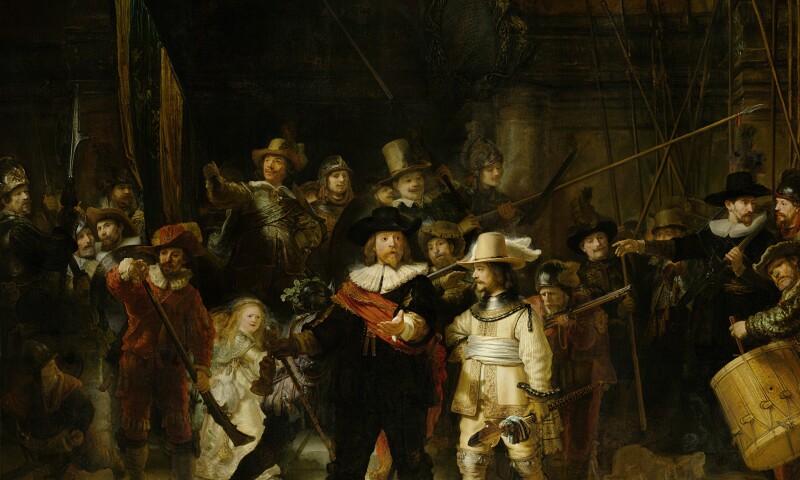 Rijksmuseum visitors will be invited to watch the restoration of The Night Watch, Rembrandt’s most celebrated masterpiece next year. The project will begin in July 2019 and the public will be able to watch the entire process at the museum and online.

Before the restoration begins, The Night Watch will be the centrepiece of the Rijksmuseum’s display of their entire collection of more than 400 works by Rembrandt in an exhibition to mark the 350th anniversary of the artist’s death opening on 15 February 2019.

Commissioned in 1642 by the mayor and leader of the civic guard of Amsterdam, Frans Banninck Cocq, to create a group portrait of his shooting company, The Night Watch is recognised as one of the most important works of art in the world today and hangs in the specially designed “Gallery of Honour” at the Rijksmuseum. It is more than 40 years since The Night Watch underwent its last major restoration, following an attack on the painting in 1975.

The Night Watch will be encased in a state-of-the-art clear glass chamber designed by the French architect Jean Michel Wilmotte. This will ensure that the painting can remain on display for museum visitors. A digital platform will allow viewers from all over the world to follow the entire process online continuing the Rijksmuseum innovation in the digital field.

(Image courtesy of the Rijksmuseum, Amsterdam.)

Type: story
Category: Museums
Rembrandt Around the World: Exhibitions on View in 2019