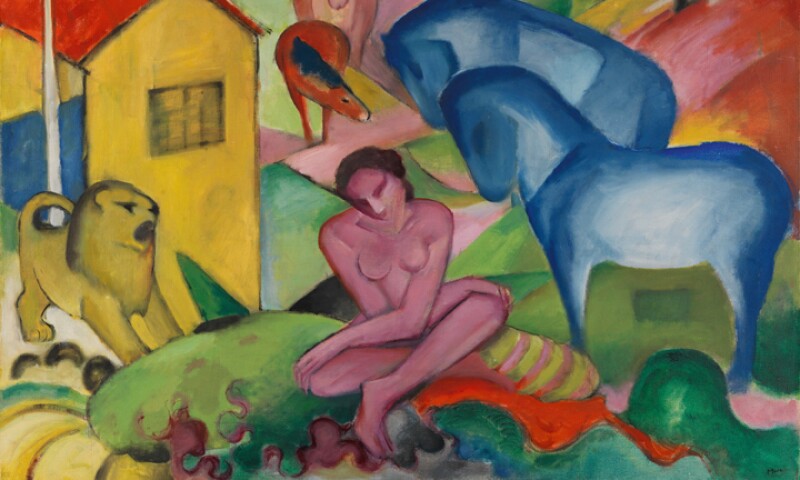 This exhibition presents two major figures of German Expressionism and the Der Blaue Reiter [The Blue Rider] movement, Franz Marc (1880-1916) and August Macke (1887-1914). These artists forged a friendship in 1910 based on their shared interest in French art and more specifically in Cézanne, Van Gogh, Gauguin and Fauvism, who they discovered during their time in Paris. Both expressed the same spiritual fascination for landscapes and nature in their initial paintings, often painted "en plein air".

Their paintings took a more radical, stylised turn when they met Vassily Kandinsky in 1911 and founded the Der Blaue Reiter Almanach [The Blue Rider Almanac]. Franz Marc abandoned plein air painting in favour of his famous blue horses which inspired the title of the almanac. While Marc co-edited the Almanach with Kandinsky, August Macke compiled the ethnographic visuals and wrote a study on African masks. Highly active in their field, they also helped organise international avant-garde exhibitions like the ones held in Cologne in 1912, and in Berlin in 1913, while continuing to develop their art. As part of this evolution, Franz Marc turned to Abstract art in 1913 under the influence of the Italian Futurists exhibition and Robert Delaunay’s paintings. Macke, for his part, moved away from Kandinsky’s intellectual spirituality and towards a clearer relationship between humans and nature, particularly during his travels to Tunisia with Paul Klee.

Drafted in 1914, both artists were killed in combat leaving unfinished yet emblematic works that represent the hedonist, colourful and seductive side of German Expressionism.