T he names Bertram and Diana Firestone have been synonymous with the sport of horse racing for well over half a century. Mr. Firestone celebrated his first great victory in May 1971 when King’s Company landed the Irish 2000 Guineas at the Curragh before taking the Cork and Orrery Stakes at Royal Ascot in 1972. In 1980, following their purchase of Catoctin Stud, in Waterford, Virginia, Genuine Risk became the second filly in 65 years to win the Kentucky Derby and the only filly to place in all three races of the Triple Crown (2nd in the Preakness Stakes and 2nd in the Belmont Stakes). She was later inducted into the Thoroughbred Racing Hall of Fame. General Assembly, a son of Triple Crown winner Secretariat, was bred and raced by the Firestones; his spectacular 15-length win at the 1979 Travers Stakes at Saratoga set a track record that stood for decades. The Firestones became well known in Europe as well, where they operated the 1200-acre Gilltown Stud in Kilcullen, County Kildare, Ireland. Among many successful races on European soil, important wins included BlueWind’s 1981 win at the Epsom Oaks and Flash of Steel’s win at the 1986 Irish 2000 Guineas. They also campaigned April Run, the champion three-year-old filly in France in 1981. Gilltown Stud, located close to Curragh Racecourse, was purchased by the Aga Khan in 1989 and continues to operate today under his auspices. The Firestones also won the second running of The Japan Cup with their horse Half-Iced. In addition, they were the breeders of Vintage Crop, the 1983 winner of the historic Melbourne Cup in Australia.

Linking these victories is the Firestones’ first-hand experience with the sporting world, both were avid showjumpers and hunted in Virginia with the Piedmont and Middleburg Hunts and were Joint-Masters of the Kildare Foxhounds in Ireland, while consistently taking a hands-on approach to the training of their horses. Inducted into the Virginia Thoroughbred Association Hall of Fame in 1982, the Firestones’ stewardship of Thoroughbred racing and horses, most recently at Newstead Farm, in Upperville, Virginia, has created a strong legacy within American horse-racing circles built on their great passion and generous support of the sport and earning them a near record seven Eclipse Awards.

Encompassing vibrant portraits of the Firestones’ famed thoroughbreds and a passion for equestrian pursuits extending from racing to hunting and steeple-chasing, this collection that hung at Newstead Farm reflects the couple’s long-standing love of the horse and personal mementos of a life lived at the forefront of the international racing world.

Firestone Success on the Track

The Firestone farms in Virginia and Ireland produced stars, from Genuine Risk, only the second filly to win the Kentucky Derby to King’s Company and Red Alert. The Firestones’ successes at the most revered racecourses in America, including Churchill Downs and Belmont Park, are depicted in the pictures in this collection. 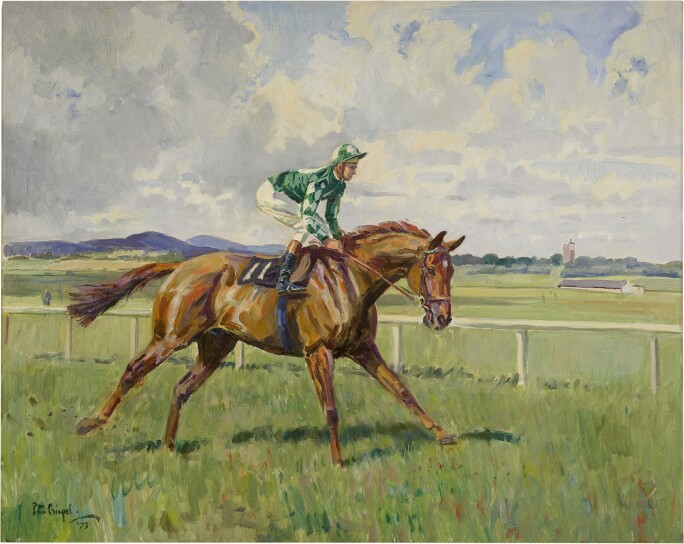 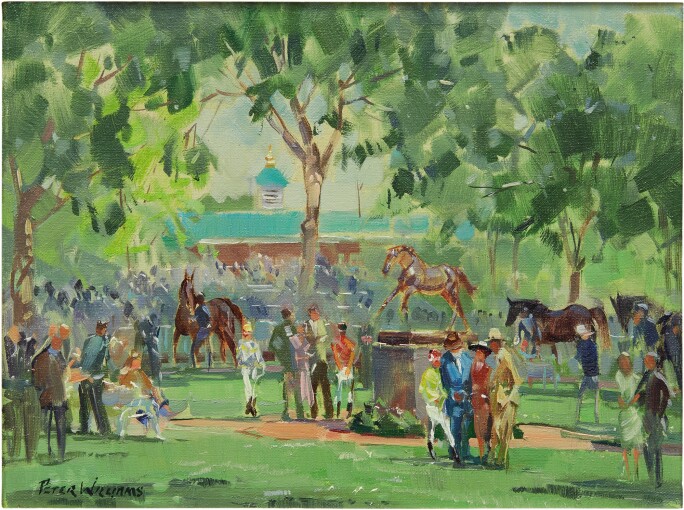 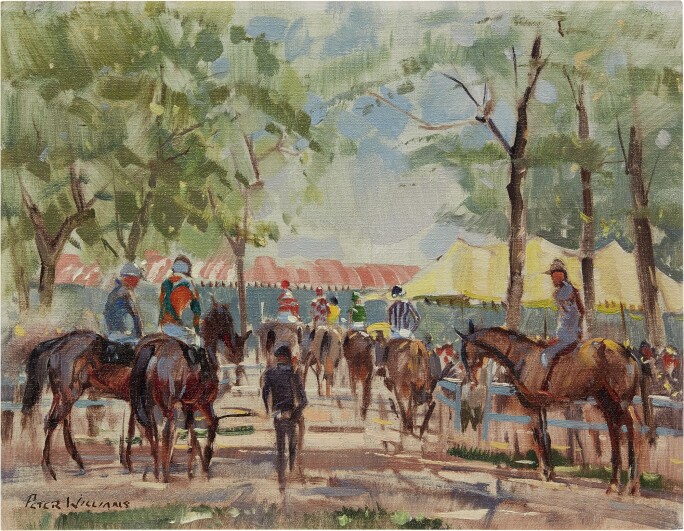 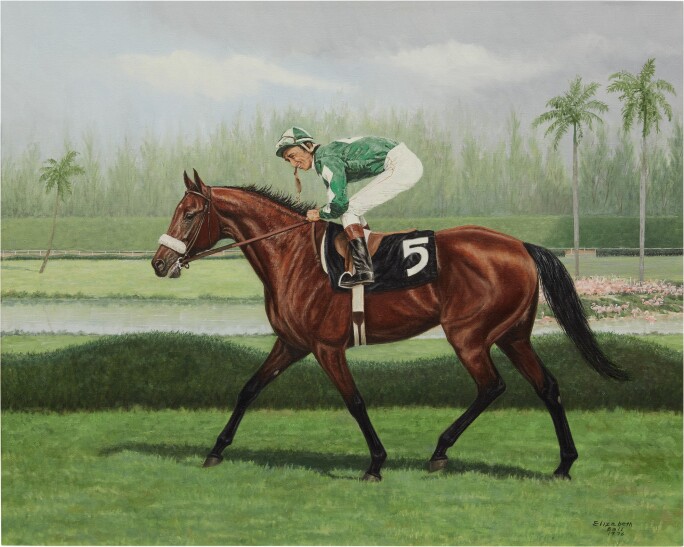 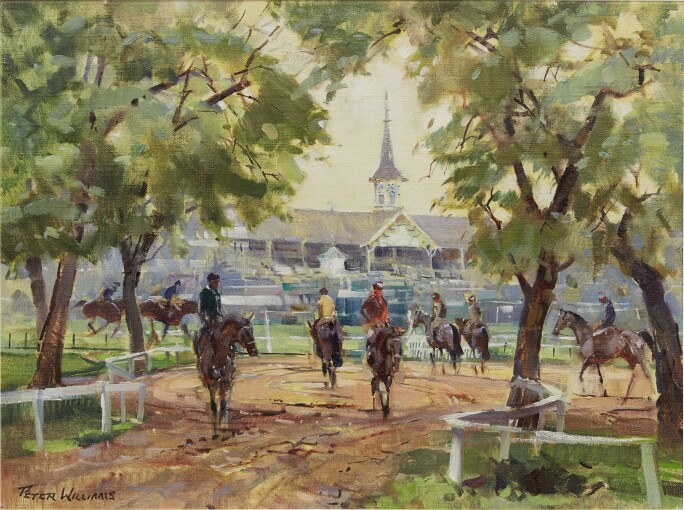 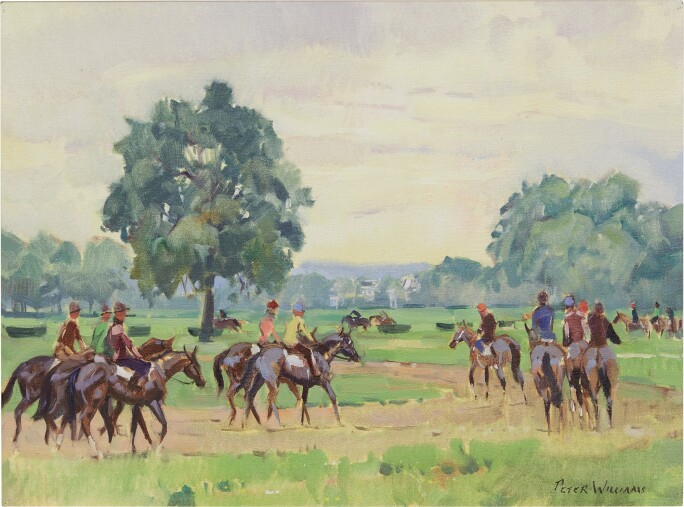 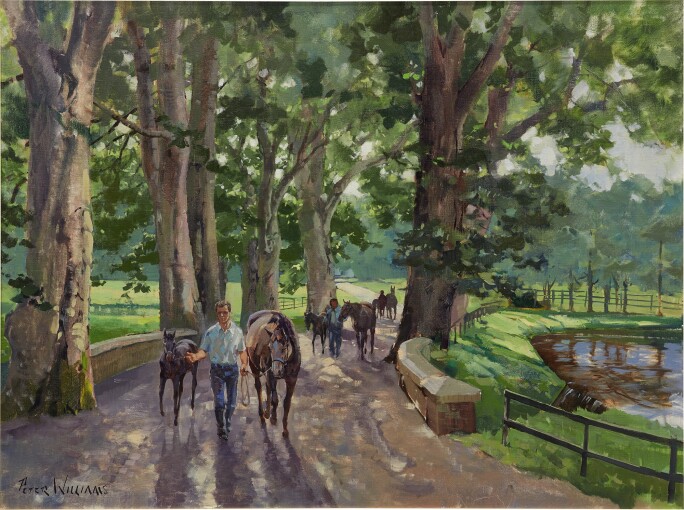 And They’re Off: Racing in Art

At the heart of the Firestone’s passion for horses lies Thoroughbred racing. From the frenzied excitement of pre-race bidding, as depicted in Lee Townsend’s Bookies, to the rush of racing horses in Peter Curling’s Sprint Finish the excitement of race day is palpable in this collection. 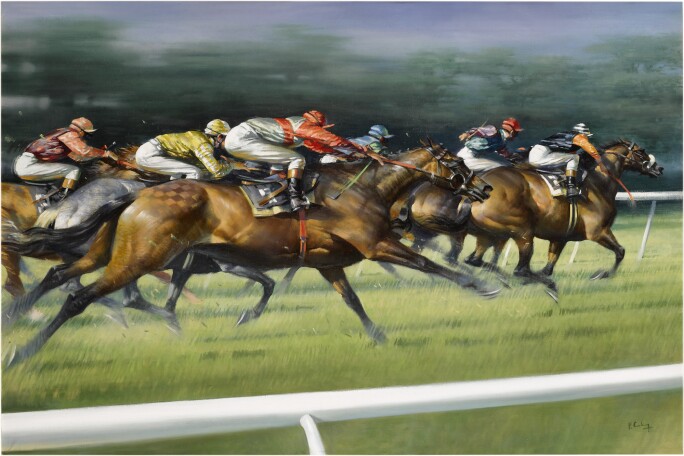 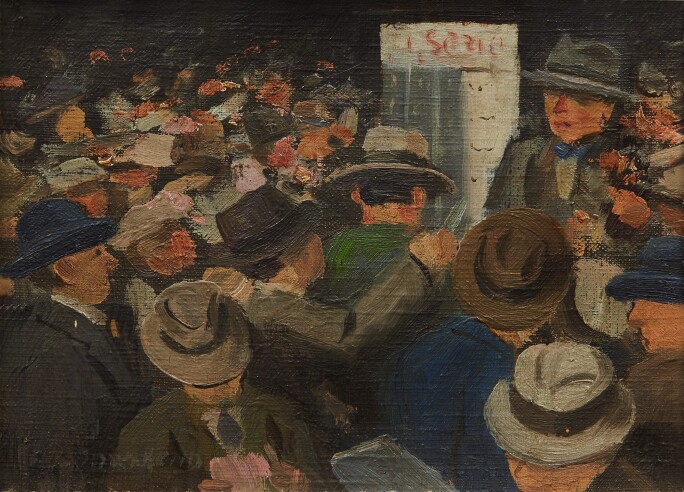 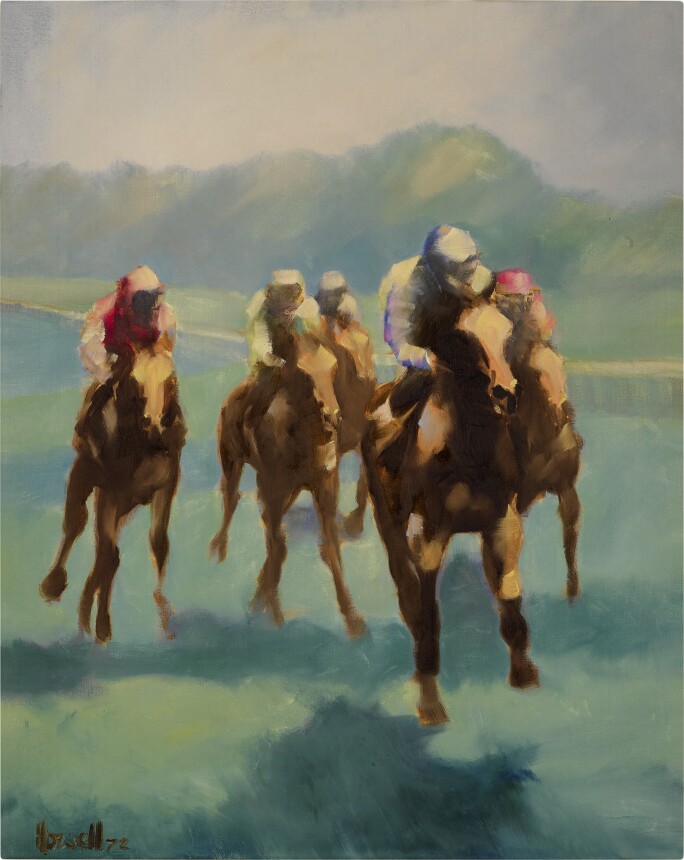 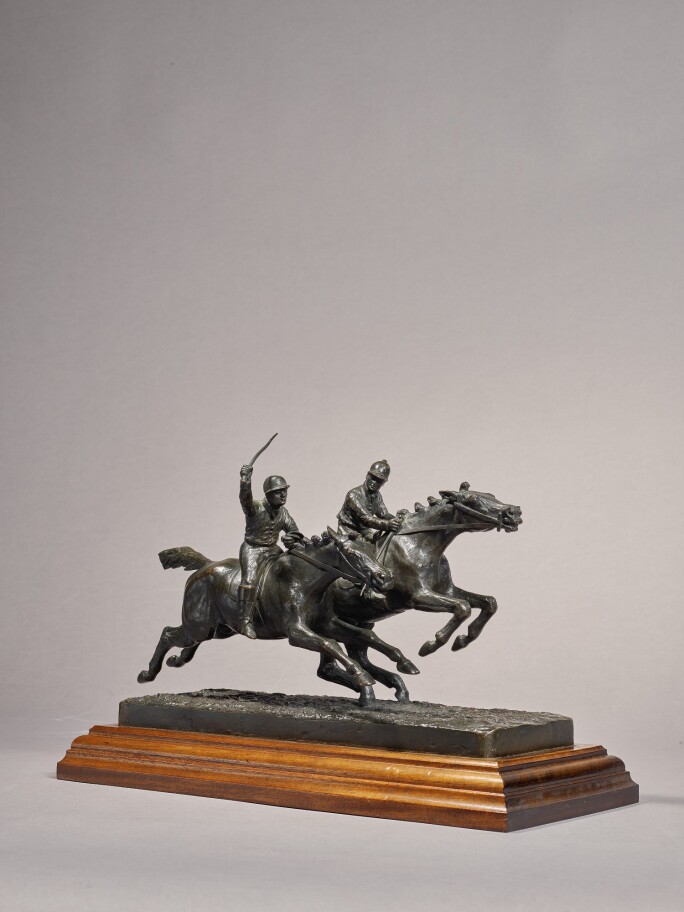 Thrill of the Chase

In 1991, the Firestones acquired Newstead Farm, nestled in the hunt country of Upperville, Virginia and they rode in Ireland with the Kildaire Hunt. Paintings in the collection by artists from Henry Koehler to Peter Howell capture hunting hounds and horses from the 19th century to today illustrating the longstanding appreciation of sport. 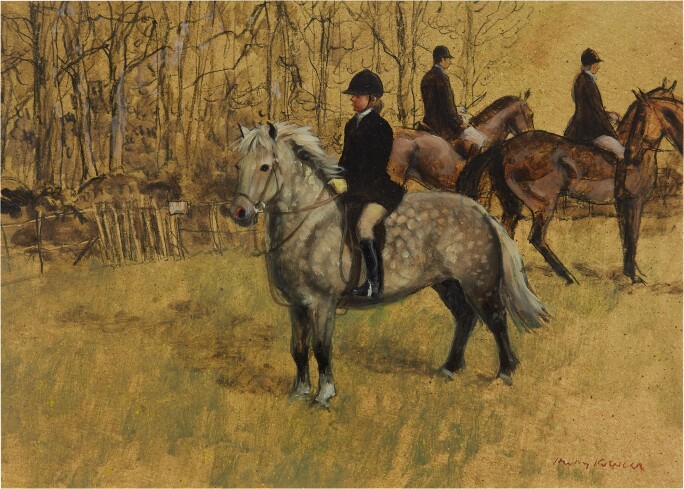 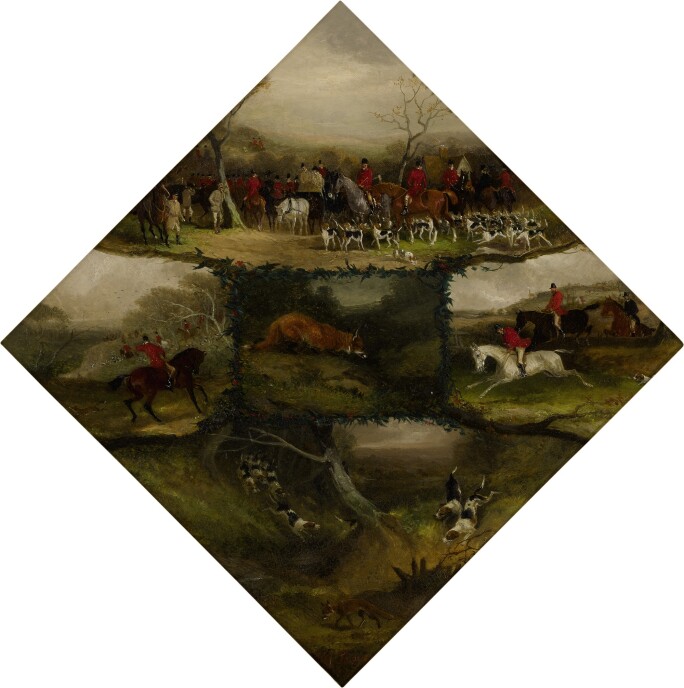 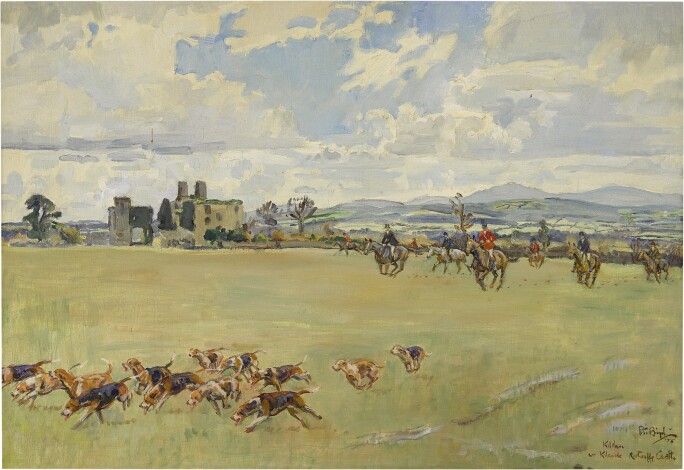 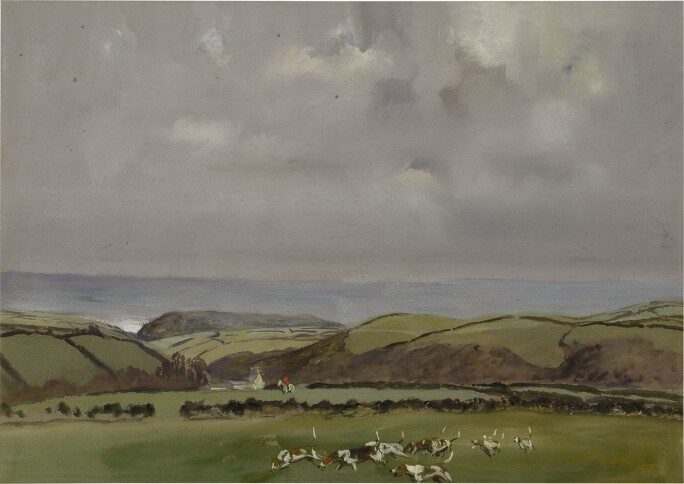 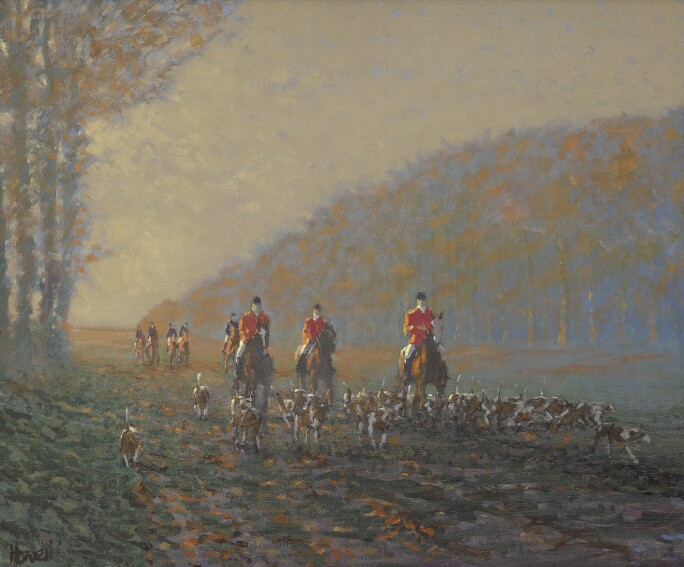 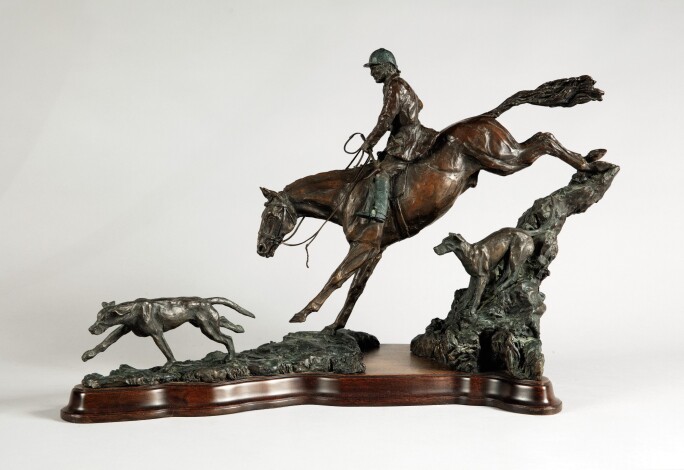