S otheby’s is honoured to offer a curated selection of some of the most iconic portraits ever made by the legendary British photographer Terry O’Neill, CBE. In collaboration with his archivist Iconic Images, this is the first selling exhibition in the UK since O’Neill’s passing last November 2019. As one of the world’s most collected photographers with works in national galleries and private collections worldwide, O’Neill photographed world leaders, artists, film stars, and icons of music, for more than six decades which helped shape the way the world viewed popular culture. 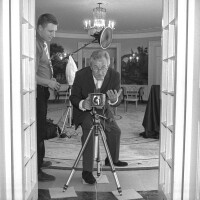 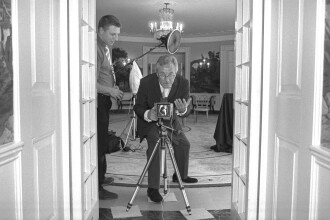 Terry O'Neill was a young unknown photographer when he was commissioned to shoot a few portraits of a new band at Abbey Road Studios before the release of their first hit single Please, Please Me in 1963. The portrait ran in a sold-out paper the day after and the rest is history: the band would become known as The Beatles.

From that moment onwards, O’Neill would become the creator of some of the most emblematic and quintessential images in the music industry. Paying close attention to what has happening in Britain during the Swinging Sixties, he captured the essence of the early Rolling Stones in images such as 'The Rolling Stones outside the Tin Pan Alley Club', 1963 and 'Mick Jagger in a Fur Parka', 1964.

A decade later, during the 1970s, he would pioneer backstage reportage photography with David Bowie, Elton John, and many others. Images such as 'Elton John At His Home In Windsor', 1974 or 'David Bowie, Diamond Dogs', London, 1974 adorned historic albums, and other like 'David Bowie (With Scissors)', Los Angeles, ca. 1974 graced international magazine covers.

His take on portraiture was never outdated – O’Neill was always at the forefront of the medium. In the 2000s, the photographer continued shooting some of the most iconic portraits of the past decade, as is the case with 'Amy Winehouse poses for a portrait during a concert', 2008.

“I’m a reportage photographer, and I just like fading into the background {…} The more discrete you are the better off you are.”

However, it was Hollywood that really brought to his practice all the vibrance and colour he was looking for. Thanks to a letter from Ava Gardner, O’Neill was granted unprecedented access to Frank Sinatra’s private life for over three decades, amongst which he shot the famous photograph, 'Frank Sinatra On The Boardwalk', Miami, 1968. A few years later in 1977, O’Neill photographed his girlfriend at the time, 'Faye Dunaway at the Beverly Hills Hotel', lounging by the pool, her just-won Oscar for Best Actress standing next to her breakfast tray; this languid portrait of Hollywood decadence has remained one of O’Neill’s most memorable compositions.

Terry O’Neill had the chance to shoot five Bonds and over twenty Bond Girls, as in 'Honor Blackman for 'Goldfinger'', 1964 spanning the history of the film franchise. One of the most notable images from this period is undoubtedly the simple yet powerful portrait of 'Roger Moore poses with a gun as James Bond', 1973, which englobes the characteristics of the true gentleman we know as James Bond.

“I went to the set of Live and Let Die thinking I’d see Roger Moore, but I came out knowing that I just took photos of James Bond.”

Stemming from Terry O’Neill’s interest in pop and youth culture, he came to depict some of the most notorious faces during the past six decades. It of course all stated with the Swinging Sixties, with striking candid shots of iconic figures such as 'Jean Shrimpton walking barefoot in London', 1963.

However, the photographer’s search for beauty would not solely rest in his London hometown, he would find his inspiration everywhere. Some early examples are O’Neill’s delicate portrait of 'Audrey Hepburn with Dove', South of France, 1966 which was taken during the filming of ‘Two for the Road’, or one of his most celebrated images, 'Brigitte Bardot, Spain', 1971.

The years of experience made O’Neill into an undisputed talent recruiter. He was one of the first photographers to shoot super model 'Naomi Campbell', 1992 and 'Kate Moss', 1993 at the beginning of their careers. About Moss he remembered, “I was at a modelling agency and I saw this young girl sitting in the office. She just struck me and I knew she’d take a great photo. She just had something incredibly special and I could see that straight away. We arranged a time for a photo shoot – and these are two of the first photos I took of Kate Moss.”