S otheby’s June Spirits Sale in London features some of the rarest whiskies and Moutai ever to come to auction. Leading this sale is no less than 24 bottles of Kweichow Moutai “Sun Flower” 1974, housed in their original wooden shipping crate. This is not only the first Moutai lot that Sotheby’s has auctioned in the UK, but also the most valuable Moutai lot we have offered to date.

Also from Asia, an exceptional selection of Japanese whiskies from Yamazaki, Hibiki, Hanyu and Saburomaru are led by a collection of 32 bottles of Karuizawa, all from a single collection known as The Unbeatable Collection of Karuizawa. Most notable is the Karuizawa Cask #5267 1960, formerly the world’s most valuable whisky when it sold at Sotheby’s in March 2020 for £363,000. This is the first time a bottle from this cask has been seen at auction since that record was set.

Scotch Whisky features heavily in this sale with outstanding Single Malts from Speyside to Islay. Included in the running list are 40 Year Old whiskies from Glenfarclas and Balvenie, a 50 Year Old from Bowmore, a 70 Year Old Glenlivet from Gordon & MacPhail and last but not least, The Macallan 78 Year Old, the oldest whisky ever to be released.

Scroll through to view more spirits 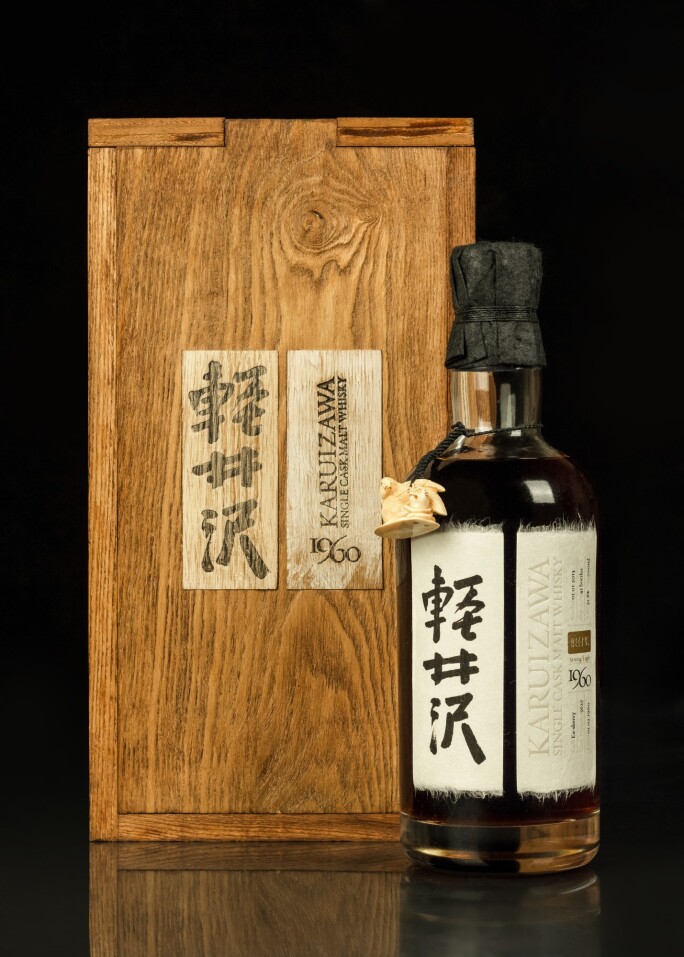 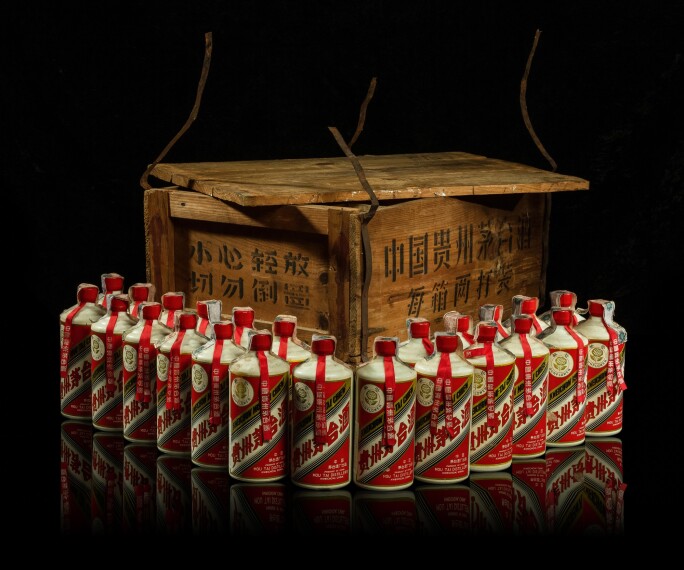 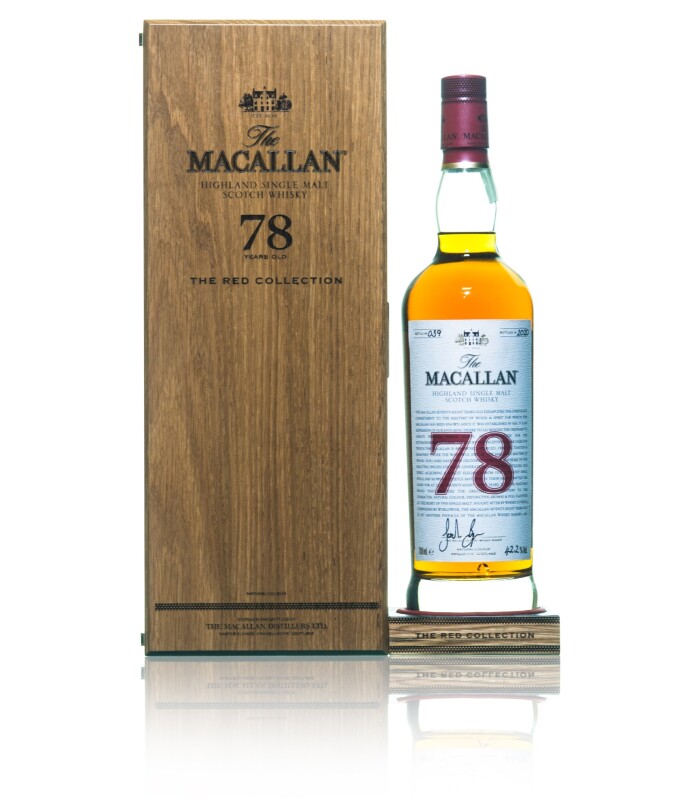 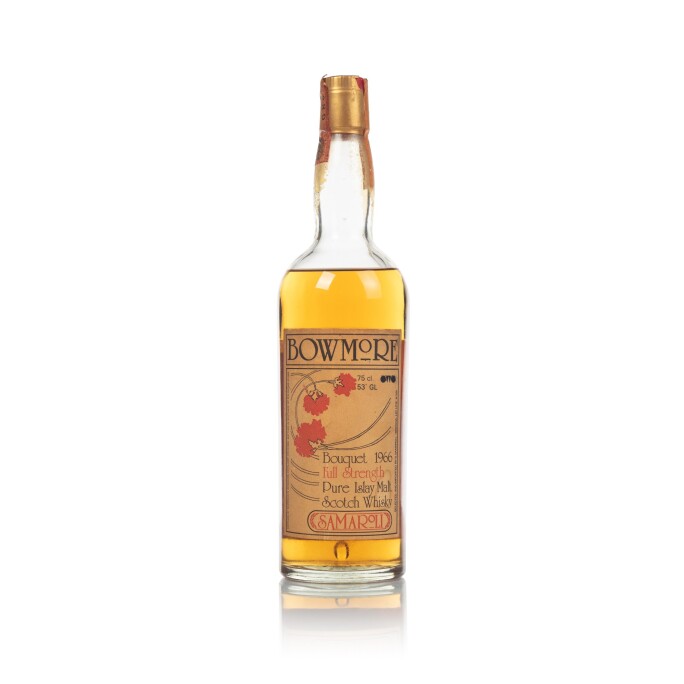 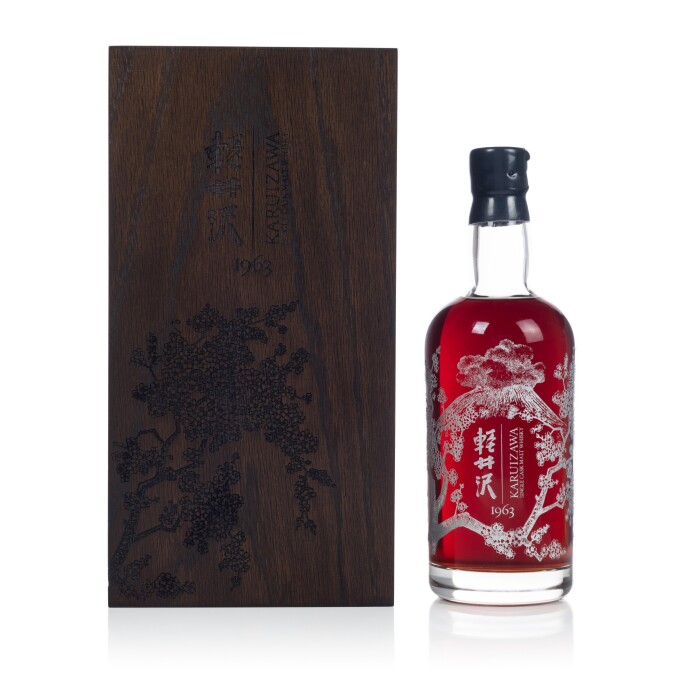 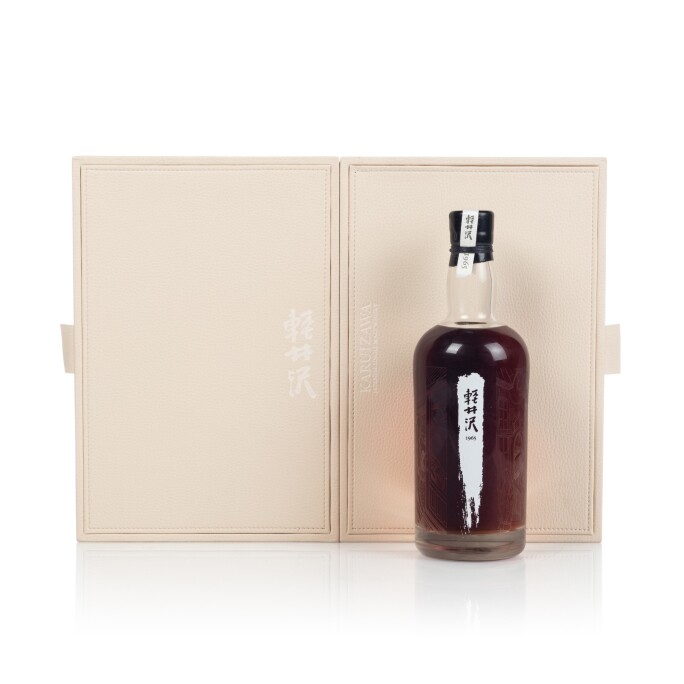 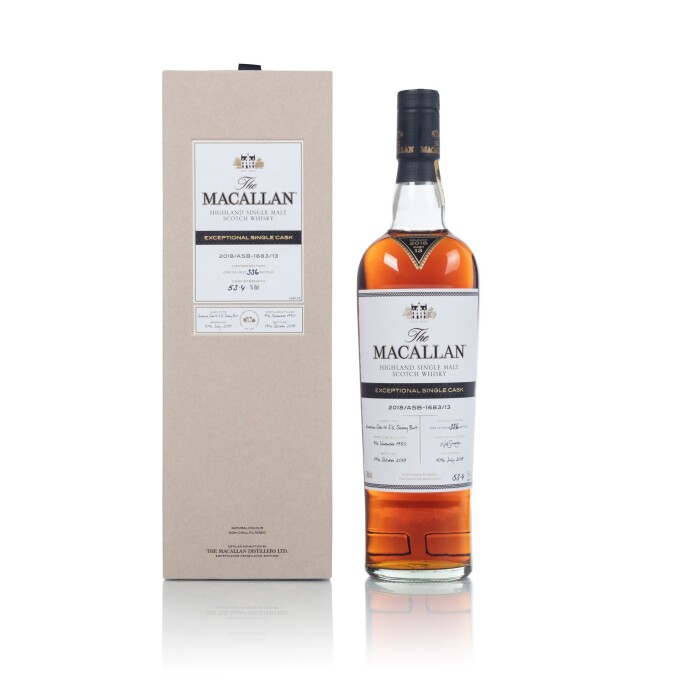 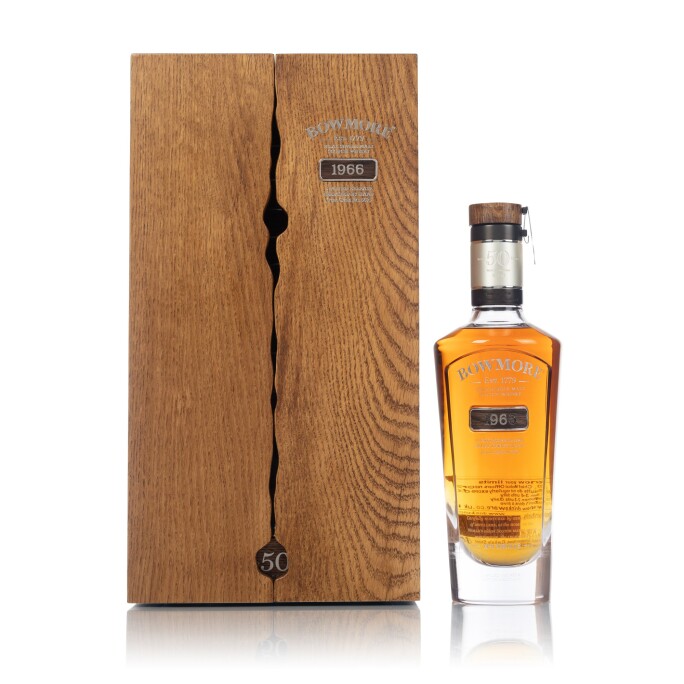 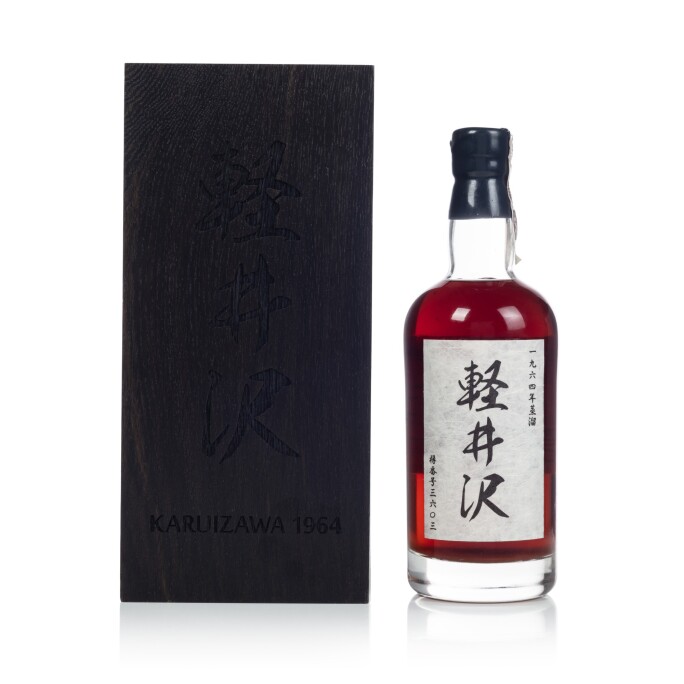 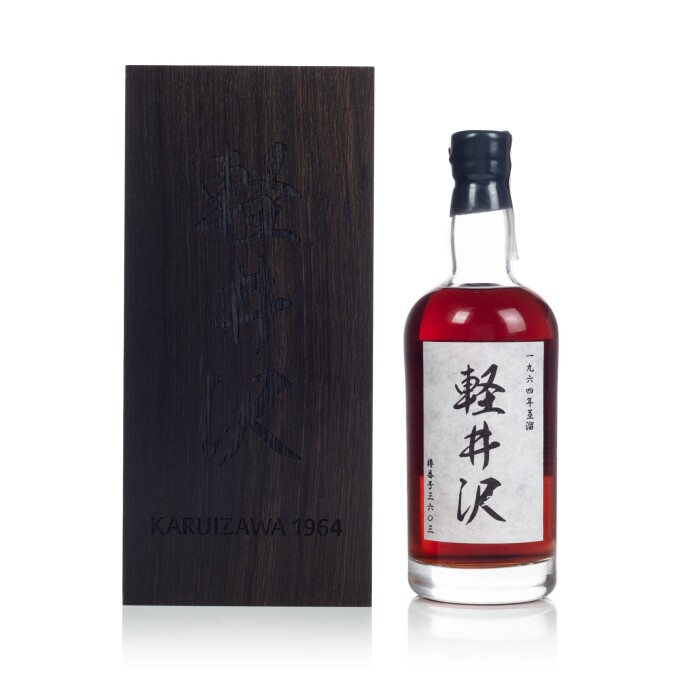 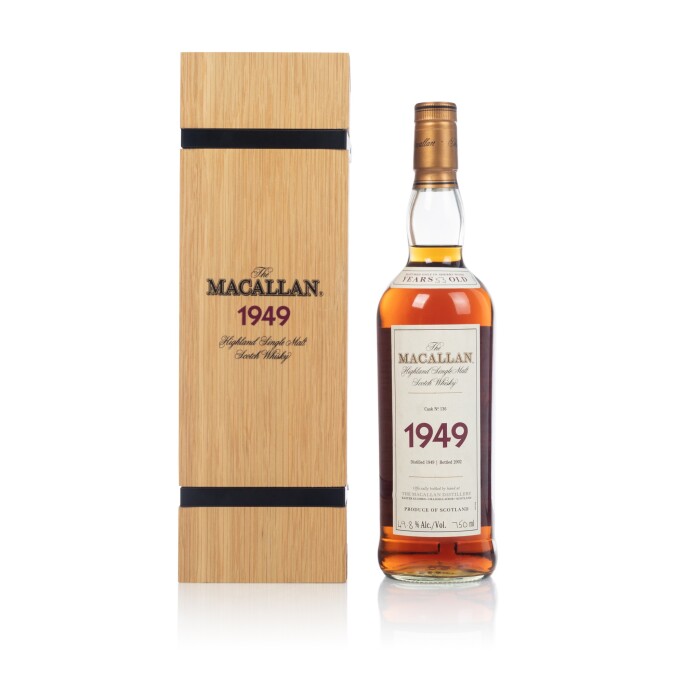 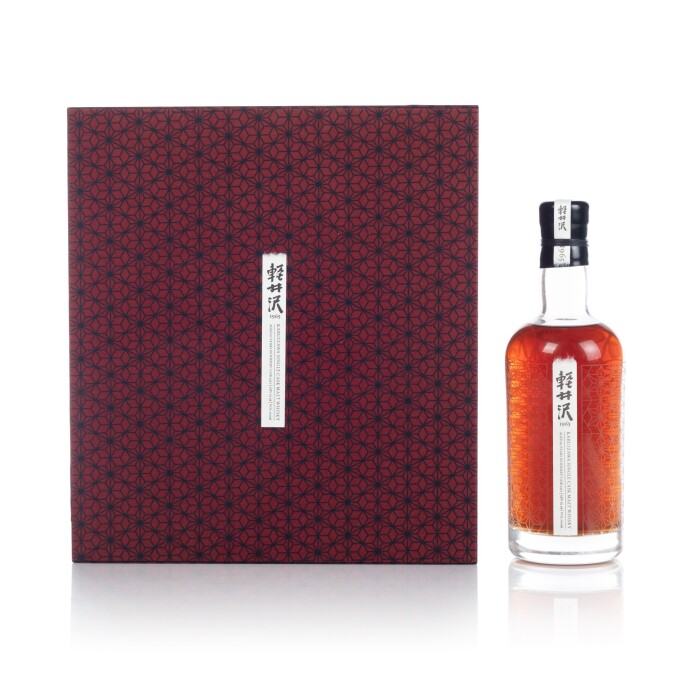 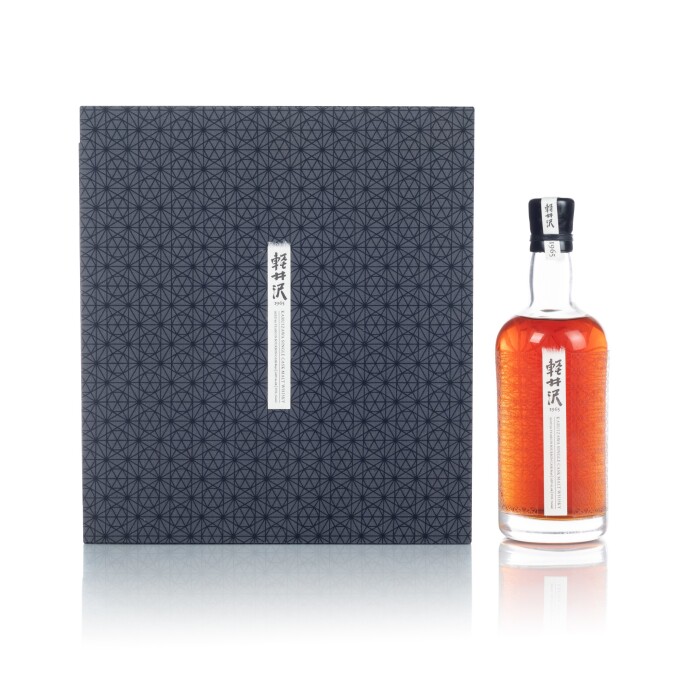 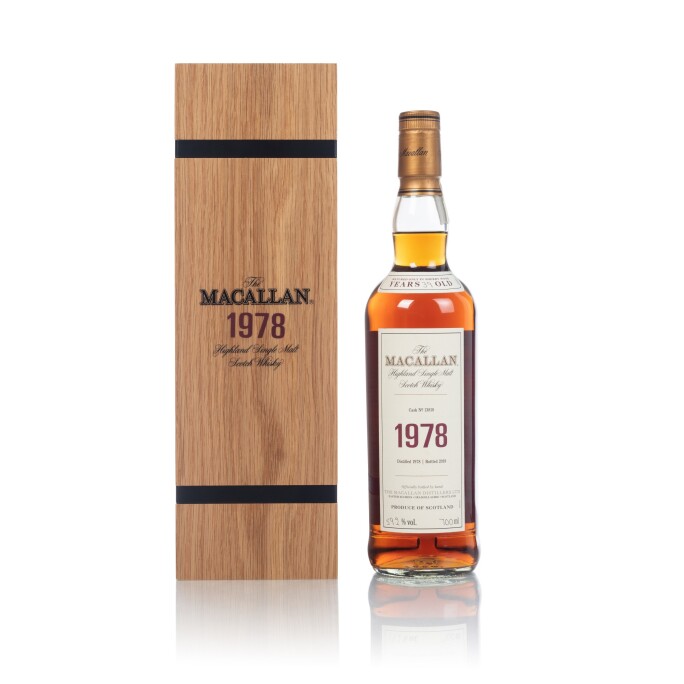 An original wooden case of 24 bottles of Kweichow Moutai “Sun Flower” 1974 headlines the June Spirits sale. The bottles are in pristine condition, and each is housed within its own compartment in its original shipping crate, complete with original nails to hold the lid down. This is both the first time Sotheby’s has offered Moutai for sale in the UK and the most valuable Moutai lot we have ever offered.

“Sun Flower” Moutai holds a unique place not just in Moutai distillery’s history, but also in that of China’s. The “Sun Flower” replaced “Flying Fairy” for the export branding during the cultural revolution. The “Flying Fairy” logo, originating from the Maogao cave drawings in Dunhuang, was categorized as one of the “four olds” and thus, deemed inappropriate to be continued to be featured on Moutai bottles.

“Sun Flower" Moutai was first introduced in 1969, with the last batch coming out into the market around 1983. According to official records, 1974’s production for the export market is only 36.2 tons, compared with its total production of 664.5 tons, which makes it highly sought after.

We are delighted to present what is surely the most impressive collection of Karuizawa ever to come to auction from a single collector. This fantastic ensemble of bottles from one of the world’s favourite closed distilleries is lead by none other than the Karuizawa Cask #5627 distilled in 1960. In 2020 this bottle sold at Sotheby’s for £363,000, making it at that point the most valuable Japanese Whisky ever sold.

Founded in the 1950s, Karuizawa was a distillery whose future was always uncertain, not least because it was located at the foot of the active volcano, Mount Asama in Nagano Prefecture.

Karuizawa began its life under the ownership of Daikoku-Budoshu, a Japanese wine company with vineyards in Nagano who were looking to expand their portfolio. Karuizawa’s malt was destined to be used in blends and bottled under the name Ocean. Malted barley was difficult to come by in Japan, so Karuizawa began to buy their malt from Scotland. They imported Golden Promise, the same varietal used at Macallan at the time, and once distilled on their small stills they tended to mature the distillate in high quality sherry casks, which also sounds very similar to Macallan’s process. The quality of Karuizawa’s output was high, so high in fact that whisky sales of Ocean began to outperform Daikoku-Budoshu’s wine sales by both volume and value.

As sales increased, Karuizawa’s owners decided to change their company name to Ocean Whisky Co. Ltd to represent their leading brand. Not long after, they merged with Yamanashi Distillery owners Sankrau Shuzo to become Sankrau Ocean. With two malt distilleries now in operation, Karuizawa and Yamanashi were put to a taste test to see which distillery should be chosen as Ocean’s primary outlet. Karuizawa’s whisky was considered far higher quality and became the company’s leading distillery.

Karuizawa’s production continued throughout the 60s and began to gain some popularity in the 70s, however, similarly to Scotch, Japanese whisky went through a decline in the 80s with a drop in sales across the country. Sankrau Ocean changed its name to Mercian in the 90s and began to focus on single malt production from Karuizawa, however this may have been too little too late, and on December 31st 2000 Karuizawa Distillery was mothballed and closed its doors for the last time. The following year a 12 year old Karuizawa was awarded Gold at London’s IWSC and marked the beginning of Japanese whisky’s rise to global popularity.

Mercian was absorbed by Kirin between 2006 and 2010 and the remaining Karuizawa inventory of only 364 casks was sold to a company by the name of Number One Drinks, the oldest among them being Cask #5627, filled in 1960. When this whisky was released in 2013 at 52 years of age it was the oldest Japanese whisky ever to be bottled and the most expensive whisky ever to be sold when it retailed for 2 million yen, double that of the Yamazaki 50 year old which previously held both records.

Karuizawa Distillery was finally demolished in 2016 and so ended a legendary era in the history of Japanese Whisky.

The Scotch Whisky in our June sale is headlined by two outstanding bottles distilled at Bowmore Distillery on Islay. Both were distilled in the 1960s, a key era in the history of production at Bowmore, and one which is revered amongst whisky enthusiasts and collectors.

The 1960s were a period of much change at Bowmore, as the distillery passed ownership to that of Stanley P. Morrison. It was in this era that Bowmore distilled some of the most coveted whiskies ever produced, including two which we are offering in this sale. The era is seen as iconic in the history of whisky production at Bowmore, producing whiskies which were densely rich with tropical fruit flavours, blending seamlessly with a light Islay smoke that ran through the core of each expression.

1966 was an important year for Bowmore. It was the first year that Bowmore bottled whisky under its own name, and it was the year that distillery manager Eddie MacAffer joined the company. Eddie retired in 2016, being awarded the lifetime achievement by Whisky Advocate magazine for his contribution to Scotch Whisky.

Bowmore Samaroli Bouquet 1966 is considered to be one of the greatest whiskies of all time. Distilled in 1966 at Bowmore and bottled around 18 years later in 1984 by the late Silvano Samaroli, this bottle has gone on to become a cult classic, scoring 98 points on Whisky Fun in its most recent tasting. Sotheby’s currently holds the record for this bottle, setting a price of £72,600 in October 2019.

At the other end of the age spectrum, the Bowmore 50 Year Old Number 1 Vaults 1966 is a long-aged expression from the same vintage. Bottled in 2017, only 74 bottles were produced, making it one of the rarest expressions of Bowmore ever released. The Oak presentation case in which each bottle is housed contains five hand-laid silver rings at its centre, one to represent each of the five decades of maturation.

Elsewhere in Scotland, we are offering a number of long-aged expressions in this sale from the Speyside region. Highlights include a bottle of Glenlivet Gordon & MacPhail Generations 70 Year Old 1940, the oldest whisky ever upon its release in 2010, as well as 40 year old expressions from The Balvenie and Glenfarclas, and a bottle of Mortlach Gordon & MacPhail 58 Year Old 1954.

Also in Speyside, The Macallan is strongly represented with highlights coming in the form of three expressions aged over 50 years. The Macallan Fine & Rare 53 Year Old 1949 was bottled in 2002 at 53 years old, making it one of the longest aged of all the Fine & Rare series. Bottled from cask 136, only 160 bottles of this exceptionally rare whisky were produced.

The Macallan The Red Collection 78 Year Old is not only the oldest bottle released from The Macallan, but the oldest age statement whisky ever released. 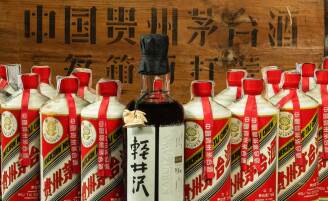