W e are delighted to announce the sale of Fine Japanese Woodblock Prints, with works by Utagawa Hiroshige, Utagawa Kuniyoshi, Tsukioka Yoshitoshi and Kawase Hasui. The sale begins with a selection of elegant bijin-ga [prints of beauties] by Katsukawa Shuncho, Eishosai Choki and Chobunsai Eishi, including the latter’s graceful rendering of Hanaogi of the Ogiya. These are followed by two private collections consisting of examples by Katsushika Hokusai, counting impressions of Yoshida on the Tokaido and Mishima Pass in Kai Province, and a large group of prints by Hiroshige, including his exquisite Black-Naped Oriole on a Stem of Rose Mallow. The sale continues with a selection of dramatic and vibrant depictions by Kuniyoshi, such as his triptych of the Ghosts of the Taira Attack Yoshitsune in Daimotsu Bay, and Yoshitoshi, including the New Forms of the Thirty-six Ghosts. These are accompanied by a group of 20th-century prints of graceful and mesmerising Beauties by Torii Kotondo and Ito Shinsui. The sale culminates in an extensive group of works by Kawase Hasui, counting a few impressions of atmospheric winter scenes. 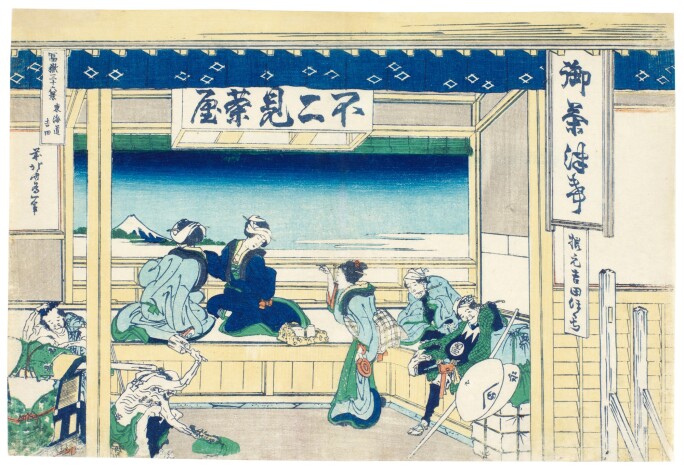 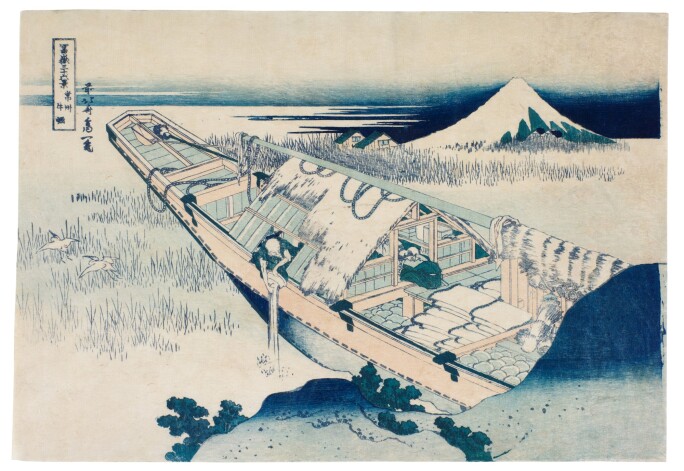 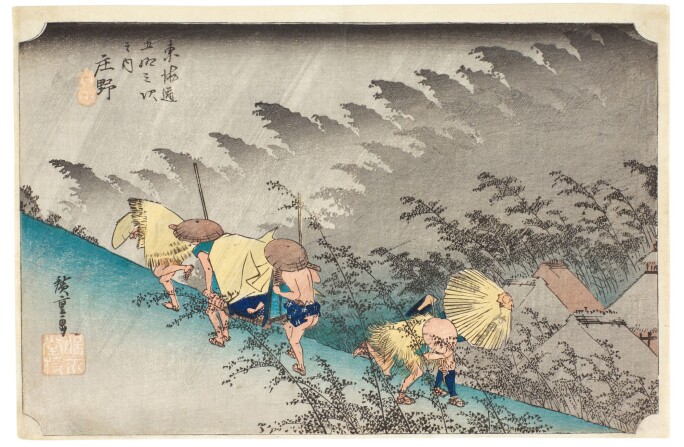 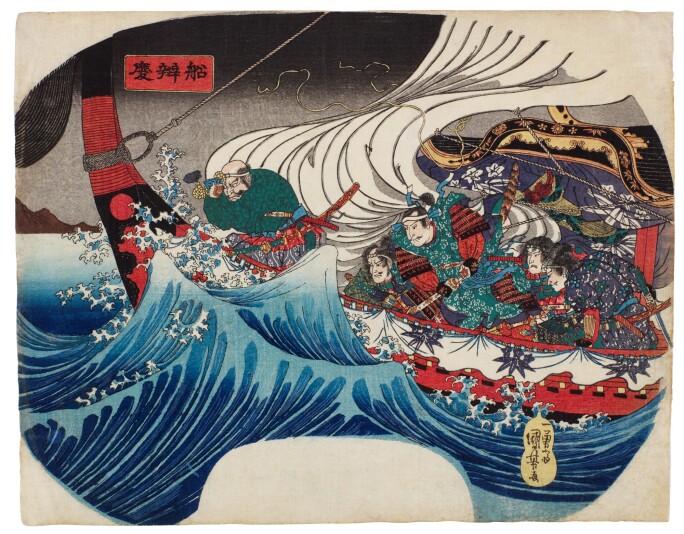 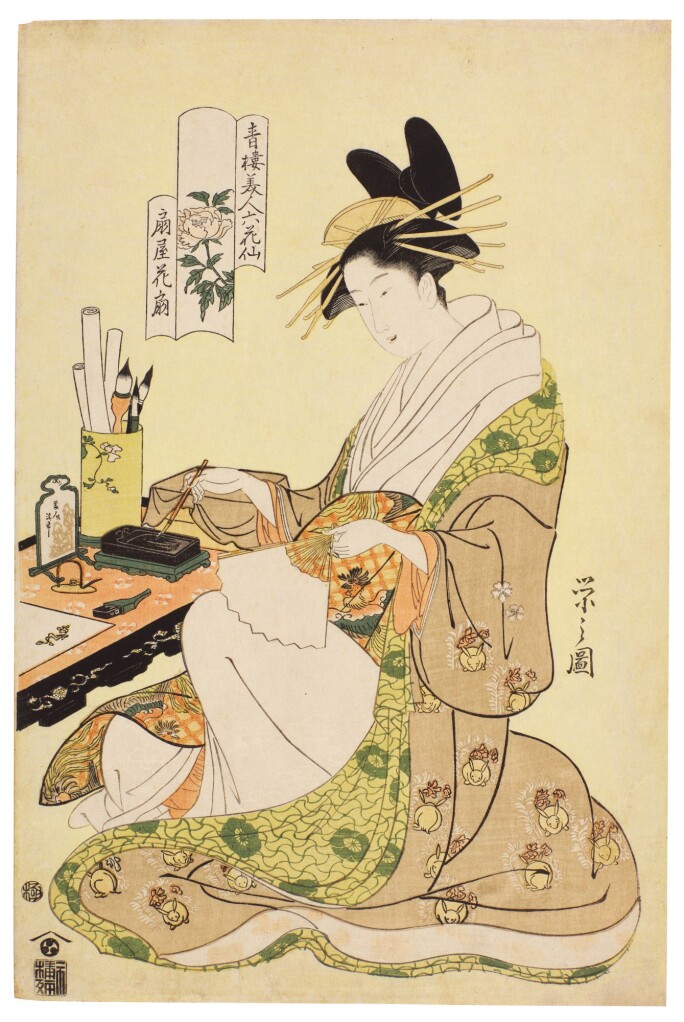 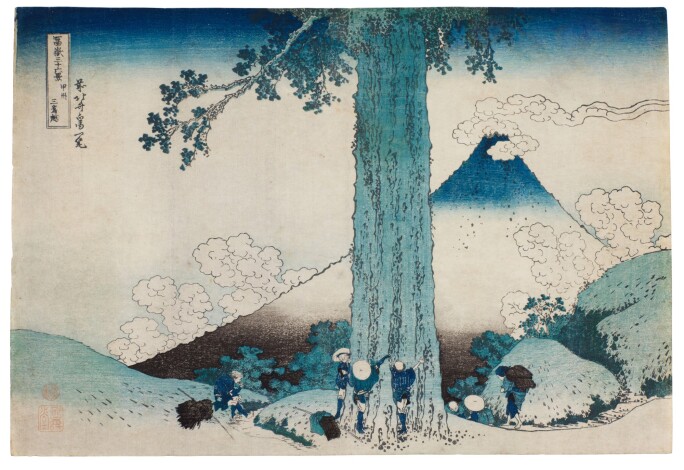 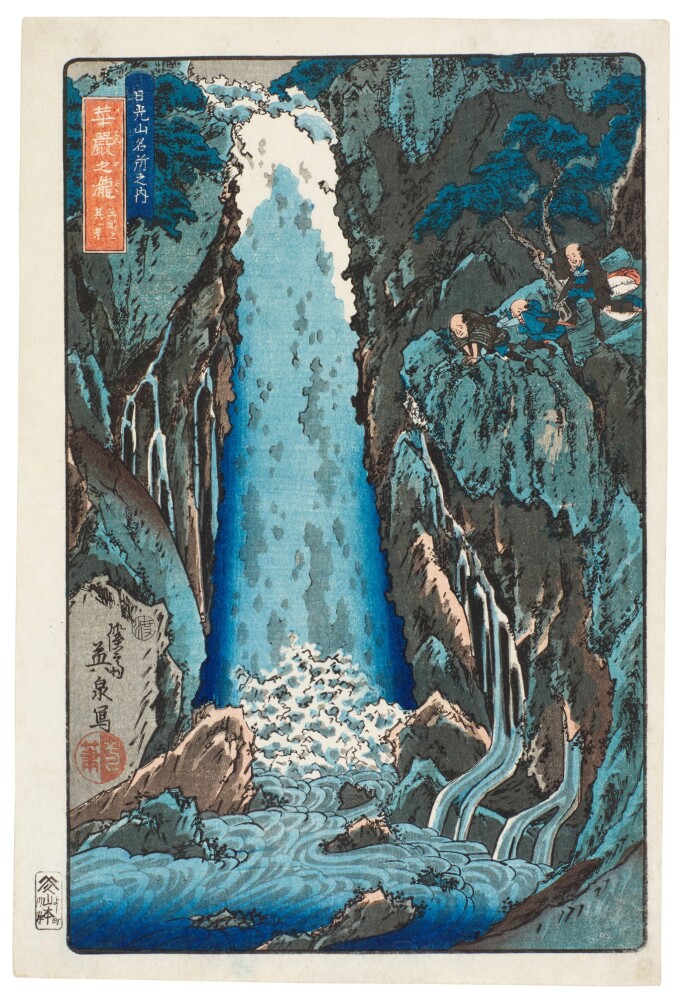 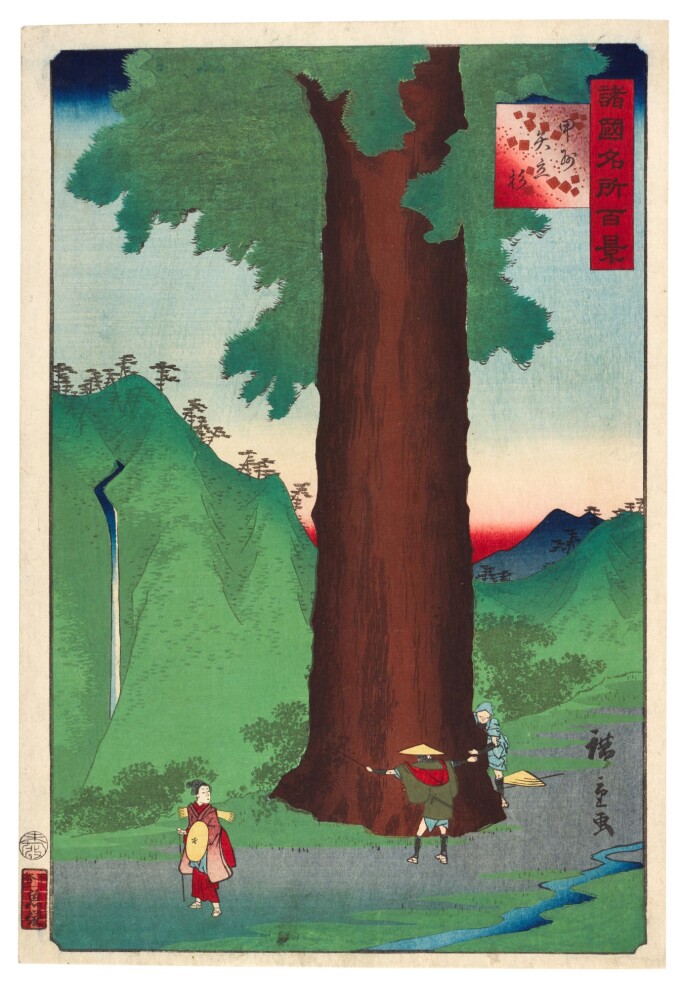 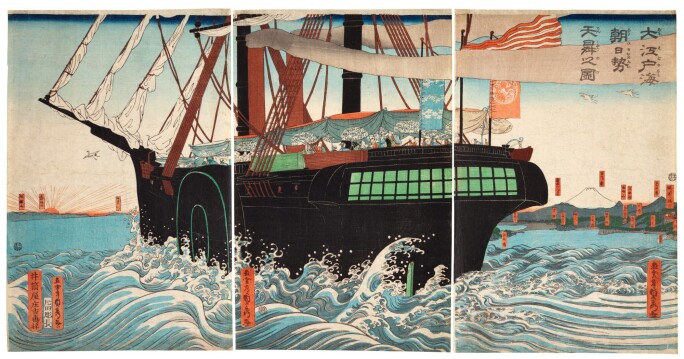 Utagawa Kuniyoshi (1798-1861) renders this legendary and literary episode with his distinctive penchant for drama and action. Extensively printed with Prussian blue, the triptych is lavishly dusted with mica powder, shimmering as it catches the light. The frightening scene recounts a tale famously dramatized in the Noh play, Benkei Aboard Ship (Funa Benkei), where the eponymous warrior monk manages to disperse a host of vengeful ghosts through prayer.

This selection of triptych prints by Tsukioka Yoshitoshi (1839-1892) showcase the artist’s highly impactful style. A pupil of Utagawa Kuniyoshi (1798-1861), Yoshitoshi clearly inherited his master’s visceral visual language and dynamism. Using the triptych medium to particularly great advantage, the dark and fantastical world of Yoshitoshi invites the viewer to witness great battles overrun by the tumult of warfare, or haunting visions populated with ghostly parades. 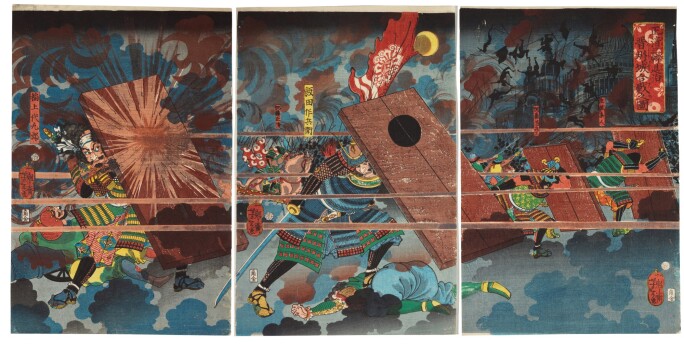 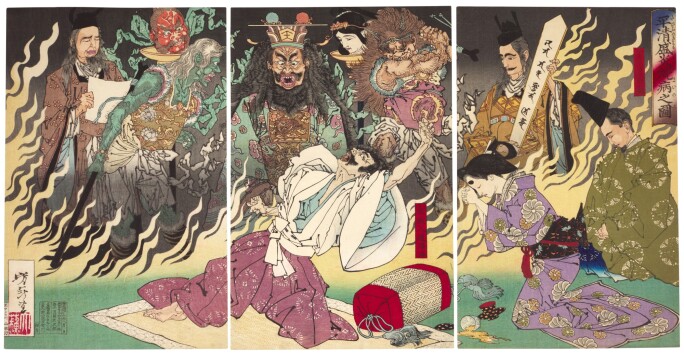 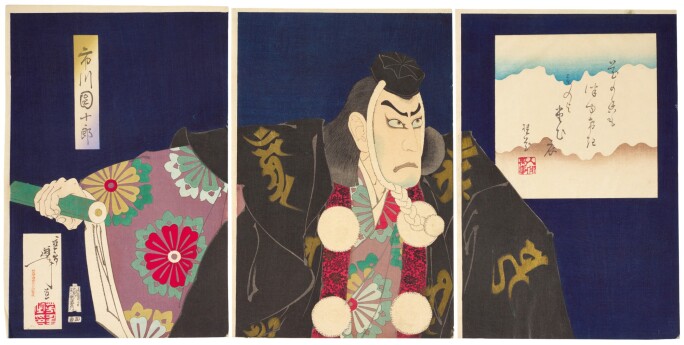 The following prints are some examples of Kawase Hasui’s (1883-1957) keen interest in capturing the effects of light within the woodblock medium. Mostly eschewed by earlier Japanese artists prior as something exotic or contrivedly western, Hasui successfully assimilated this aspect in his work through his studies in oil painting with the yoga [lit. western pictures] artist Okada Saburosuke (1869-1939). With a particular attention to the time of day, the fall of light and the season, Hasui’s idiosyncratic treatment of the woodblock print elegantly combines the popular Japanese landscape genre with a sense of painting en plein air. 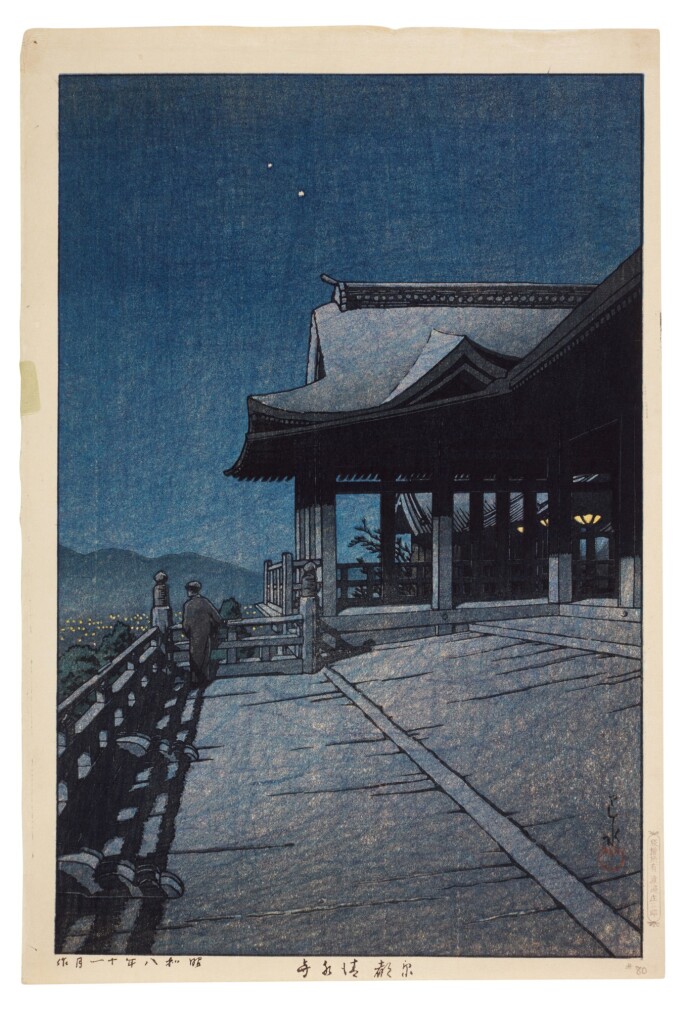 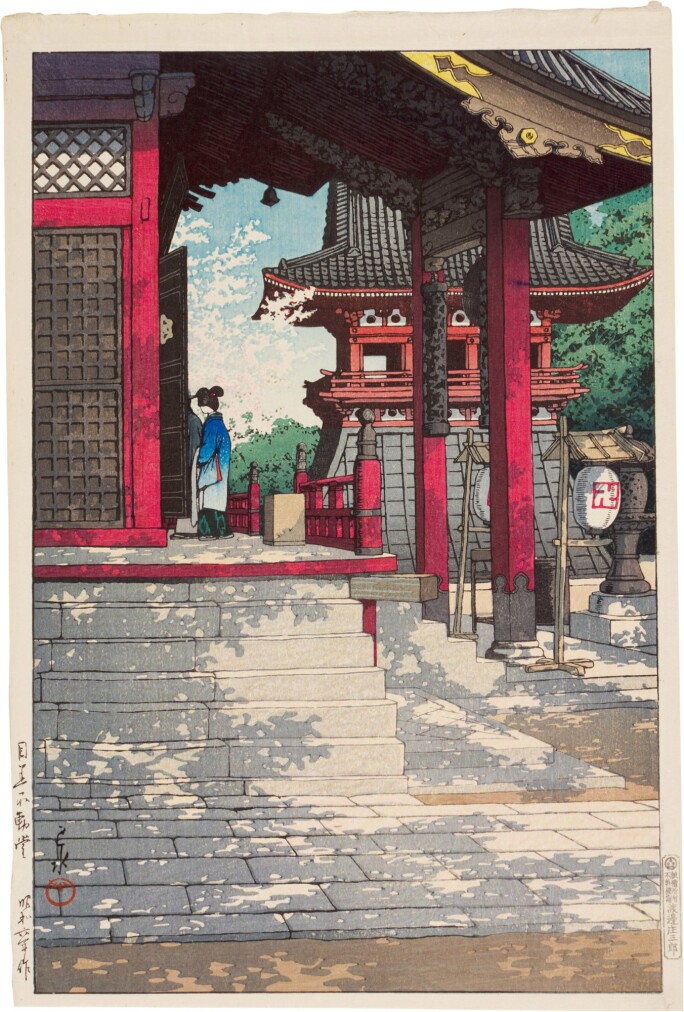 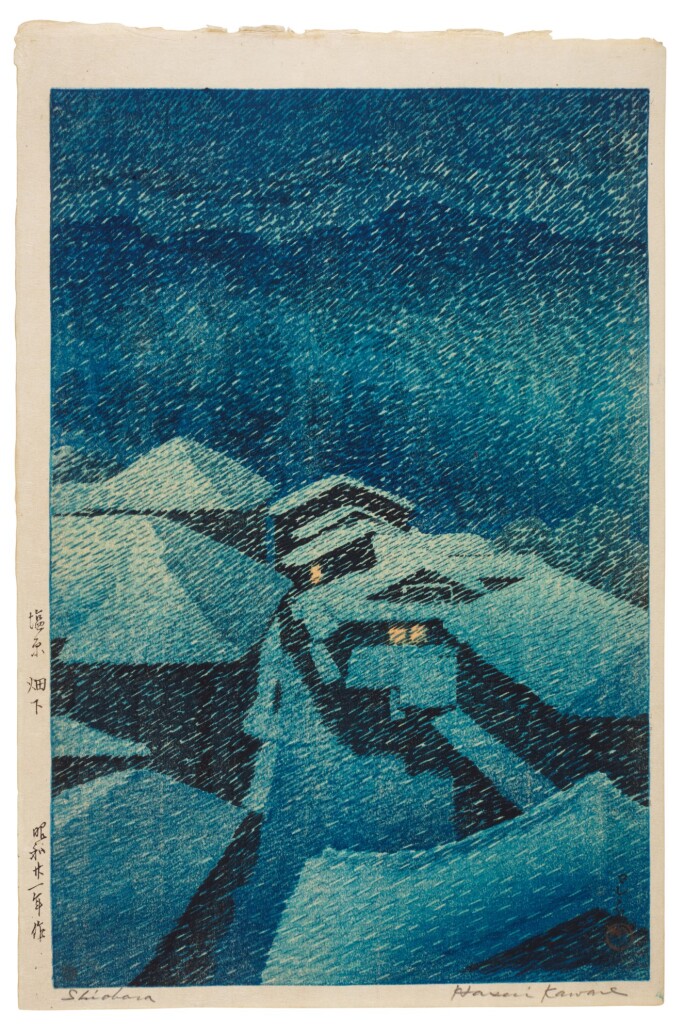 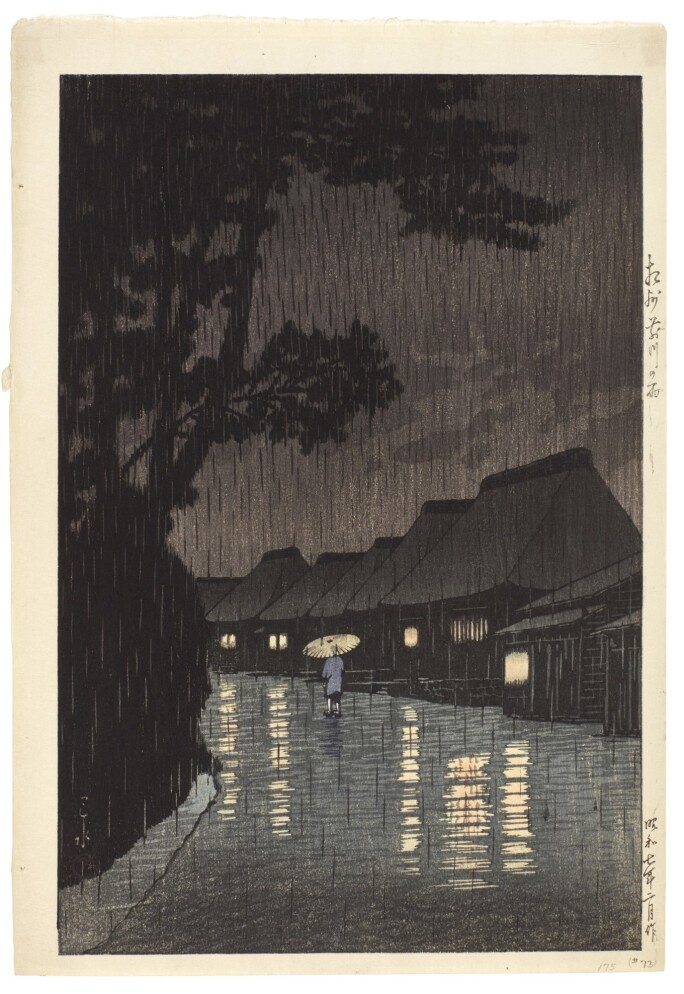 Japanese art is often described as having a profound sense of seasonality. This notion holds true with the winter season frequently celebrated in woodblock print designs. The pleasing contrast of the pure white of the snow coupled with the Prussian blue pigment of sea or skies, clearly provided artists with an array of opportunities to create visually striking compositions. Blanketed in great stretches of snow, the popular landscape theme of depicting meisho [lit. famous places] in winter is referred to in Japanese as yukigeshiki [lit. snowscapes], and is arguably a sought-after genre in its own right. 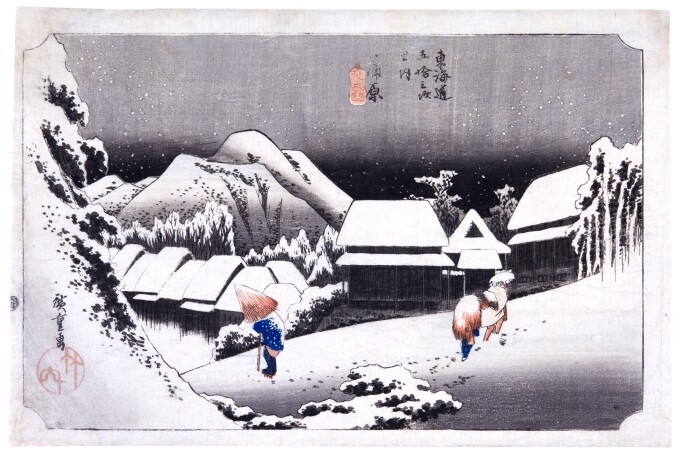 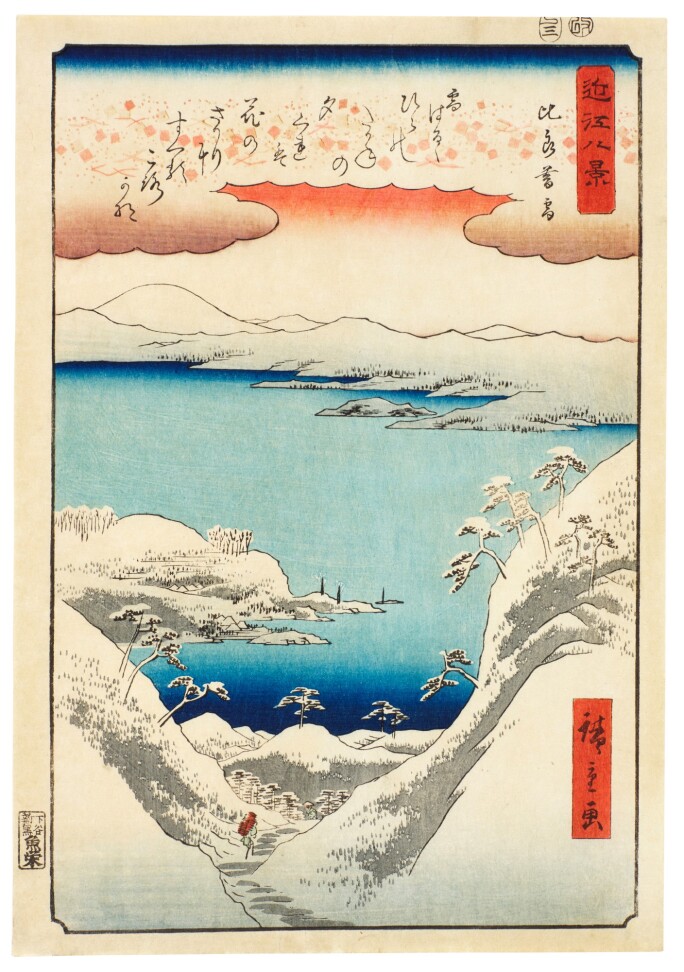 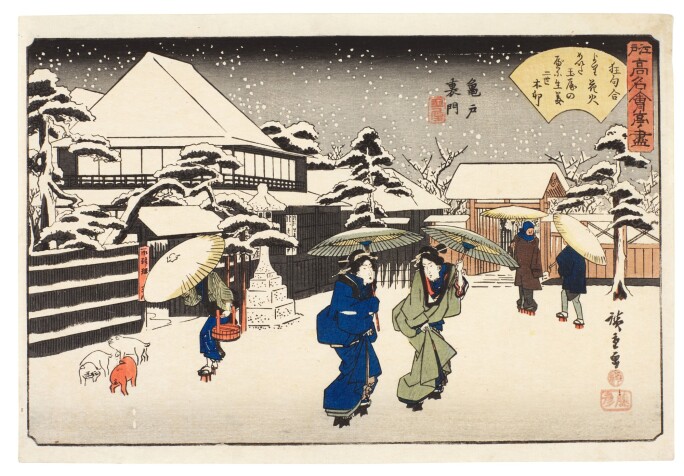 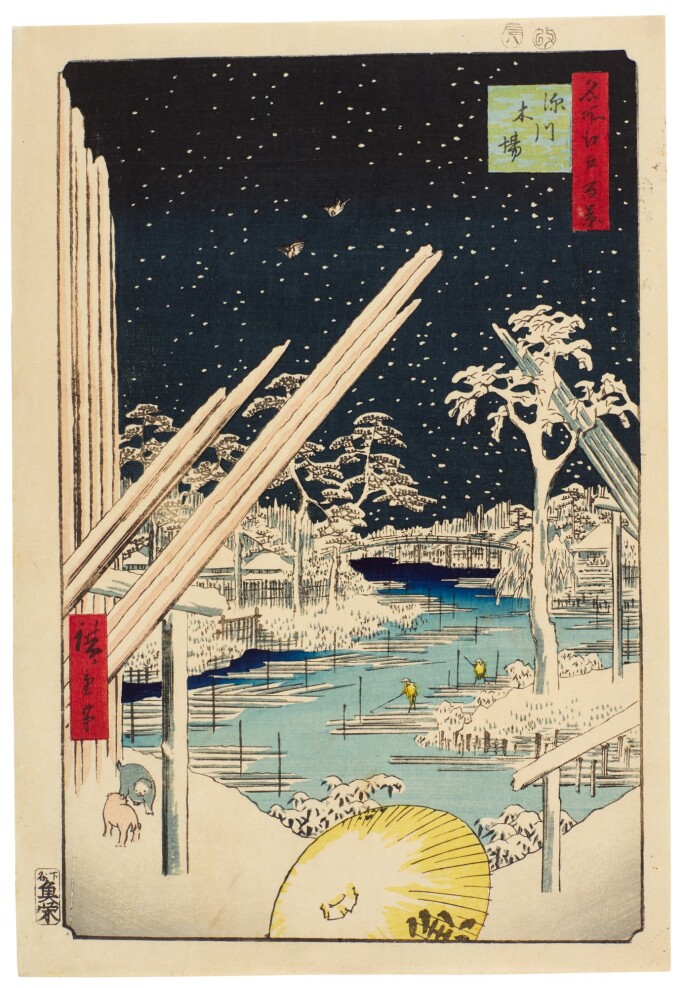 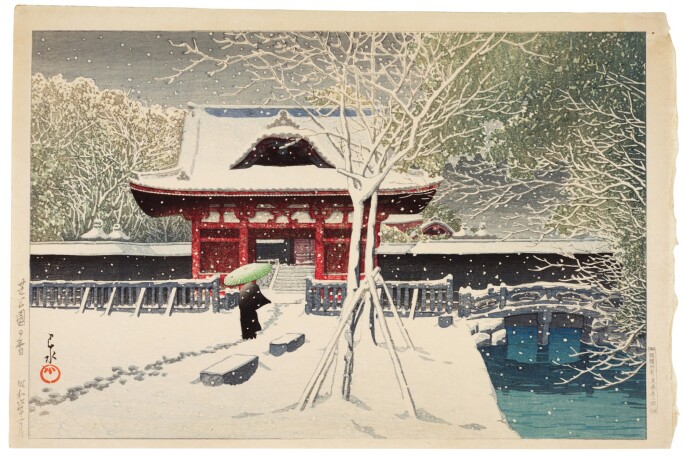 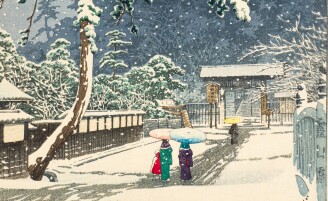