S otheby’s is proud to present Gamers Only – a selection of 13 fine examples of game worn sneakers from some of the NBA's greatest athletes.

Some of the highest-quality basketball sneakers in history have come from top players’ signature lines. For the most part, it was Converse’s “Chuck Taylor” that dominated the sneaker game until adidas arrived on the basketball sneaker scene. In 1969, adidas re-developed the 1964-1965 ‘Supergrip’ which included the first iteration of the iconic ‘Shell Toe’. Now known as the ‘Superstar’, adidas hoped to dominate the market with the help of a player-exclusive deal with Kareem Abdul-Jabbar, who was arguably the biggest name in the NBA at the time.

Known for his iconic ‘Sky Hook’ shot, Abdul-Jabbar put the ‘Superstar’ on the map when he donned the shoe during a high point of his basketball career in the 1970–1971 season. Within the first few years of its introduction, it is reported that the Superstar was worn by over 75% of all NBA players. The pair on offer at Sotheby’s is game worn and dual signed and worn during Abdul-Jabbar’s 1979-1980 season with the Los Angeles Lakers, which ended with the NBA title and Abdul-Jabbar’s sixth MVP win. The Lakers-inspired colorway is evident in the white leather uppers, suede toeboxes, and rubber ‘Shell Toe’ caps with purple and gold accents. This shoe-player relationship was later immortalized in a highly recognizable 1981 ad, in which Kareem Abdul-Jabbar shouts out his size-16 Superstars for assisting his trademark high-flying shot. adidas’ innovative design with Kareem Abdul-Jabbar as the face of the shoe made a serious impression among fans, players, and certainly with their competitors.

By the mid-80s’, the ‘Superstar’ was ingrained in popular culture, propelling adidas’ dominance as the top producer of high performance basketball shoes. The partnership between the company and Kareem Abdul-Jabbar became the model for younger players coming up in the system.

When Michael Jordan left the University of North Carolina in 1984, it is now no secret MJ wanted to sign a deal with adidas. Jordan believed adidas offered him the best opportunity to make money and maintain control of his brand. Nike was able to win over the young star with the biggest deal ever to be presented to an athlete by a Sportswear company.

The original Air Jordan sneakers were produced exclusively for Michael Jordan in late 1984. Designed by Peter Moore, the name “Air Jordan” was coined by Jordan’s agent David Falk, since the Nike shoes had air in the soles, and Michael Jordan played basketball in the air. In his first season with the Chicago Bulls, Jordan emerged as the most exciting player in the NBA. Jordan was putting up points against some of the greatest players of all time, including Larry Bird. By the end of his first season, Jordan averaged 28.2 points per game on 51.5% shooting and helped make a team that had won 35% of their games in the previous three seasons playoff contenders. Jordan’s achievements on the court undoubtedly provided the foundation for Nike’s success with the Air Jordan 1.

When the shoes finally released to the public in 1985, they flew off the shelves. Like Mike himself, the Air Jordan 1 was an instant hit among the public. In the first year of release, it is reported that Nike sold between three and four million pairs of the shoe. From the inception, Air Jordans have always been the pinnacle of sneakers, unmatched in their quality, craftsmanship, innovation, performance, and style. The sneakers not only changed basketball footwear forever but are also considered foundational to the development of sneaker culture. 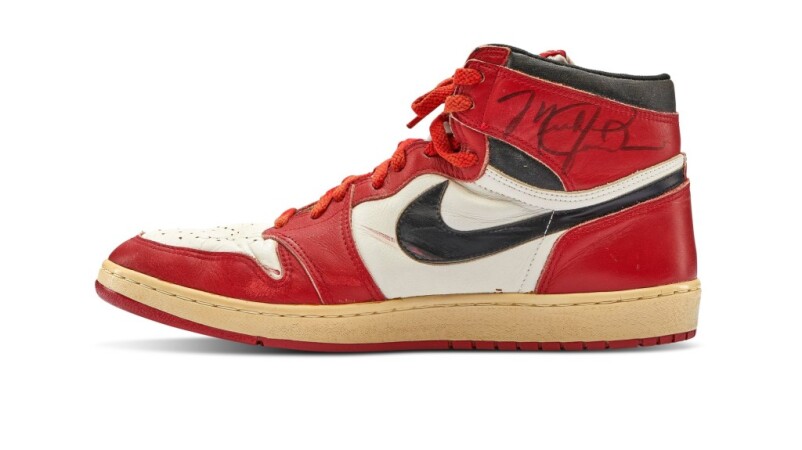 The One | MJ’s Air Jordan 1s
VIEW PAST AUCTION

Produced between January to February 1985, the pair on offer in this auction features the classic ‘Chicago’ colorway with red leather uppers, white leather quarters, black accents throughout including the signature black leather Swoosh and classic wing logo at the collar. The shoe is completed with a white rubber midsole and red rubber outsole. Michael Jordan wore Air Jordan 1s in 1984 and 1985, as well as modified versions in 1986 (after a broken foot Michael endured).

Curry’s first ever signature shoe bearing his name released in Summer 2015, quickly followed by the Autumn 2015 release of the Curry 2. Sotheby’s is proud to offer Curry’s custom-made Under Armour Stephen Curry Game Worn Dual Signed ‘Curry 2’s done in the Golden State warrior colors with bright yellow uppers, bright cobalt blue tongues, logos, and panels with lightning graphics. Curry’s autograph features twice at the toebox, initialed ‘WSC’ at the outside toe of the right shoe and inscribed at both sides of the left shoe with two of Curry’s favorite biblical references.

Curry used this pair during his championship 2015-16 season when he claimed the Unanimous MVP win. In total Curry scored 119 points, racked up 39 assists, 24 rebounds, 8 steals and 2 blocks in these sneakers. The Warriors won a record-setting 73 games, the best regular-season record in the history of the NBA.

These specific game worn shoes have been photomatched by Resolution Photomatching, who completed side-by-side comparisons of the present lot with photos of Steph Curry wearing the sneakers during four 2016 games: January 5 at Lakers, January 8 at Blazers, January 9 at Kings, and January 13 at Nuggets.

Discover the rest of our selection of game worn sneakers, featured exclusively at Sotheby’s. 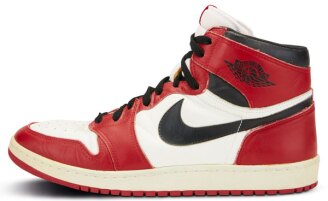