C hanel: Handbags and Accessories is a curated sale featuring some of the finest examples of fashion from one of the most coveted brands in the world, Chanel. Sotheby’s asked fashion journalist, author and critic Alexander Fury to break down the French house’s inimitable codes. From handbags to jewellery, discover iconic pieces of superb quality.

"Fashion is not something that exists in dresses only. Fashion is in the sky, in the street, fashion has to do with ideas, the way we live, what is happening. "

Gabrielle Chanel was revolutionary in her approach to jewellery. Previous seen as gauche and cheap, Chanel invented the idea of costume jewellery as fashionable so that, as she put it, “women can wear fortunes that cost nothing”. Chanel’s own collection of precious jewellery, given to her by lovers including the Russian Grand Duke Dmitri and the Duke of Westminster, was the inspiration for her fakes: ropes of imitation pearls and, later, Byzantine-inspired pieces with poured glass gems created by the atelier of Gripoix in the 1930s, and later by the young jeweller Robert Goossens.

Chanel herself wore the jewellery as she wanted her clients to: jangling together precious gemstones with costume glass, reality with fantasies. In January 1983, when Karl Lagerfeld presented his first haute couture collection under the Chanel label, he paid homage to this style with a postmodern twist: Lagerfeld turned to the house of Lesage to create embroideries of Chanel jewellery on a long black dress: fake jewels, made fake again. It proved emblematic of the humour and panache with which Lagerfeld would ceaselessly reinvent Chanel’s style for 36 years.

Inspired by the Verdura Cuff

Many key elements of Chanel style are born directly from the personal tastes – and wardrobe – of Gabrielle Chanel. In 1930, she commissioned the aristocratic jeweller Duke Fulco di Verdura to create enamelled cuffs, decorated with symmetrical geometric designs of mismatching gemstones. A hybrid of precious jewels and the “junk” costume jewellery she had made fashionable, the first cuffs were made with jewels from Chanel’s own pieces, which she asked Verdura to redesign.

They were enamelled in white, while their Maltese cross design was a motif taken from the duke’s childhood in Sicily – not far from the Amalfi coast and Malta. They also visited museums and examined Renaissance pieces, which influenced her jewellery designs fundamentally from this period on.

An essential part of the ‘uniform’ Chanel began to create for her women – and, most of all, herself – in the 1950s was the 2.55 bag. With a typically Chanel numerical nomenclature, indicating the months and year in which it was first shown (February 1955, her third collection since her comeback), the 2.55 has its roots in the 20s and 30s, when Chanel began to create shoulder bags after finding the period’s ‘clutch’ styles inconvenient and impractical. Taking inspiration from soldier’s knapsacks, toted on the shoulder and leaving the hands free to, as Chanel herself said, “get on with things”, the 2.55 was an instant success.

The model was executed in quilting, reminiscent of Chanel’s suits, and had adjustable chain straps. The interior was frequently burgundy, a colour many said was chosen because of the uniforms of the Aubazine orphanage where Chanel was raised. Practically, it also made it easier for a woman to find her belongings inside. 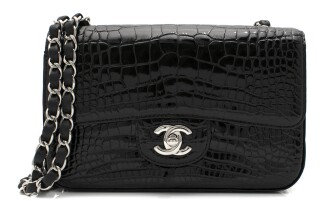 Classic Archives and Modern Reinvention: The Timeless Appeal of Chanel

Chanel used multiple flowers during her career – her dress of the 1930s, which seem uncharacteristically romantic, ruffled and feminine to eyes accustomed to the later ‘look’ of Chanel’s comeback years, often features corsages of fabric flowers as decoration. But the camellia would become the flower most associated with the fashion house – its meaning, tied up with female sexuality as explored in Alexandre Dumas fils’ novel La Dame aux Camélias, underscored the libertine stream behind many of Chanel’s innovations. When reviving Chanel in the 1980s, Karl Lagerfeld seized on the camellia as a house code to be explored – here, the flowers used to trim the sleeve of a lace gown. Polite, compared to the 1993 collection where camellias were perched on the pubis of Chanel-branded Y-fronts.

Alexander Fury is a fashion journalist, author and critic. He is the Fashion Features Director of AnOther magazine, and the Men's Critic of the Financial Times newspaper. In 2016, he was made the first Chief Fashion Correspondent at T: The New York Times Style Magazine, a position he held until 2018.

Prior to this, from 2013 to 2016 Fury was fashion editor of the Independent, i and the Independent on Sunday newspapers. He was the inaugural Men's Critic for American Vogue.com, covering the Winter 2016 and Spring 2017 menswear seasons. Fury was the first journalist to receive the Editorial Intelligence Award for Fashion Commentator of the Year 2014-15, and is a member of the Business of Fashion's BoF 500. In 2018, Fury received the Honorary Doctorate of Humane Letters from the Academy of Art University, San Francisco. In the same year, he was asked to select the 'Dress of the Year' at the Fashion Museum, Bath.

His latest book, Chanel: The Impossible Collection, was published by Assouline in 2019. 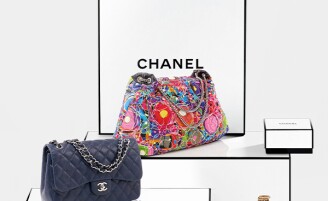