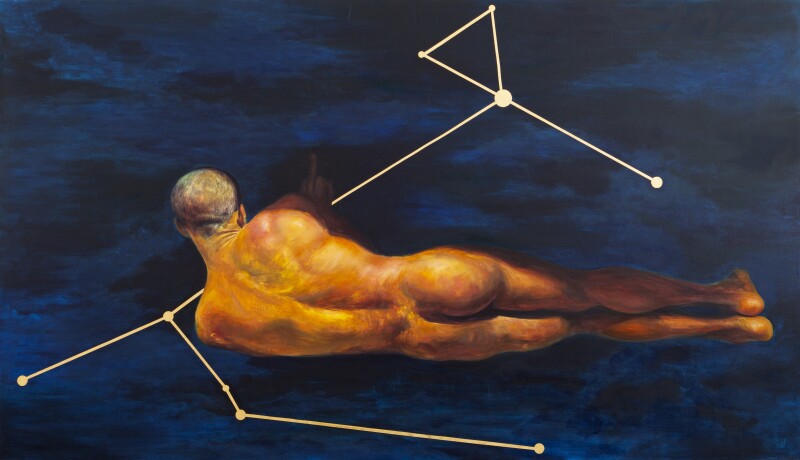 Oil and gold leaf on canvas

Mario Moore (b. 1987) lives and works in Detroit, MI. Moore received a BFA in Illustration from the College for Creative Studies (2009) and an MFA in Painting from the Yale School of Art (2013). He was recently awarded the prestigious Princeton Hodder Fellowship at Princeton University and has participated as an artist-in-residence at Knox College, Fountainhead residency and the Josef and Anni Albers Foundation.

Moore's work has afforded him many opportunities—from multiple exhibitions and featured articles, including The New York Times. His work is in several public and private collections which include the Detroit Institute of Art, The Studio Museum in Harlem and Princeton University Art Museum. He employs the Black body in paintings to show power and resilience through the denial of the Colonial gaze. He redefines the gaze for the subjects he paints, allowing them to look directly out in an unflinching stare. The historical references within the work draw parallels to the social, economic and racial occurrences of today.

Moore uses people close to him as models to represent the many facets of humanity and particular issues that directly affect him and his community. Particularly, the unjust killing of Black men and women by law enforcement. He tackles the stigma of stereotypes often assigned to Blacks. For example, the "angry Black man" or "angry Black woman" painting figures that exist as multidimensional, unapologetically flawed human beings with the range of feelings they are liberated to have.

Mario Moore was recently featured in an episode of PBS news hour’s arts and culture series, Canvas. Moore spoke with reporter Jeffrey Brown about his rethinking about who deserves a place in the portraiture.

Moore’s painting, Siriusly, features the constellation Canis Major and the Sirius star. The work is about the constellation and the knowledge that was bestowed to man as referenced by the Dogon Tribe. It is at once about human knowledge and also those things that we don't know. The Black male body represents the beginning of man and also a body that occupies the space that ignores the viewer, with only his interior concerns.