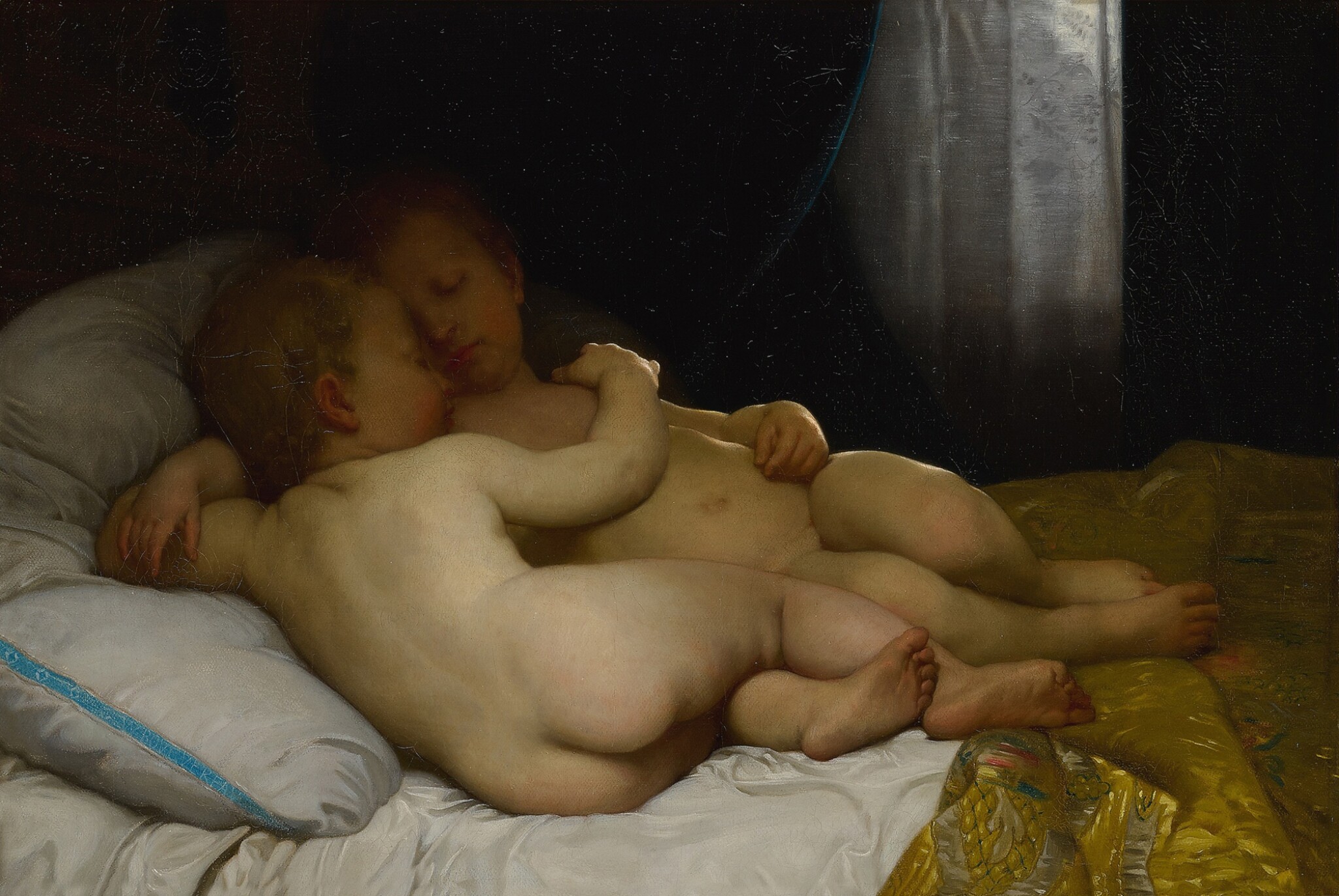 By 1868, the 43-year-old Bouguereau was fully immersed in a major project for the Bordeaux Grand Théâtre, for which he had been commissioned in 1865 with the decoration of the concert hall. The contract for this commission followed the death of Jean-Marie Durand-Ruel, Bouguereau’s dealer and principal champion. Durand-Ruel’s son, Paul, who took over his father’s business was strictly interested in the young Impressionists and soon liquidated the gallery’s stock of academic canvases. In financial distress, Bouguereau set out to find a new gallery to represent him and in 1866 he closed an exclusive contract with Adolphe Goupil and his partner Leon Boussod. A well-established firm, Goupil & Cie. offered Bouguereau financial stability and access to an international clientele. In return, the company demanded exclusive rights to all of the artist’s production, including reproduction rights for all of the works. Goupil’s main business consisted in printing and marketing art reproductions, which was extremely profitable for the company.

While working on the Bordeaux commission, Bouguereau also needed to produce a number of easel pictures in order to fulfil his contract with Goupil and to exhibit at the Salon. The two pictures sent to the 1868 Salon were Enfants endormis and Pastorale. Both were met with universal praise from critics and public alike. The art critic Théophile Gautier was particularly effusive in his praise of Enfants endormis:

It is difficult for a woman to imagine children more attractive than her own, yet we believe that M. Bouguereau’s ‘Enfants endormis’ would fulfill or even surpass the dream of any mother, however biased she might be in favor of her own offspring. The twins emerging from Leda’s egg, or Paul and Virginie in their cradles were not more charming…The group is elegantly composed and beautifully arranged, as art too often forgotten today. Nothing could be more tender or delicate than the brush with which the artist caressed these delightful infants (Vendryès, op. cit. p. 36).

The subject of sleeping children may have been inspired by his wife’s pregnancy with their fourth child. It is also true that his former dealer, Durand-Ruel, was instrumental in steering Bouguereau away from more somber, religious images, toward lighter subjects, such as women and children, which held greater public appeal. Bouguereau’s love for children is evident in Enfants endormis and in his entire oeuvre that abounds with depictions of cherubic, idealized children. He approached the theme of the sleeping twin children in Charity of 1859, which reflects his emulation of Ingres’ exquisite draftsmanship. The critic Marius Vachon observed of his use of line ”with what delicacy, with what clarity, does it envelop the flesh, it writes its curves, strong, fine and graceful!” (Vachon, 1900, op. cit, p. 140).

Bouguereau was known to invite models with their small children to his studio. He was particularly indulgent of their antics and he let them play on the floor while he sketched them in different postures, studying every fold of flesh and gesture.

As agreed with Goupil & Co., Bouguereau produced two reductions of Enfants endormis that were sold to Wallis of London. The present work is the larger reductions of the two that he executed. An engraving by Victor Thirion was produced and sold by Goupil in 1869 with the title Les jumeaux.