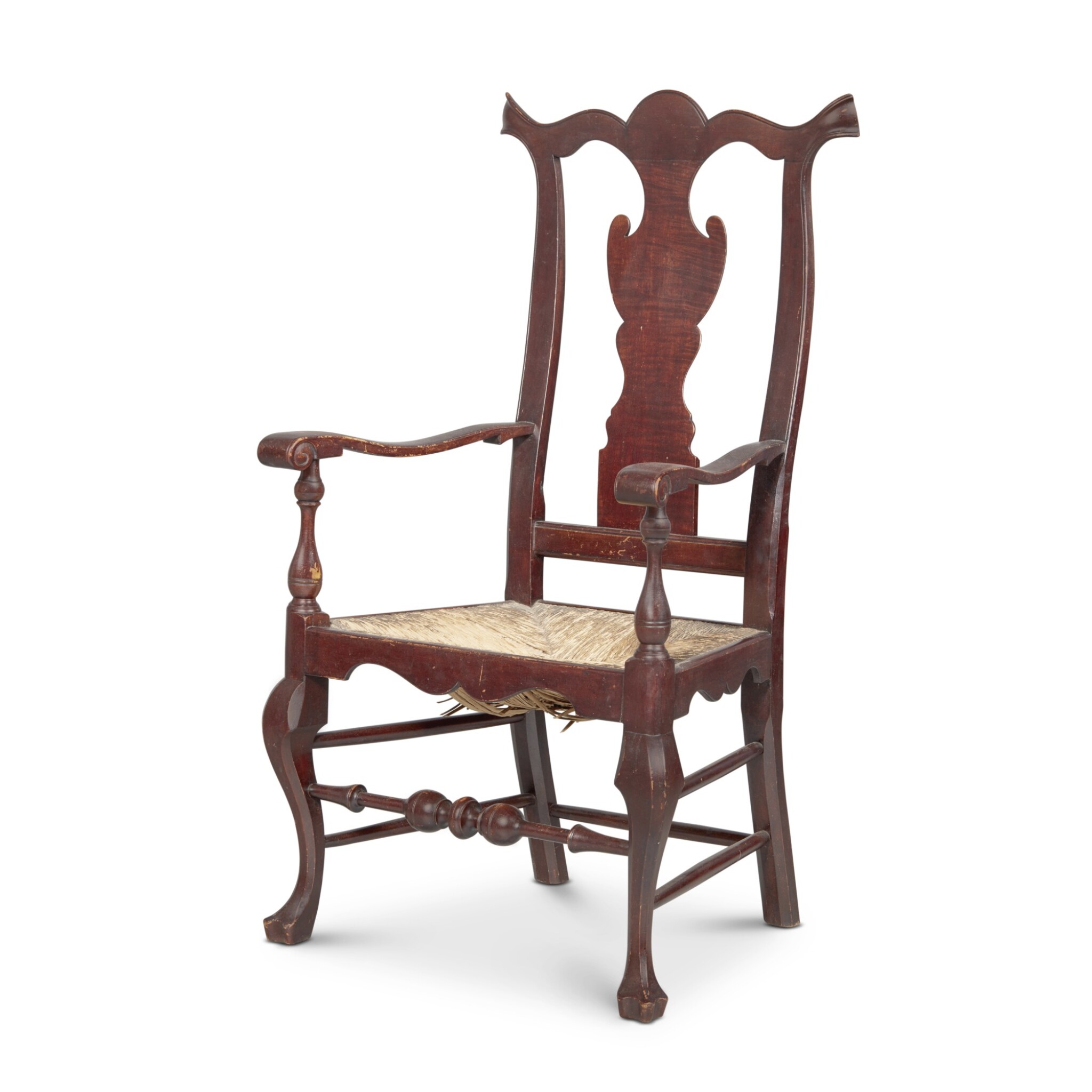 Made of exceptionally figured maple, this armchair is identical to an armchair attributed to Solomon Fussell (c. 1704-1762) or William Savery (1721-1787) that sold in these rooms, Property from the Collection of E. Newbold and Margaret du Pont Smith, January 21, 2017, sale 9608, lot 6011. Both chairs likely stem from the same set and follow the pattern of chairs made by Fussell and Savery with a wavy crest, “spoon back,” turned arm supports, rush bottom seat, tripartite stretcher, and “crook’d feet.”1 Savery is recorded as having some eighty-three examples of this type of chair in stock at one time.2 Fussell’s surviving business ledgers from 1738 to 1751 indicate that such “common” chairs were produced in large quantities with their basic components stockpiled before 1750. Chairs of this pattern are the focus of Benno Forman’s article, “Delaware Valley ‘Crookt Foot’ and Slat-Back Chairs: The Fussell-Savery Connection,” Winterthur Portfolio 15 (Spring 1980): p. 55.

William Savery was apprenticed to Solomon Fussell, a chairmaker who worked in Philadelphia from circa 1735 to 1741. By 1750, Savery had established a shop of his own on Second Street, between Chestnut and Market, where he worked for the remainder of his life. An active Quaker, his patrons included many other Quakers including the Pembertons, Drinkers and Abel and Rebecca James. In 1754, he was appointed a ward assessor by Benjamin Franklin, who purchased furniture from Savery and Fussell in the 1740s.3 Savery’s estate inventory taken at his death in 1787 reveals that his important furniture was made of maple, such as six maple chairs and one armchair valued at 4 pounds, a maple chest of drawers valued at 5 pounds, and a maple dressing table valued at 1 pound 1 shilling.4 Most of Savery and Fussell’s accounts list maple as the primary raw material. It was likely their wood of choice since it was plentiful in the Philadelphia area and, though difficult to work, allowed the craftsmen a high quality end product with a vibrant and strong surface. Although both makers used similar construction methods in their work, their chair styles differed at times. This chair follows the design preferred by Fussell, with a crest with a central arch, a vase shaped splat with scrolled ears, undercut arms and a tripartite stretcher. Savery’s chairs exhibit a serpentine crest rail, vase-shaped splats with shield-like profiles, serpentine arms and bulbous front stretchers.