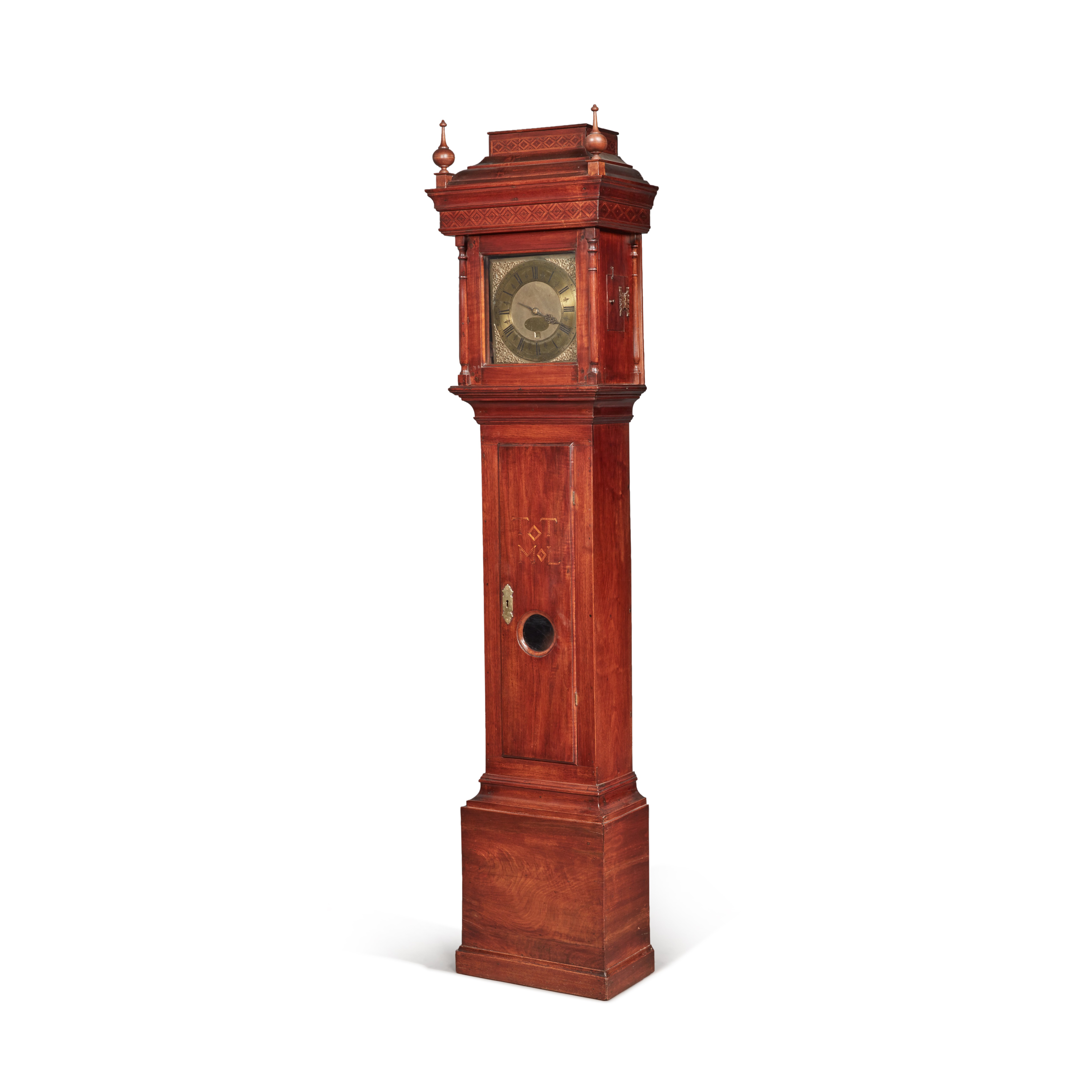 Displaying the checkered initials “TT / ML” inlaid on the door, this clock case was made by Thomas Thomas (1687-1774) of Radnor Township, Chester County for his daughter, Margaret (1712-1789), on the occasion of her marriage to Nathan Lewis (1705-1788) at the Radnor Friends Meeting on July 1, 1731. Nathan was the son of William Lewis II (1679-1731) and his wife Lowrey Gwen Jones (1682-1735) of Chester County. This clock stood in Nathan and Margaret’s house in Goshen Township, which had been built by his grandfather, William Lewis (1636-1708), inherited by his father, William Jr., and later left to Nathan. In 1777, this house was used by Major John Clark during the Revolutionary War as a surveillance outpost from which he sent important dispatches to General Washington.1 This clock likely corresponds to the clock itemized with a tea table and valued at 3 pounds in Nathan’s 1788 estate inventory. It was later owned by Mrs. Roger Williams of Merion, Pennsylvania, who typed and attached the note recounting its history inside the door of the case. It was owned by Israel Sack, Inc. and sold in 1970 to Irvin and Anita Schorsch, Jr. before being sold as part of their collection in these rooms in 2016.

Thomas Thomas’s family had emigrated from Wales in 1686 and settled in Radnor, where he was born in 1690, before the family relocated to Newtown Township. In 1708, he married Tamar Miles (1687-1770) in Radnor Township. He is listed in Radnor Township tax records as a joiner. The estate inventory taken at his death includes “Carpenter and Turning Tools.” His use of checkered inlay for the initials on this clock is distinctive and may have been inspired by inlay found in Welsh furniture.2 The initials are separated by an inlaid diamond motif with a dot in the center that is repeated in the elaborate inlay treatment of the cornice and sarcophagus top.

A bible box attributed to Thomas Thomas is also in the du Pont Collection and part of this sale. Two other pieces of furniture with closely related inlay are attributed to Thomas Thomas. These include a chest of drawers and a box with the initials “S S” and date “1737”.3 Both pieces may have been originally owned by Sarah Smedley (1717-1801), daughter of Thomas and Sarah Baker Smedley (d. 1765), who married John Minshall at the Goshen Meeting in 1739/40. The box likely sat on top of the chest as they descended through successive generations of her family until a relative sold them to Howard Reifsnyder in the late nineteenth or early twentieth century.

The signature plate of this clock is inscribed by John Wood Sr. (d. 1760/61), the prominent Philadelphia clockmaker. He advertised his business in the Pennsylvania Gazette as early as 1734 and continued to operate his establishment at the corner of Front and Chestnut streets, in a shop that belonged to Peter Stretch, until his death in 1761. He left his son John Wood, Jr. (1736-1793) “All the Tools belonging to my Trade” as well has his business. John Jr. continued working at that location until 1777.