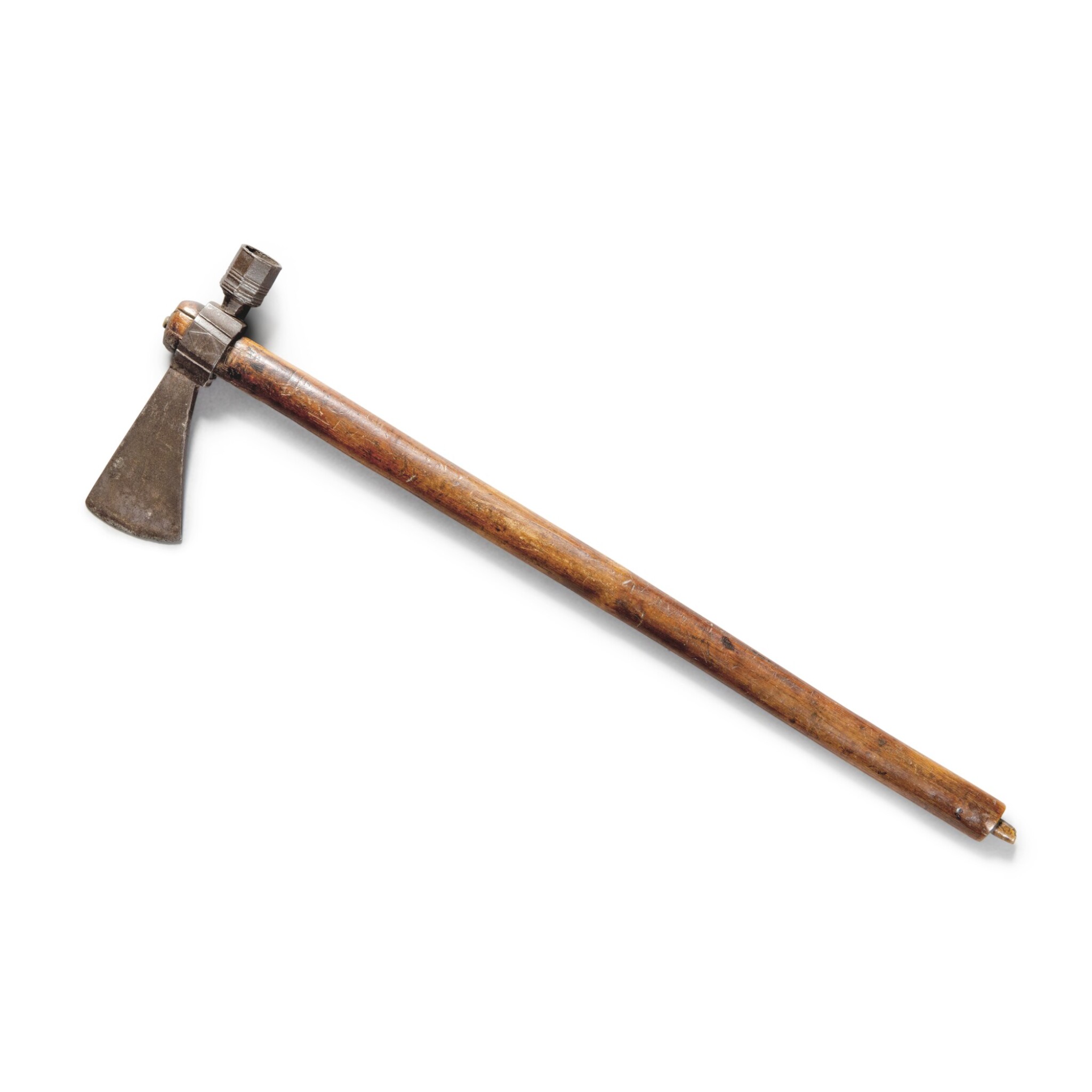 The blade engraved I / FRASER

In overall fine condition. This is the only John Fraser tomahawk retaining its original haft and axe head to enter the marketplace, and it exhibits a beautifully aged dark patina. The axe head is loose due to a small shrinkage crack on the head of the haft. There is a minor old chip to the mouthpiece and minor nicks to the blade.

John Fraser immigrated to the new world from Scotland in 1735 and established his first trading house in the village of Venango in western Pennsylvania, adjacent to the Seneca village. He was licensed by the British to trade with the Native Americans and did extensive gunsmithing for the Seneca, often exchanging his work for furs and pelts. By 1748, Fraser had developed a strong relationship of mutual respect with the Native American tribes as well as with the Crown as a trader, but his station in life was challenged the following year when the French tried to regain a stronghold of the Ohio River Valley. On numerous occasions, Fraser had been forced to flee his trading house in Venango and had lost all of his trade goods. By the summer of 1753, he had moved and established a new trading house at the mouth of Turtle Creek on the Monongahela (within Allegheny County, Pennsylvania), where he would meet George Washington later that fall. Washington was commissioned by the Governor of Virginia to confront the French and demand that they leave their forts in the Ohio Country and with Christopher Gist in frigid weather upriver. After a terrible night where the two were stranded on an island due to ice forming on the river, they were able to make it to Fraser’s warm cabin by morning, which started their friendship. Fraser was with Washington at Fort Necessity, Braddock’s Defeat, and Forbes’s campaign against Duquesne.

Although a prolific gunsmith, there are no known rifles signed by John Fraser. The only material object that bears his mark is this pipe tomahawk, signed “I. Fraser,” making it truly one of a kind. Various accounts given by Fraser of his captured trade goods include pipe tomahawks, and similar tomahawk heads, with their distinctive pipe bowl and diamond filed patterns, have been found in different locations in North America, though missing their original hafts. Many believe that this tomahawk was not only made by John Fraser but also owned as his own personal weapon. The subject has a head with an octagonal pipe bowl with a threaded base so it can be removed for use, and the mouthpiece on the haft is simply carved into the ash wood. This beautifully designed, forged, and crafted eighteenth century pipe tomahawk allowed John Fraser, a modest yet determined frontiersman, to survive and accomplish great things. It exists today as a rare artifact of the French and Indian War. For more information on this tomahawk and on the smith, John Fraser, please see John Kolar’s article, “John Fraser: Frontiersman, Gunsmith, and Trader” in the November 2013 issue of Muzzle Blasts magazine.