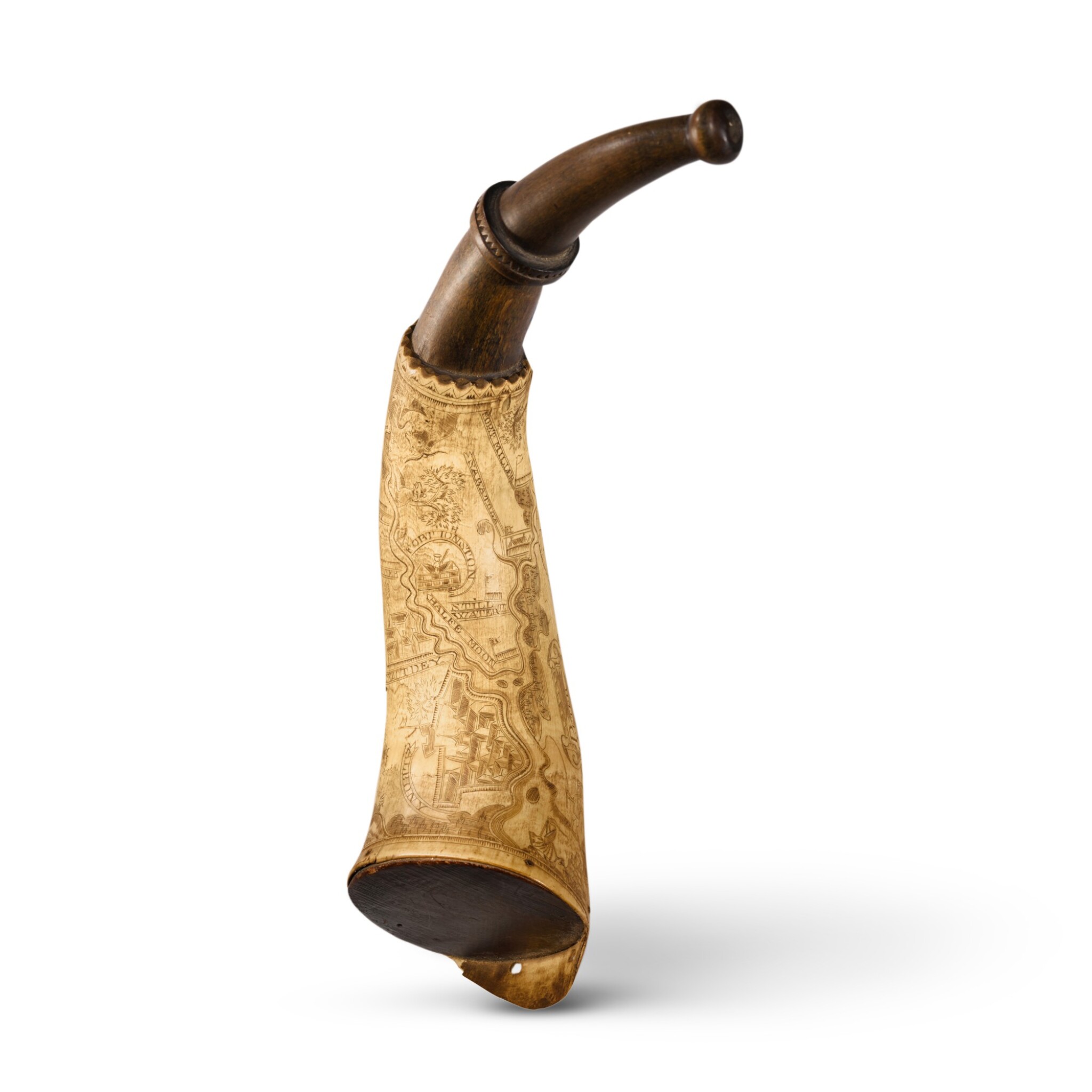 In overall very fine condition. 3/4 inch splinter below the royal coat of arms but no loss. Lacking stopper. Negligible chip to the rim near the butt cap

The eighteenth century yielded many folk art powder horns and map powder horns, but rarely a combination of the two genres in one. This well-primed, ivory-colored horn, is engraved with the names of several New York townships and forts, intermixed with charming everyday scenes including a man finishing, ships rolling into the harbor, a man shooting ducks overhead, and animals such as oxen and lions in a masterful composition featuring both vertical and horizontal orientations. This unification of place and culture culminates in a utopic vision of New York; its own Peaceable Kingdom. The artist of this horn furthermore chose not to waste a bit of space, with even the lobe, an element that is often lost and broken for a horn of this age, engraved with an ox and the township of Staten Island, squeezed under the City of New York, which wraps around the base. The diversity of the artist’s incisions, from deep cross-hatching to fluid free-hand curves and shading striations create visual depth and wonderful patterned designs. Exquisite beyond its engraved area, with a finely carved engrailed edge and raised ring; this is a horn that takes extended time to visually consume.

While it is not uncommon for pre-Revolutionary War horns to feature the Royal Coat of Arms of George the Second, it is perhaps more interestingly relevant given the possible owner for whom this horn was made. No records were found of a Peter Bachop from New York before the Revolutionary War, but there was one found after. Captain Peter Bachop was Loyalist who commanded the East Florida privateer sloop “Governor Tonyn’s Revenge” in 1778. Governor Patrick Tonyn issued a proclamation making East Florida a sanctuary for loyalists in 1774, which successfully attracted a large population of new settlers, particularly from southern states. Within the following year, there were multiple successful raids of Tory ships made by rebel forces and George Washington, seeing that more gunpowder and ordnance could be taken from these ships to aid the rebel cause, decided to order an attack on East Florida.

An article published in the Pennsylvania Packet details that on the morning of June 19, 1778, the Connecticut slate ship, Defence, commanded by Samuel Smedley, and the sloop Volant, commanded by Captain Osborne took two privateer sloops fitted out from St. Augustine: The Govenor Tonyn’s Revenge, of 12 carriage guns and 72 men commanded by Captain Peter Bachop; and the Ranger of 8 guns and 35 men, were both brought into port the next day. The third privateer ship, the Active, would have likewise been captured, but the ship had taken advantage of the fog and disappeared into the dark night, as they were securing the prisoner’s on Bachop’s ship. Tory captains Bachop and Osborne were taken to South Carolina, but unlike Osborne, who was treated like a common prisoner, Bachop was given preferential treatment due to his previous compassion towards rebel prisoners. Bachop likely died shortly thereafter due to illness, although there are no accounts of his life after his last imprisonment. For additional information on Peter Bachop and the rebel raids of East Florida, see Richard D. Pougher, “Averse…to Remaining Idle Spectators: the Emergence of Loyalist Privateering During the American Revolution, 1775-1778 Volume II. Chapter 9 to Conclusion,” (2002), Electronic Theses and Dissertations, 208.