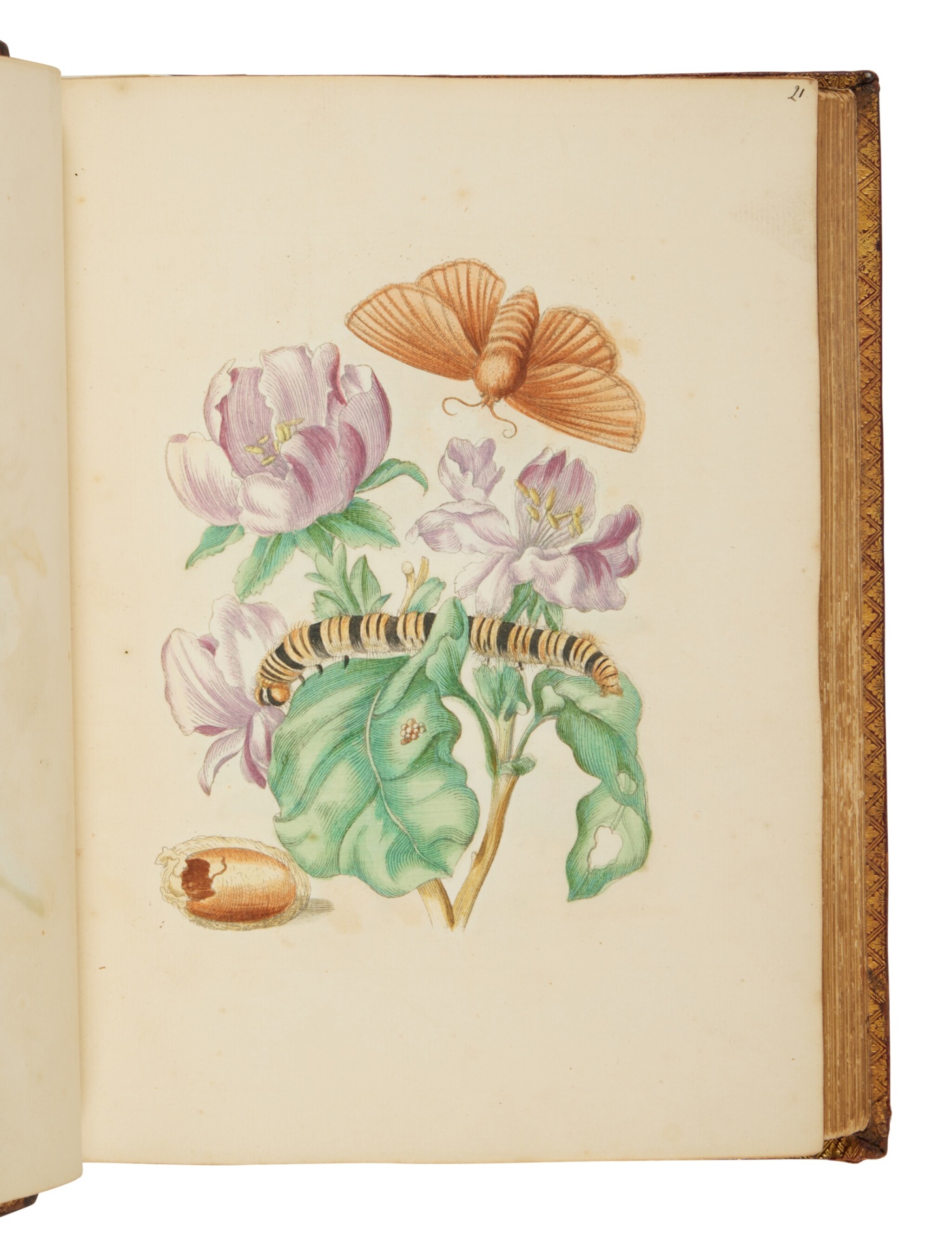 3 parts in one volume, 4to (233 x 175mm). Engraved allegorical frontispiece by Simon Schijnvoet, author portrait in counterproof, 3 engraved part-titles with foliate around text, 150 counterproof plates, all delicately handcolored, likely by Merian's daughters, the frontispiece and portrait with watercolor heightened with gilt; some browning and spotting to text leaves, more pervasive in Part III, dampstain to A3 (Part I), light mildew to portrait and 5 text leaves in Part I, offsetting and occasional spotting or staining in plates, more pervasive in about 5. Contemporary Dutch red morocco paneled in gilt, spine with raised bands in six compartments, black lettering-piece to second, overs elaborately gilt marbled endpapers, gilt edges; discreet repairs to spine.

"In modern terms, Maria Sibylla Merian may be best characterized as an amalgam of natural history illustrator, naturalist, and, to a certain extent, entrepreneur" (Huxley). Merian was the daughter of the well-known Swiss engraver and publisher Matthäus Merian. On her father’s early death, her Dutch mother married the flower painter Jacob Marrell. It was one of his pupils, Johann Graff of Nuremberg, who first taught Maria to paint, and later they married. Maria was primarily interested in entomology, and her first book, on the insects of Europe, with fine colored plates of insects and flowers, was published in 1679. Some years later she was shown a collection of tropical insects that had been brought back from Surinam. This inspired her, and together with her daughter Dorothea, she embarked on a remarkably enterprising journey to South America, arriving in September 1699. They stayed for nearly two years studying and recording the plants and insects.

The present copy of Der Rupsen Begin is one of the few known de luxe copies. The plates are not only colored by hand, but the coloring was almost certainly accomplished by Merian and her daughters. Additionally, the present copy is printed in counterproof. As Merian states in the introduction to the second part of this work, colored copies were available upon request. Copies with plates in counterproof would have commanded an even higher price still, as more effort was required to print these, as they were produced by running the sheets through the press not with an engraved plate, but with a freshly printed image, thus producing a lighter print without a plate mark. The delicate base this method achieved allowed for finer coloring, thereby replicating the original drawing more closely.

A rare example of a stunning work.