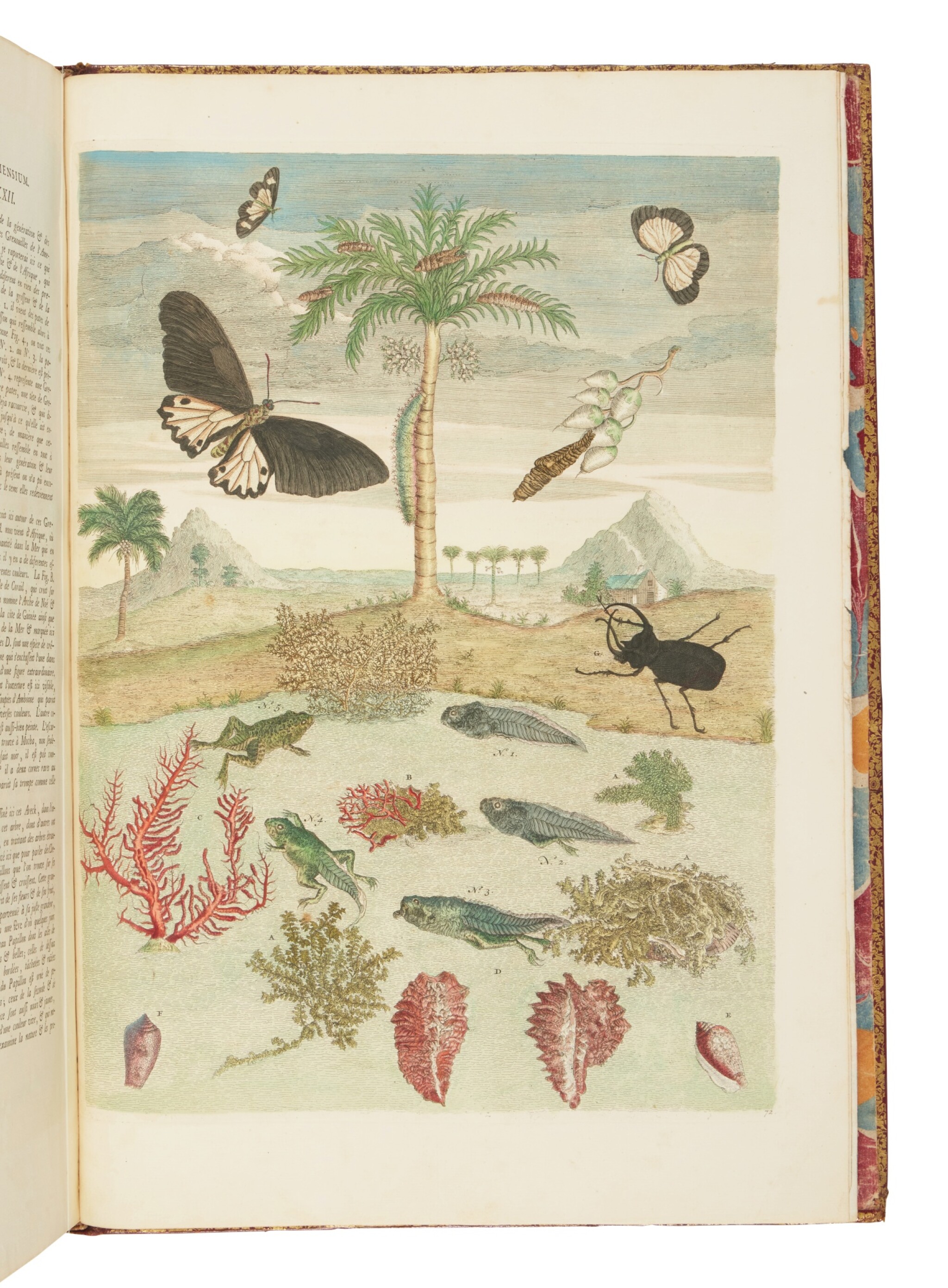 Folio (510 x 350mm). Text in French and Latin, title vignettes handcolored and heightened with gold, as is the dedication leaf. 72 engraved plates by J. Mulder, P. Sluyter and D. Stopendaal, all with contemporary full handcoloring and heightening in gold to some plates; plate 34 cut to just outside the image plate area and mounted to size at the time of binding, seven plates with minor smudging to the coloring, one plate with spotting, mostly marginal. Sumptuously bound in contemporary French red morocco gilt, sides with wide gilt foliate borders within double fillets and fleur-de-lys, center of covers with the arms of the Duke of Newcastle added later, with raised bands, citron morocco lettering-piece and a blue/green morocco label bearing the Newcastle crest, marbled endpapers, gilt edges; some minor rubbing to extremities and raised bands.

The magnificent Duke of Newcastle-Abbey Copy of Merian's classic study on tropical insects.

Maria Sybilla was the daughter of the well-known Swiss engraver and publisher Matthaus Merian. On her father's death, her Dutch mother married the flower painter Jacob Marrell. It was one of his pupils, Johann Graff of Nuremberg, who first taught Maria to paint, and they later married. Her chief interest was in entomology, and her first book on the insects of Europe, with fine colored plates of insects and flowers, was published in 1679. It was a work of careful scientific study as well as great artistic merit.

When the Dutch West Indies Company returned with tropical insect specimens, Maria decided to visit the Dutch colony of Surinam, along with her daughter Dorothea, to study and paint insect life there. Arriving in September 1699, they stayed for nearly two years studying and recording plants and insects. Her elder daughter Johanna travelled to Surinam to complete her mother's work. The latter died in 1717 before the final twelve plates were published, completing the edition of 1705 that was issued with 60 plates.

" ...her artistic groupings of the insects amidst the tropical flora makes this book one of the most beautiful and unusual in the whole range of natural history" (Landwehr, Studies in Dutch Books with Coloured Plates p.28). Peter Dance writes of the work, that it "was easily the most magnificent work on insects so far produced ... [combining] science and art in unequal proportions, meeting the demands of art at the expense, when necessary, of science. Her portrayals of living insects and other animals were imbued with a charm, a minuteness of observation and an artistic sensibility that had not previously been seen in a natural history book." He adds that if Gould and Audubon have "a spiritual ancestor, then it is difficult to think of a more worthy claimant to the title than Maria Sibylla Merian" (S. Peter Dance, The Art of Natural History pp. 50-51).