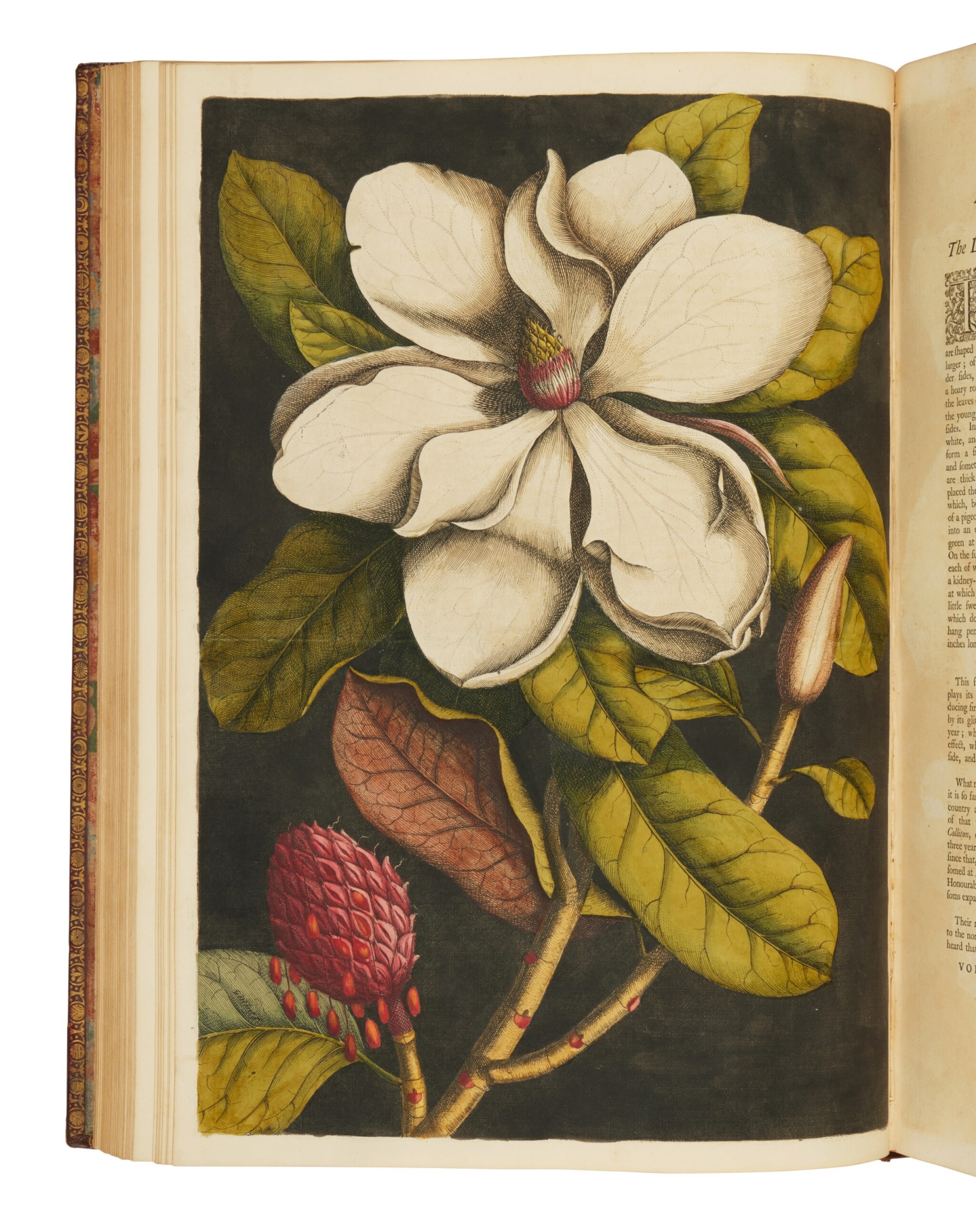 The Natural History of Carolina, Florida, and the Bahama Islands: containing the figures of birds, beasts, fishes, serpents, insects, and plants; particularly, those not hitherto described, or incorrectly figured by former authors, with their descriptions in English and French. London: Printed for Charles Marsh, Thomas Wilcox and Benjamin Stichall, 1754

The second edition of the "most famous colorplate book of American plant and animal life ... a fundamental and original work for the study of American species" (Hunt). A landmark work by the founder of American ornithology, this book embodies the most impressive record made during the colonial period of the natural history of an American colony, and is the most significant work of American natural history before Audubon.

Trained as a botanist, Catesby travelled to Virginia in 1712 and remained there for seven years, sending back to England collections of plants and seeds. With the encouragement of Sir Hans Sloane and others, Catesby returned to America in 1722 to seek materials for his Natural History. He travelled extensively in Carolina, Georgia, Florida, and the Bahamas, sending back further specimens. His preface provides a lengthy account of the development of this work, including his decision to study with Joseph Goupy in order to learn to etch his copper plates himself to ensure accuracy and economy. The end result is encyclopedic: Catesby provides information not only on the botany and ornithology of the area, but also on its history, climate, geology, and anthropology.

Catesby writes in the preface of his method of working: "As I was not bred a Painter, I hope some faults in Perspective, and other niceties, may be more readily excused: for I humbly conceive that Plants, and other Things done in a Flat, if an exact manner, may serve the Purpose of Natural History, better in some Measure, than in a mere bold and Painter-like Way. In designing the Plants, I always did them while fresh and just gathered: and the Animals, particularly the Birds, I painted while alive (except a very few) and gave them their Gestures peculiar to every kind of Birds, and where it could be admitted, I have adapted the Birds to those Plants on which they fed, or have any relation to. Fish, which do not retain their colours when out of their Element, I painted at different times, having a succession of them procured while the former lost their colours... Reptiles will live for many months...so that I had no difficulty in painting them while living" (Vol.I, p.vi).

The first edition was published in ten parts, with the final part appearing in 1743, plus the twenty plate appendix, which was issued four years later. Work appears to have begun on the present second edition almost immediately, if not simultaneously with the publication of the appendix in 1747.