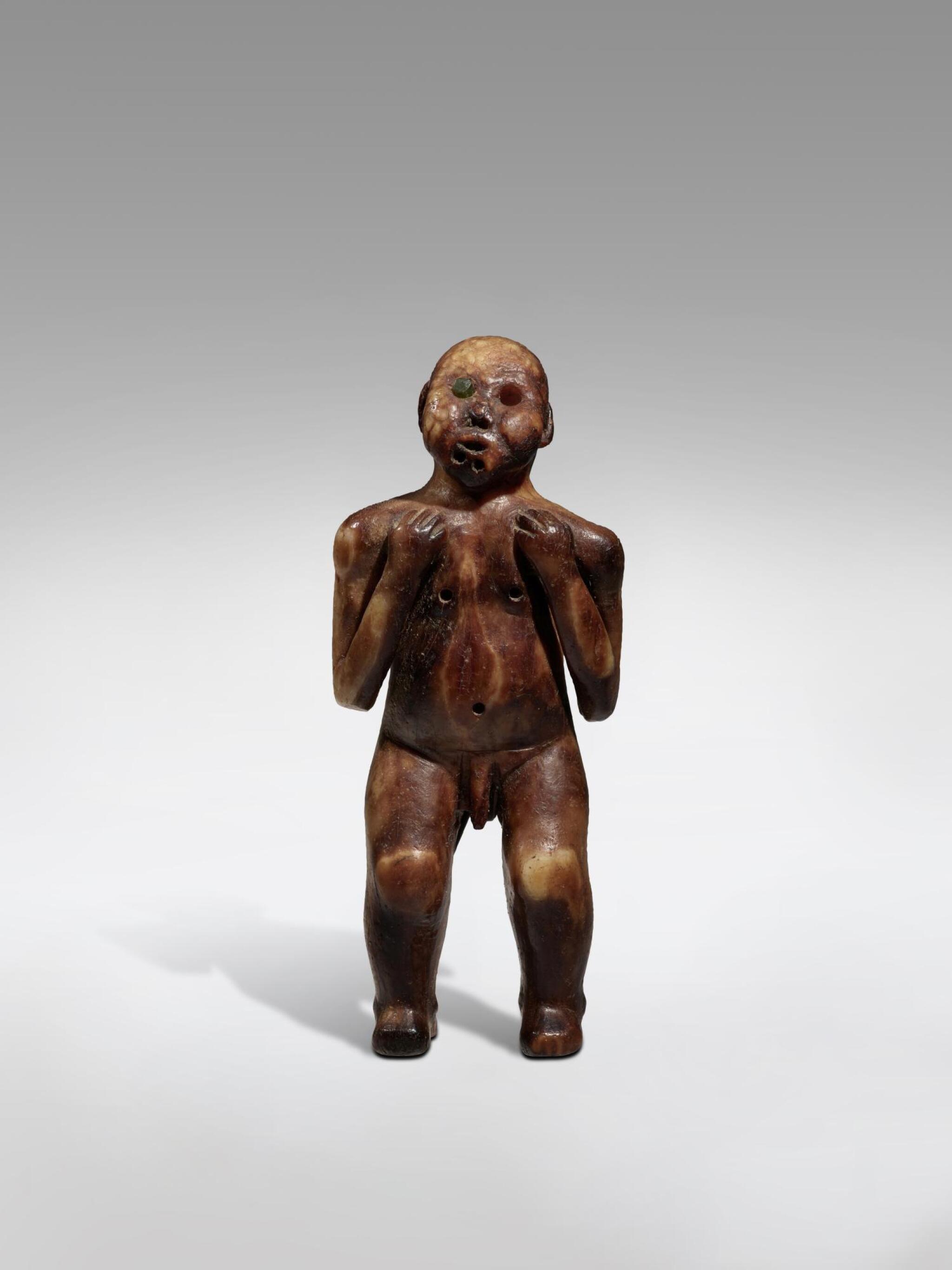 For further information on the condition of this lot please contact Paul.Lewis@sothebys.com

Elliot and Amy Lawrence, New York, acquired from the above on July 25, 1997

This extraordinary figure radiates an aura of power and physicality. Carved in a naturalistic manner by an artist of exceptional talent, the figure appears positively alive; seemingly captured mid-dance, we sense the latent possibility of what his next move might be. His head is cocked to one side, and his mouth is open as if he is singing or incanting in a shamanistic ritual. The thick, powerful neck seems to be tensed and the rounded cheeks filled with the breath of life. The hands are clasped to the chest, their rounded forms echoing the shape of the cheeks and the powerful deltoid muscles. The arms have been carefully cut or chiseled to leave negative space between them and the full and fleshy torso. This virtuoso touch, which is not visible from all angles, gives depth to the composition and adds to the sculpture's palpable dynamism and vitality. The thickset legs are flexed, and one foot is placed slightly further forward than the other. The knees and ankle joints are indicated in another naturalistic touch, while the slightly arched soles of the feet are subtly modelled.

A single inlay remains in one eye, while other hollow spaces surely held similar inlays; as well as the other eye, there were two inlays below the mouth (presumably intended to represent a labret) and others to the chest and the navel. The figure may once have had ear ornaments, too, for the center of each ear is pierced.

An extraordinary work of art that stands on its own singular merits, this figure does bear comparison with a figure found at Ekven on the coast of the Bering Strait. That figure represents a pregnant woman with a bulging abdomen and a proportional realism that recalls certain aspects of the present sculpture. Now in the collection of the State Museum of Oriental Art, Moscow (inv. no. 102 DR-IV), the female figure was found in one of the Old Bering Sea burials of Ekven, and is therefore of an earlier date than the present sculpture; the Ekven figure is said to belong to a tradition "encompassing aspects of [Old Bering Sea II] and the later [Old Bering Sea III] period" (Bronshtein and Dneprovsky, "Ancient Eskimo Art of Ekven" in Carpenter and Mooney, eds, Upside Down: Arctic Realities, Houston, 2011, p. 126; the figure is illustrated on p. 141, fig. 6).

The purpose of this extraordinary object remains elusive. Like the Okvik figures (see lot 13) the role of a sculpture such as this was probably complex and protean. Perhaps it was a charm, used to ensure success in some endeavour, or to transmit knowledge, or perhaps it was an aide in some shamanic practice, just as certain Okvik figures may have acted as a channel to the invisible world of the spirits. Perhaps too the contemplation of the figure provided its original owner with the same pleasure it gives us now, and invoked a similar sense of wonder.