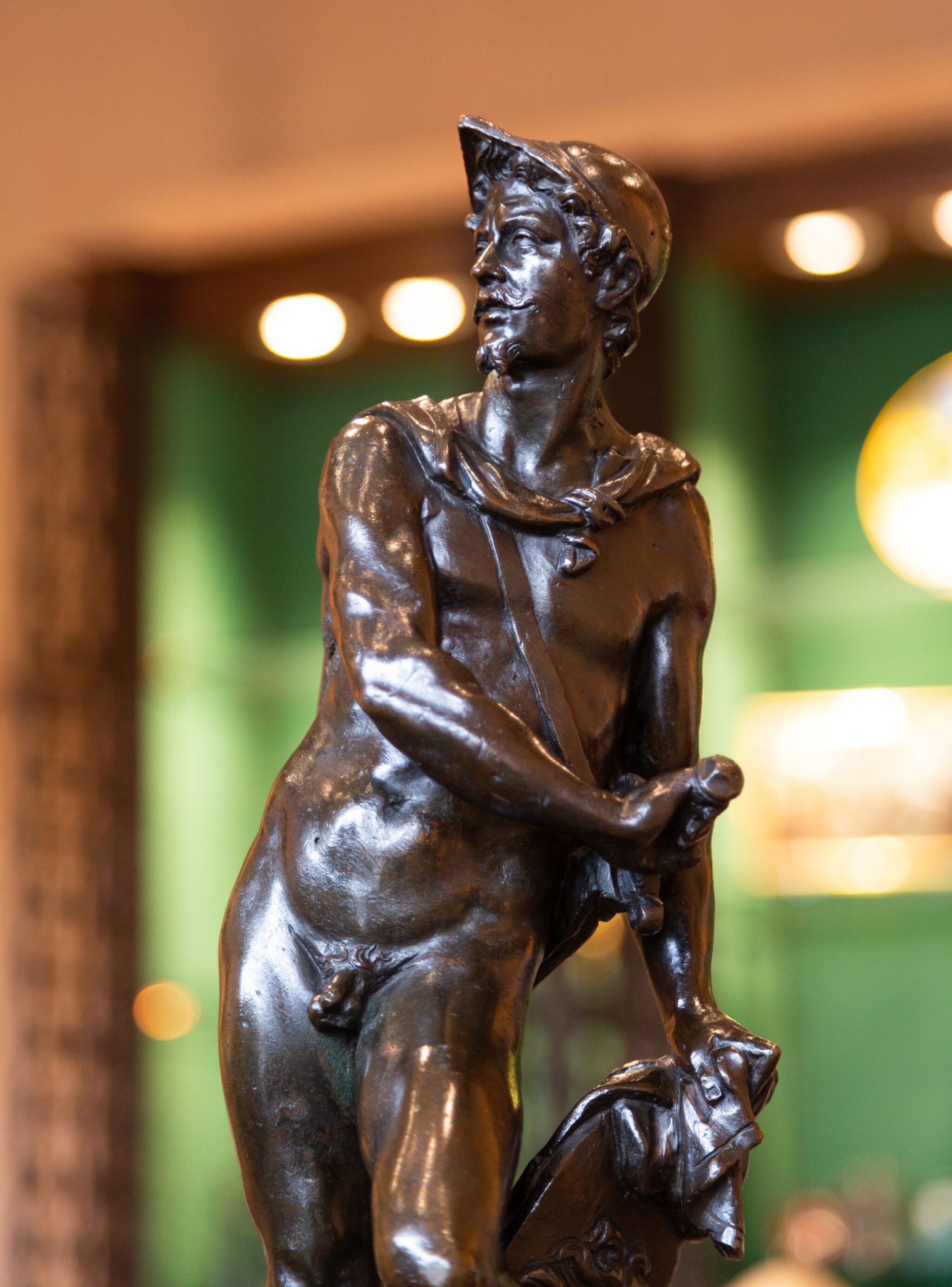 bronze, black patina; on an ebonised wooden base

This is a very good and precise cast, with casting flaws and lacuna due to casting technique in several places, as can be seen in the photographs, in particular to Mars’ neck, proper right shoulder and chest , as well as to his proper right foot.

A hole on the top of Mars’ helmet may indicate that a decoration is missing. The blade of his sword appears to have been reattached. Minor wear to the patina in some places, in particular to the high points with remains of vert de gris (oxidation).

As it is the case traditionally for this model, Mars is standing on an element of his cuirasse, which is fixed with a modern screw to the later wooden base.

The wooden base with some lacks and dents to the corners.

C. Kryza-Gersch, ‘Original Ideas and Their Reproduction in Venetian Foundries: Tiziano Aspetti’s Mars in the Frick Collection - A Case Study,’ in D. Pincus, Small Bronzes in the Renaissance, New Haven and Yale, 2001, pp. 143-157;

This beautifully cast figure of Mars attributed to Tiziano Aspetti relates to a bronze in the Frick Collection, New York (inv. no. 16. 2. 56), which is widely regarded as the prime version of this iconic model (Kryza-Gersch, op. cit.). A bronze Venus in the Accademia Carrara, Bergamo, has been posited as the missing pendant to the Frick statuette (Kryza-Gersch, op. cit., pp. 148-149).

The most important casts of Mars recorded include those: the exceptional figure of Mars from the Prof. Michael Jaffé collection, on loan in the Fitzwilliam museum, Cambridge (Sotheby's 03 December 2014, lot 72); a figure in the Basner collection, Danzig-Zoppot (untraced); the Richard von Kaufmann collection (sold Sotheby’s New York, 22 June 1989, lot 85); the Walter P. Chrysler collection (sold Christie’s New York, 11 January 1992, lot 132; paired with a Venus); the Bode Museum, Berlin (inv. no. 8647), as well as a fine pair of Mars and Venus, formerly in the Alfred Taubman and Cyril Humphris collections (sold Sotheby’s New York, 27 January 2016 , lot 14).

Tiziano Aspetti was the leading sculptor in Venise during the second half of the 16th century after Girolamo Campagna (1549-1625). In their mannerist poses and classicising monumentality, his works show the influence of Giambologna and Michelangelo. For much of his life Aspetti was resident sculptor to Giovanni Grimani, Patriach of Aquileia, who possessed one of the greatest collections of antiquities in Venice. None of his bronze statuettes are signed and, as such, attributions to his hand are often made in relation to his highly successful Paduan reliefs of The Martyrdom of Saint Daniel, which served to cement his reputation during his lifetime.