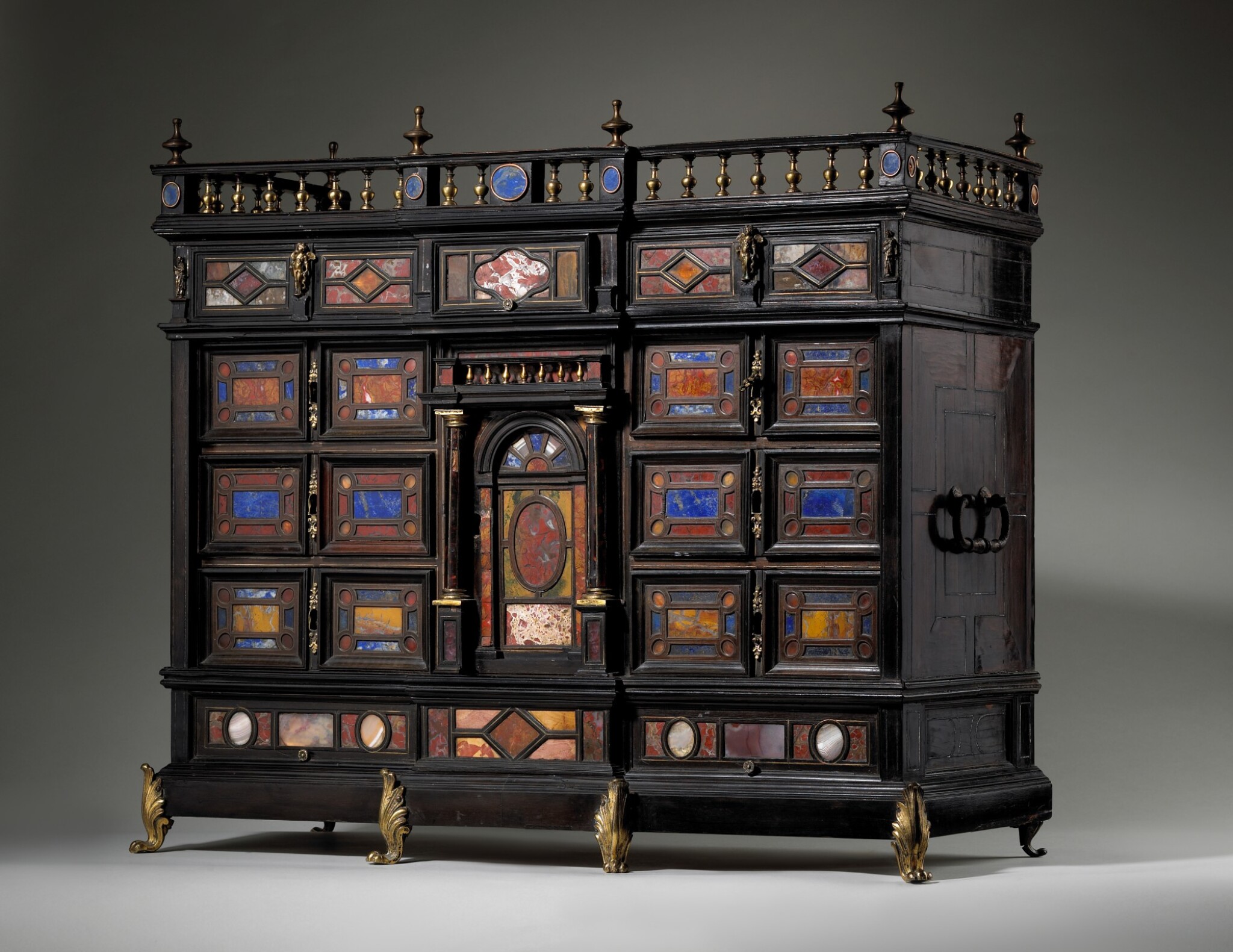 the three-quarter galleried top with geometrical patterns inlaid with metal, above three frieze drawers surmounting a central door opening to reveal a fitted interior with drawers, flanked on either sides by tortoiseshell columns and further three drawers on each side, above three further frieze drawers all inlaid with hardstones including jasper, agate and lapis lazuli

In overall good condition with minor old marks and scratches consistent with age and use. The ebony veneer with a minor age crack to the top and to the moulding just above the last drawer on the left handside, one small piece of the veneer re-stuck to one side at a corner, otherwise the metal inlays with very minor losses. The two bronze figures to the drawer above the cupboard door are missing. Otherwise the bronze mounts with minor tarnishing as should be visible in the catalogue images, and minor losses to gilding especially to handles. One tortoiseshell column with a loss and some of its veneered re-glued - some residual glue. The hardstones in good condition. Three keys. Decorative.

This lot contains endangered species. Sotheby's recommends that buyers check with their own government regarding any importation requirements prior to placing a bid. Please note that Sotheby's will not assist buyers with the shipment of this lot to the US. Please note that CITES licences are required for the export of any restricted species from the UK, including to EU countries. A buyer's inability to export or import these lots cannot justify a delay in payment or sale cancellation.

This magnificent architectural cabinet with hardstones inlaid in a geometric design is part of a distinct group of cabinets which were executed in Rome in the middle of the 17th century. Not only highly prized at the time of their commission for their intrinsic value displaying the beauty of stones and the highly skilled Roman craftsmanship, they also appealed later to Grand Tourists in the 18th and 19th centuries and still to collectors today.

Related examples with a three-quarter gallery and similar escutcheons include one sold at Sotheby’s, London, 9 July 2014, lot 4 from the collection of the Dukes of Northumberland and another similar including a gallery above the central cupboard door sold at Christie’s, London, 3 November 2016, lot 386. A further example with a typical geometrical composition was sold at Bonhams, London, 17 June 2009, lot 1.

Other cabinets from important collections and from the same group of Roman 17th century cabinets with rich inlays are recorded in public and private collections with the cabinet known as the ‘Pope's Cabinet’ in the Cabinet Room at Stourhead, Wiltshire which once belonged to Pope Sixtus V and the William Beckford pietre dure cabinet which once belonged to the Borghese family representing the epitome of Roman hardstone cabinets.

The appeal for hardstone inlaid cabinets

The foundation of the appeal for Roman inlaid cabinets is rooted in the archaeological discoveries in Rome from the 16th century onwards, which raised a great enthusiasm for all things related to Antiquity. Rome became a magnet for discerning collectors, and antique marbles began to be employed on Roman works of art. The desire to emulate the art of Ancient Rome, together with the craze for precious materials (of which Rome had an abundant supply) combined towards the middle of the 16th century to give rise to the Roman inlaid marble works known as commessi (from the Latin committere, to join together). The distinctive feature of these elaborate cabinets was their structure which included characteristic elements of Mannerist architecture, for example, a pediment, pilasters, columns on a façade concealing secret drawers. Whilst Roman cabinets opted for geometrical compositions using stones such as jaspers, agates and lapis lazuli, Florentine ones displayed more naturalistic motifs including flowers and birds.

There were large numbers of highly skilled craftsmen in 17th century Rome, many of whom were Lombard in origin, although the attribution to specific makers for these cabinets still remains unresolved. But the skills of theirs makers, the beauty and rarity of cabinets like the present are evident due to the stunning contrast of the colours and brilliance of the various precious hardstones and the gilt-bronze ornamentation.