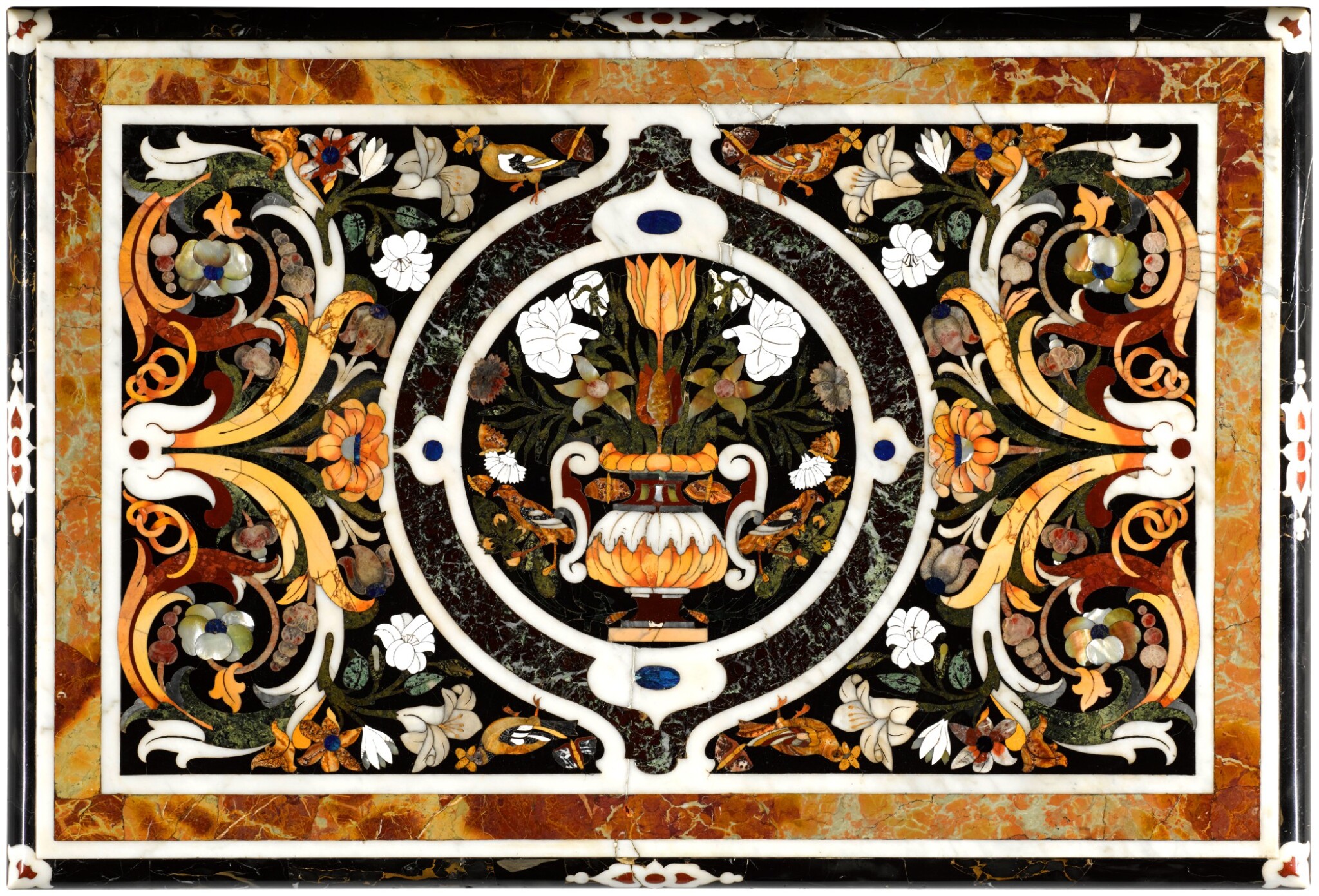 late 17th century, in the manner of Cosimo Fanzago

In overall good conserved condition with minor old marks, scuffs and scratches consistent with age and use. Signs of refilled cracks and associated refilled small losses. Sign of a break across the top.

This richly inlaid table top belongs to a group of Baroque table tops and altar fronts which were produced in Naples by marmorari, followers of the celebrated Cosimo Fanzago (1591-1678), architect and sculptor, considered to be one of the greatest figures of the Baroque period in Southern Italy.

By the early 17th century, the popularity of polychrome inlaid-marble decoration had spread from Florence and Rome to Naples, the largest and most important city in South Italy. Naples’ position as one of the centres for pietre dure further developed in 1738 when Carlos VII of Bourbon, King of Naples (later King Carlos III of Spain) established the Real Laboratorio delle Pietre Dure. Neapolitan pietre dure found in local churches offered highly dramatic, innovative, colourful and bold designs, often covering entire pavements and walls. This table top transposes this same striking language to a secular function and is one of the best examples of its kind.

And although the design of this panel is clearly inspired by Florentine models, the overall composition and the choice of materials and their inlay point to a Neapolitan origin. The clearly centralized design supplemented by lush foliage, blooming flower heads and birds relate to altar fronts in Neapolitan churches and more particularly to the work of Cosimo Fanzago, who arrived in Naples in 1608, where the market for sculptors and decorators was already vast and in continuous proliferation due to the exponential expansion of religious buildings in Naples.

The present example is also almost identical to a top sold at Sotheby’s, New York, 19 April 2012, lot 217 from the collection of Suzanne Saperstein (sold 194,500 USD). This suggests these two tops were conceived as a pair probably as part of one commission in the late 17th century. Another example of two similar Neapolitan tops in the manner of Cosimo Fanzago conceived as a pair were sold at Sotheby’s, London, Treasures, 6 July 2011, lot 11.

Descendant of an ancient family of chiselers, founders and makers of astronomical clocks, the cavalier Cosimo Fanzago, a title he earned in 1627, was born in 1591 in Clusone (Bergamo). He began his artistic activity between Milan and Bergamo but, upon his father’s death, moved to Naples where he lived with his mother and uncle, Pompeo Fanzago. Working in his early years alongside the sculptor Angelo Landi, whose daughter he married, Fanzago soon became one of the greatest sculptors and decorators of the Baroque period in Naples, with his best known work in the church of Certosa di San Martino, described in 1670 by the Roman priest Richard Lassels as "the most sumptuous thing in all Europe” (Quoted by Chaney, E. The Evolution of the Grand Tour, London, 1998, pp.113).

During his lifetime, Fanzago continuously maintained his expressive language. He treated architecture as sculpture and rigorously dramatized ordinary natural motifs, thus leading to theatrical visual effects. Fanzago's oeuvre can be characterized by the use of not only an astonishing variety of different marbles and stones, but also by the inclusion of mother-of-pearl; a combination of materials which was also used in this top.

Rosa Strygler, a child survivor of Auschwitz, renowned philanthropist and art patron, was a leading member of New York’s Holocaust Memorial Commission, which oversaw the design and development of the Museum of Jewish Heritage in New York.

Born in Krakow Poland in 1928, her Hasidic family was confined in the Krakow Ghetto until 1942 or 1943. Her family was then forced out of Poland and sent to Auschwitz. As the sole survivor of her Hassidic Bobover family, she was able to escape the concentration camp from a train outbound from Auschwitz. After a two-week walk, she would then work for a wealthy gentile family in Budapest, Hungary and then make her way to America on the Ernie Pyle as part of a Children’s Transport program for orphans in 1947. She was the only one of the 60 children on board who had no one to meet her when she arrived in New York City at the age of 19.

In 1949, she met and married her beloved husband, Harry Strygler, and together they built his company, H. S. Strygler & Company, into one of the country's largest importers and wholesalers of pearls and colored stones. They traveled the world together and worked side-by-side until his passing in 1994. Harry’s and Rosa’s daughter, Olivia, now owns H.S. Strygler & Company.

During her life, Rosa Strygler seems to have collected in New York a mix of English and Continental furniture pieces as well as Decorative Arts including Louis XV furniture and American silverware from the first half of the 19th century. This eclectic mix suggests her acute taste and eye for collecting.