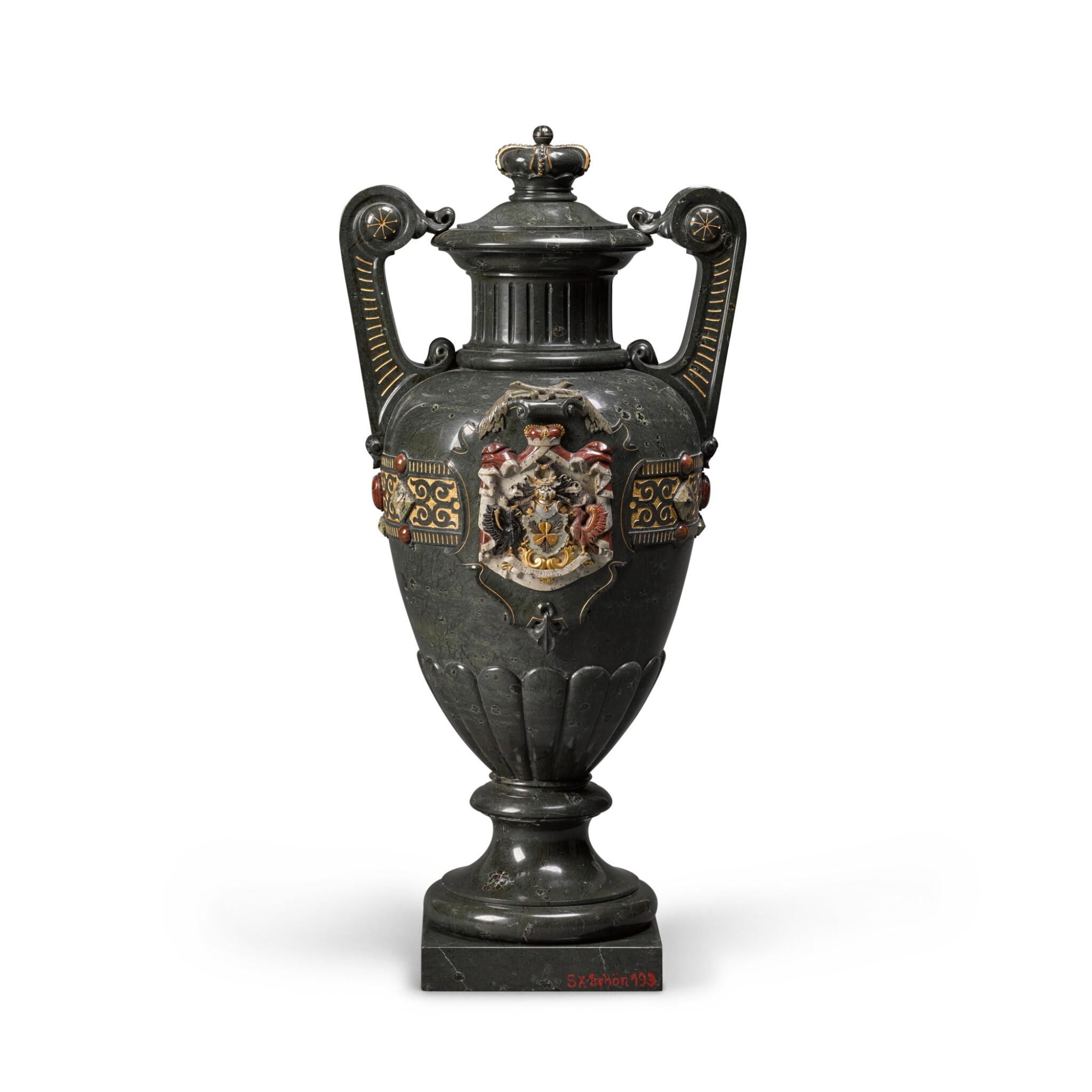 In overall very good conserved condition. Very minor old marks, scuffs and scratches consistent with age and use. Signs of restorations to the top of the socle. Ready to place.

The city of Zöblitz in Germany became known far beyond Saxony for its 500-year tradition of working serpentine stone with the main deposits located in the East of the city. Serpentine is a rock that exists in different colours and can be easily worked with metal tools. The stone is most commonly found in tones of black with a slight green cast and dark green varieties, and systematically with inclusions of garnet crystals (pyrope) which after a natural decomposition process are no longer of red colour. From wafer-thin to thicker lines, the lighter veins embedded in Zöblitz serpentine comes mainly from the mineral chrysotile.

Works in serpentine from Zöblitz delivered to the Saxon Royal court brought the city a certain prosperity and today the stone can be admired in many museums and churches around the world. For example, Zöblitz serpentine stone can be found in the architecture of the Catholic Court Church and the Semper Opera House in Dresden as well as in drinking jugs and bowls in the Green Vault Museum in Dresden. In the Serpentine Stone Museum in Zöblitz, the processing of this rare stone can be traced in a fully functional serpentine stone turning workshop dating from 1889.

The Bismarck Museum was established in the Bismarck family estate in Schönhausen, currently in Saxony-Anhalt, in 1891 to serve as a memorial to the great Prussian statesman, father of the German unification, Chancellor Otto von Bismarck. The collection comprised an assortment of personal memorabilia and gifts from all corners of the German Empire just like the present vase.

Otto Eduard Leopold von Bismarck was one of the most prominent European aristocrats and statesmen of the 19th century. As Minister-President of Prussia from 1862 to 1890, he engineered the unification of the numerous states of Germany. From 1867 on, he was Chancellor of the North German Confederation. The latter was enlarged in 1871 to the German Empire, as the first Chancellor of which Bismarck served until 1890. He is nicknamed the Iron Chancellor ("der Eiserne Kanzler"). He was made the Count of Bismarck-Schönhausen in 1865, and in 1871 became Prince (Fürst) of Bismarck. In 1890 he was also made the Duke of Lauenburg.