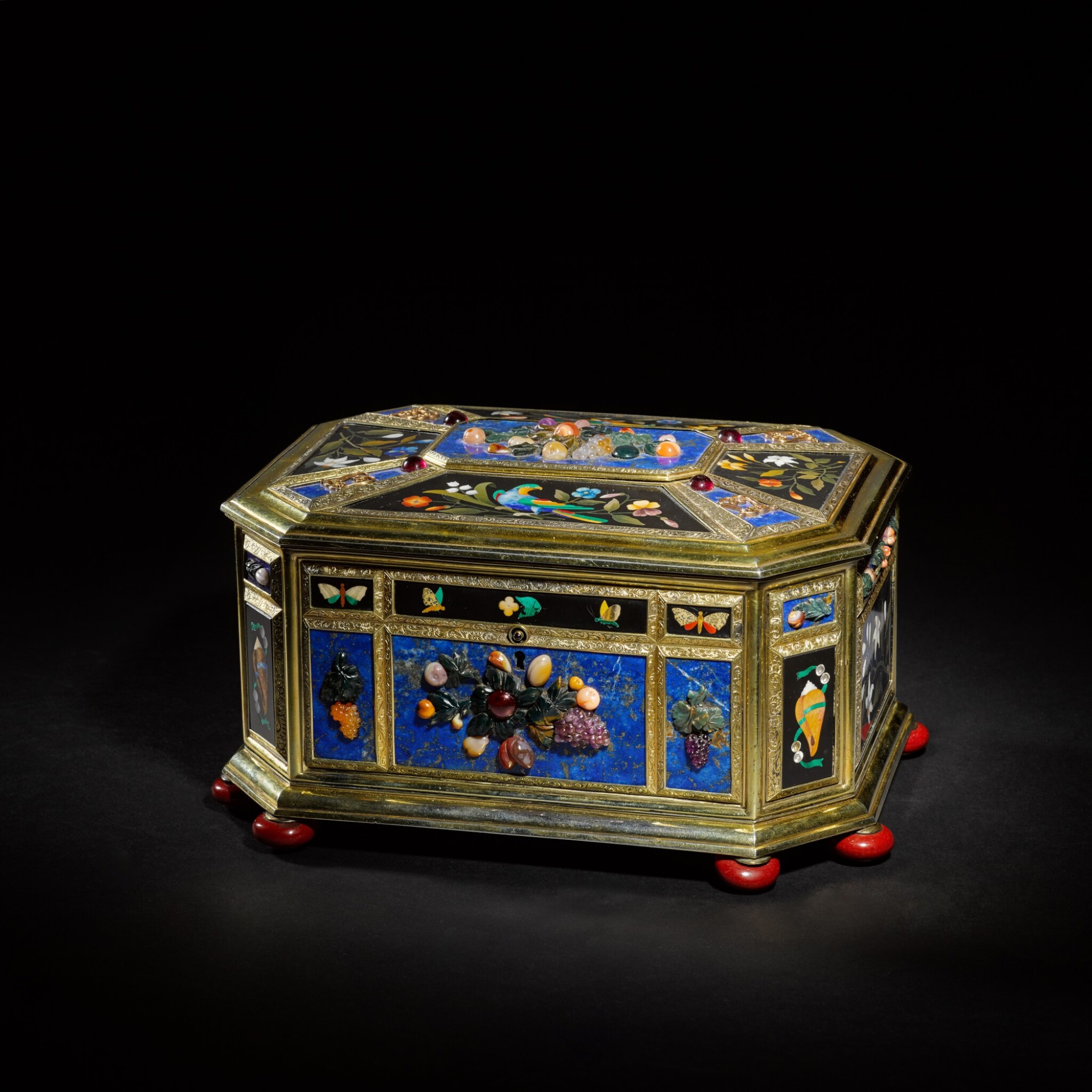 the top applied with a carved fruit group hardstone relief to the centre on a lapis lazuli ground, the panels around with pietre dure scenes on a black marble ground and applied interlaced Ls on a lapis lazuli ground divided into geometric reserves with engraved silver-gilt borders, the frieze decorated similarly with hardstones and pietre dure divided panels, on bun feet

In overall very good condition and ready to place. Very minor old marks and scratches consistent with age and use. One very small hairline crack to the corner of the pietra dura panel on the right side.

This rare and impressive silver-gilt casket, with very fine pietre dure panels, and in beautiful condition, is a fine example of luxury objets d’art produced by an expanding industry supplying a growing international elite that would travel around Europe. Its origin is slightly tantalizing as it does not bear a maker’s mark and its uniqueness makes it difficult to pinpoint a place of production.

The pietra dura panels recall the celebrated Florentine work, disseminated from the Grand Ducal Workshops, with the birds’ design seen on the lid clear successor of Jacopo Ligozzi’s creations, so much used by the Opificio. The vibrant palette, which uses malachite and lapis lazuli, nevertheless is different from what was seen in the Italian production.

The exquisite relief panels also follow the hardstone relief tradition seen in 17th century Florentine caskets, which will see a new uptake in Russia in the 19th century, where exceptional carved hardstone objects with assorted groups of flowers and fruits in relief were created. This tradition of relief carving can also be seen in Germany, where beautiful snuff boxes in the 18th century would incorporate hardstones in the same vein. The lapis lazuli used as ground for the reliefs is of a striking blue with gilt highlights (coming from the mineral pyrite) and it is possible that it is of Russian origin.

As said, its individuality is intriguing but Paris, as the capital of luxury in the 19th century, led by tasteful entrepreneurs and a hub for talented migrant artists and craftsmen, has also been suggested as a possible place of production for this intriguing and exquisite casket.