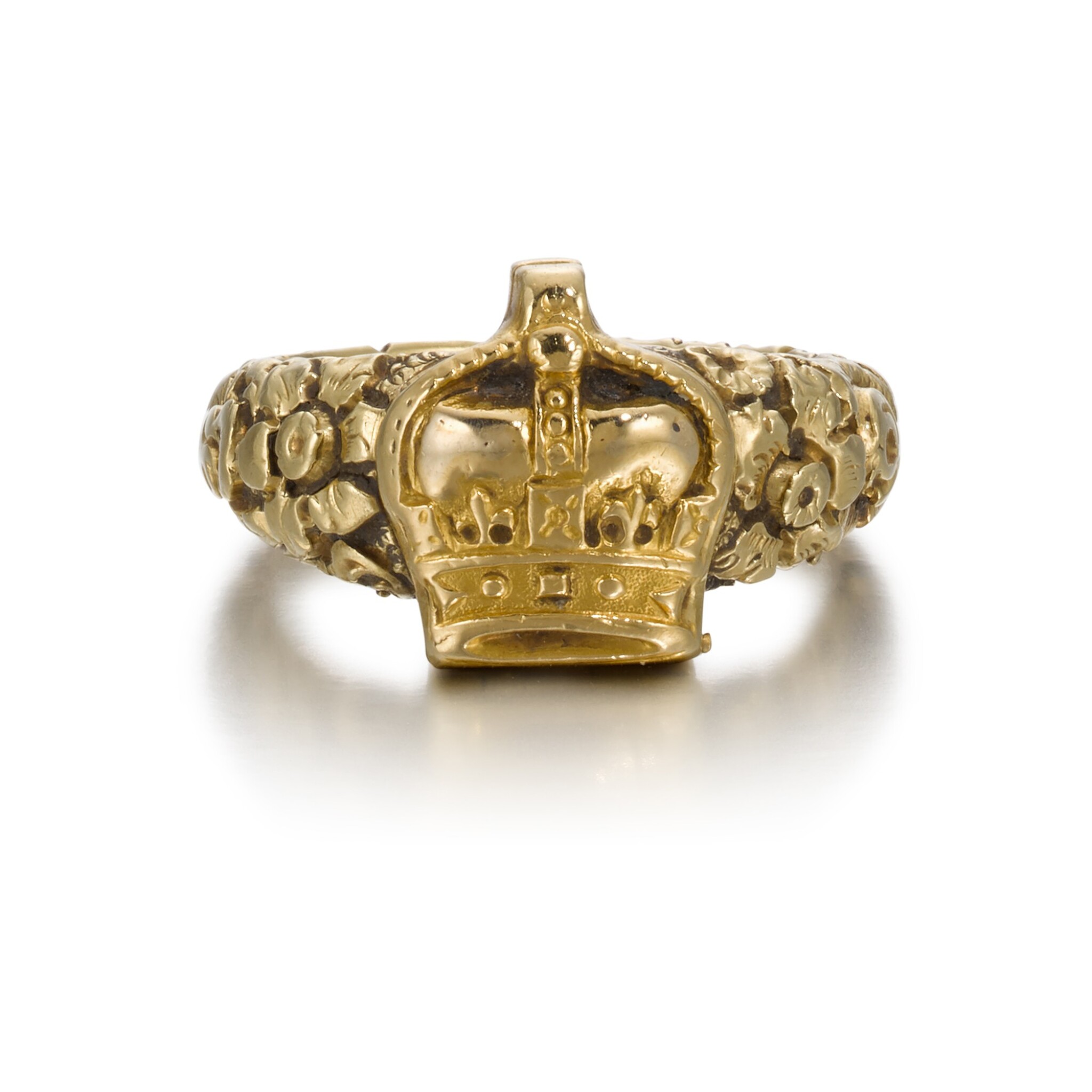 decorated with roses and other flowers in high relief, centred with a Royal crown, opening to reveal brunette hair under domed glass, the inside of the ring engraved with an inscription reading: In Memory of / Caroline of Brunswick / the Injured Queen of England / Nat: 17 May 1768, ob. 7 August 1821., in modern case

In good condition; some very light surface wear to crown as to be expected

‘I desire and direct that my body be not opened & that three days after my Death it be carried to Brunswick for interment & that the inscription upon my Coffin be “Here lies Caroline of Brunswick the injured Queen of England.”’

(From the second codicil, dated 7 August 1821, proved with the will of ‘Her Most Excellent Majesty Caroline Amelia Elizabeth Queen Consort of His Most Excellent Majesty King George the Fourth,’ in London on 4 February 1822.)1The marriage of Princess Caroline of Brunswick-Wolfenbüttel (1768-1821) to George, Prince of Wales, the future George IV (1762-1830), took place at the Chapel Royal, St. James’s, on 8 April 1795. The union had been arranged against George’s wishes and the couple had only just met for the first time four days earlier upon Caroline’s arrival in England from her native Brunswick. The Prince, already secretly and illegally married to Mrs. Fitzherbert (1756-1837), and currently involved with his latest mistress, the Countess of Jersey (1753-1821), was not impressed by his bride. Relations between them were strained from the start and he was reported to have been drunk during the wedding service.

Notwithstanding a mutual antipathy, George and Caroline managed to consummate their marriage: their daughter, Princess Charlotte of Wales was born at Carlton House, London on 7 January 1796.

Prince George soon pressed for a divorce, which could not be allowed, and the couple separated later that year, he having written to her, ‘we have unfortunately been oblig'd to acknowledge to each other that we cannot find happiness in our union.’ Princess Caroline repaired to a rented house in Blackheath and was denied regular access to her daughter. Later she decided to move to Italy and travelled around the Mediterranean, where her movements were spied upon and her ‘indiscreet and scandalous behaviour’ was reported back to London.

This gave grounds for her husband, who ascended the throne as George IV upon his father’s death on 29 January 1820, to seek a legal separation. Hearing of this, Caroline immediately returned to England where she was generally received with much sympathy. Matters came to a climax when, on 20 July 1821, the day of George’s Coronation, she was refused entry to the ceremony in Westminster Abbey. In spite of this this rebuff, she was received outside with ‘demonstrations of regard [which were] not confined to the humbler spectators. . . . [The crowd’s] manifestations of attachment assumed rather the character of tender sympathy than of animated applause [accompanied by] cries of “Bravo, Queen Caroline,” “God bless the Queen,” &c.’2

Following this humiliation, Caroline was granted an allowance of £50,000, so long as she agreed to leave England. Before she was able to make arrangements, however, she was suddenly taken ill and died shortly afterwards on 7 August 1821. Her wish for an inscribed coffin plate, expressed that very same day in the codicil to her will, may have been inspired by a passage from a letter dated the preceding 4 December to the editor of the Evening Mail. In it, the writer, John Tennant (1760-1822), a wealthy wine and brandy merchant of Trinity Square, City of London and Denmark Hill, Camberwell, described Caroline as ‘the long-persecuted and injured Queen of England.’3