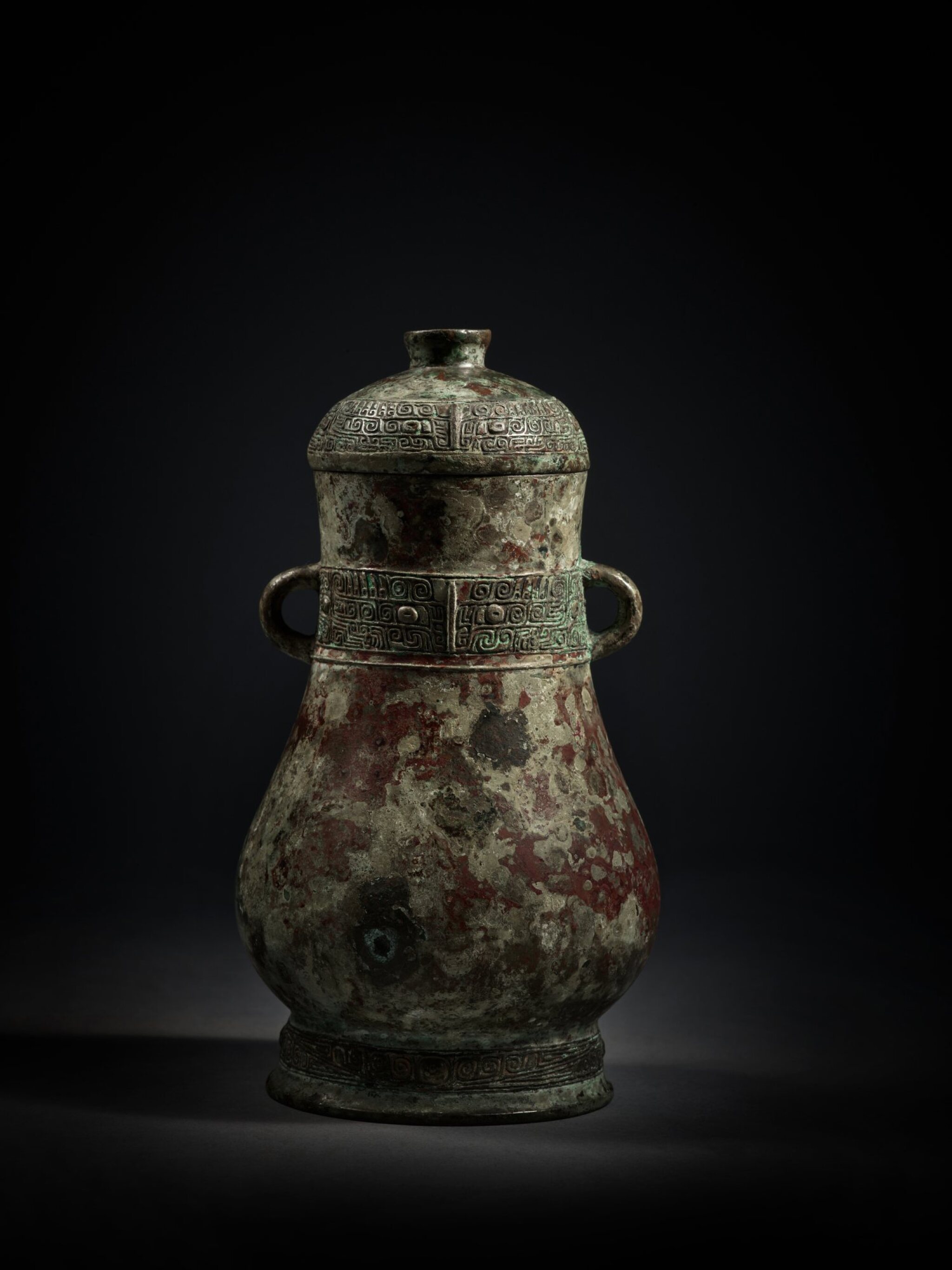 The Ju Fu Ding You

The vessel has a small minor impact area and a few small minor patches of surface restoration to the body. The cover is in overall good condition. Both the vessel and cover have some expected minor age-appropriate wear. X-Ray images available upon request.

Because this lot was imported into the United States after September 1, 2020, it is subject to an import tariff of 7.5% of the value declared upon entry into the United States. $9,375, plus applicable sales tax will be included on your invoice unless you instruct Sotheby's to arrange shipping of the lot to a foreign address. For more information on the import tariff, please review the Symbol Key in the back of the catalogue. If you have any questions, please contact tariffs@sothebys.com。

This bronze vessel, known as the Ju Fu Ding You, is well-proportioned and delicately cast with narrow bands of intricate designs. The three-character inscription on this piece can be translated to 'Father Ding of the Ju clan'. As evidenced by the volume of unearthed bronzes bearing this name, Ju was one of the largest clans active since the Shang dynasty (c. 1600-1046 BC). Although a gradual evolution of the pictogram Ju over the years can be observed, at least 168 bronzes were inscribed with the type of pictogram as can be seen on the present piece (see He Jingcheng, Shangzhou qingtongqi zushi mingwen yanjiu [Study of the clan pictograms on the bronzes from the Shang and Zhou dynasties], Jinan, 2009, pp 75, 328-32, appendix A001). Vessels of this type were used as wine containers in ancestral rituals during the Shang and Western Zhou (c. 1046-771 BC) periods.

At least three bronze you with lid and shoulder adorned with closely related triple bands appear to be recorded: a vessel from the Avery Brundage Collection in the Asian Art Museum, San Francisco (accession no. B60B82), with a handle terminating in rhinoceros heads, illustrated in René-Yvon Lefebvre D'Argencé, Bronze Vessels of Ancient China in the Avery Brundage Collection, San Francisco, 1977, pl. XXXV (right); another you with a five-character inscription, also with a handle ending with two animal heads, formerly in the collection of Sir Herbert Ingram, sold in our London rooms, 14th December 1982, lot 6, and now in the Meiyintang Collection, illustrated in Wang Tao, Chinese Bronzes from the Meiyintang Collection, London, 2009, pl. 30; and a further inscribed and handled you of larger scale, measuring 38.7cm in height, excavated in 1955 from Hejiacun, Qishan county, Shaanxi province, illustrated in Jessica Rawson, Western Zhou Ritual Bronzes from the Arthur M. Sackler Collections, vol. IIB, Washington D.C., 1990, p. 480, fig. 64.2.

The same inscription appears on a few other you of different form. See two examples: one of cylindrical shape, excavated in 1998 from the tomb in Qianzhangda, Tengzhou, Shangdong province, now in Tengzhou Museum, illustrated in Tengzhou Qianzhangda mudi / The tomb of Qianzhangda in Tengzhou, Beijing, 2005, p. 283; another of a similar silhouette to the present piece, but with an additional spout, sold in our London rooms, 14th March 1972, lot 8, and now in the Meiyintang Collection, illustrated in Wang Tao, op.cit., pl. 31.