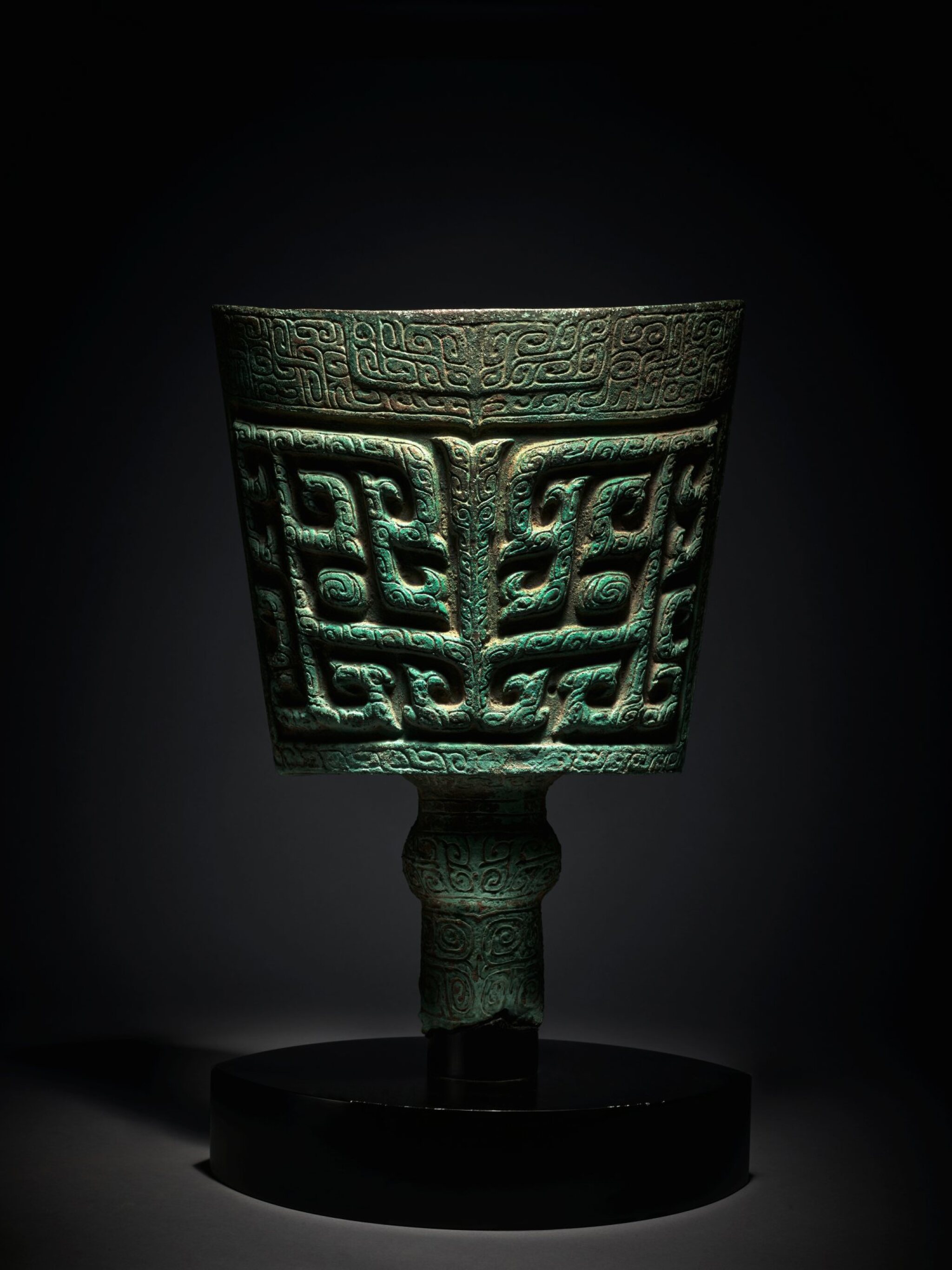 In overall good condition with some losses to the rim of the handle. Some expected wear with occasional minute chips and losses to the extremities.

《From Ancient Kingdoms to Imperial China》，吉賽爾，紐約，1998年，圖版26及封面

Sounds of the Southern Territories: A large Nao from the Yangzi River Basin

Exuding power and mystique, this exceptional large bell, nao, belongs firmly to the tradition of the bronze industries along the Yangzi river produced at the time of the Shang and Zhou dynasties, with a regional style entirely distinct from the northern tradition of Anyang bronze casting.

In ancient China, bells were both aurally and visually the most prominent instruments of musical ensembles, occupying a central role in the prescribed rituals of ancestor veneration. Intended to stand mouth upwards, raised on a hollow tubular shank, yong, with an almond-shaped cross-section, nao were designed to be struck with a mallet, with the player able to obtain different notes from the bell depending on where it was struck; the greater the size, the greater the volume of sound.

The earliest known Chinese bells are small ‘clapper’ bells, typically fixed to a belt or collar, made of fired clay or copper, from the late Neolithic period. By the Erlitou period of China’s early bronze age, clapper bells were produced in bronze and were status symbols, associated with persons of high rank and accordingly found in the largest and most lavish tombs. The upwards-orientation of the nao form emerged during the Shang dynasty, with the distinct shape possibly based on the duo, a clapper bell cast with a pronounced shank; see Music in the Age of Confucius, Freer Gallery of Art and Arthur M. Sackler Gallery, Washington D.C., 2000, p. 46.

Large nao, such as the present bell, have been found in excavations in southern China, primarily in northern Hunan province, but also further east along the Yangzi river basin, in Hubei, Jiangxi, Anhui, Jiangsu and Zhejiang, across an expansive region controlled by southern bronze-using cultures, whose territory is known only through scattered archaeological finds. The geography of the discoveries of similar bells strongly suggests that the south had developed its own bronze casting tradition independent of the northern bronze centers. Whilst most of the early nao found at Anyang are small and in sets of three; virtually all southern bells have been discovered in isolated hoards, offering few clues to dating through stratigraphic relationships or association with other artifacts. For this reason, Jessica Rawson advises that the series of nao bells are considered independent of more securely dated bronzes of the north.

Another crucial differentiation is that the southern bells are often found singly, rather than in sets. In instances where two or more have been found together, their sizes and designs vary significantly. In the exhibition catalogue Music in the Age of Confucius, op. cit., p. 49, Robert W. Bagley speculates that unmatched groups of southern bells found together were likely manufactured at different southern workshops and assembled based on their tonal properties, with the measured A-tones of the bells discovered together spaced at accurate semitone intervals.

The discovery in 1989 of a princely tomb at Jiangxi Xin’gan, Dayangzhou, provided valuable insight into the dating of nao as a quantity of bronzes of southern manufacture were discovered together with datable ceramics. The tomb was dated to the second phase of the Wucheng Culture, roughly contemporaneous with the Upper Erligang and early Anyang phases of the Shang dynasty. Three nao discovered at the Dayangzhou site are illustrated in Jenny So, Eastern Zhou Ritual Bronzes from the Arthur M. Sackler Collection, Washington D.C., 1995, p. 440, figs M17-19.

Stylistically, the present bell belongs to a distinct group of nao which Jenny So speculates was produced after the Dayangzhou group, possibly in the 12th or 11th century BC. The nao from this group were generally made in extremely large size, up to 103cm in height, with massive protruding mask-derived motifs in recessed panels and raised collars or bulges around the shank of a bell, called xuan, and have mostly been found at sites along the Xiang River in Hunan province. Bells in this category include one discovered in 1977 in Ningxiang, Laoliangcang Beifengtan, illustrated in Robert W. Bagley, Shang Ritual Bronzes in the Arthur M. Sackler Collections, vol. 1, Washington D.C., p. 117, fig. 163; and another now in the Portland Art Museum, acquired by the museum in 1954 (accession no. 54.29), illustrated in ibid., fig. 166. In 1959, five bells were discovered neatly arranged in two rows in a pit in Shiguzhai, Laoliangcang, Ningxiang county in Hunan; two of which are illustrated in ibid., figs 164-5, and a third was included in the exhibition Along the Yangzi River. Regional Culture of the Bronze Age from Hunan, China Institute, New York, cat. no. 22. Another smaller (28.8cm high) bell in the collection of the Metropolitan Museum of Art, New York (accession no. 43.24.2a,b), which was acquired from Tonying & Co. in 1943, is cast with a similar design profusely embellished with intaglio lines and attributed to the 13th century BC.

根據本品風格推斷，其應屬蘇淑芳所述的一類公元前12至11世紀風格獨特的鐃器，其年份應晚於大洋洲程家遺址所出。這種鐃尤為碩大，高者可至103公分，鐃面飾有高浮雕的獸面紋飾，甬上置旋，這種風格的鐃大多在湖南省湘江一帶發現。相類例可參考羅伯特・巴格利所著《Shang Ritual Bronzes in the Arthur M. Sackler Collections》中兩器，其一於1977年在湖南長沙寧鄉老糧倉鎮被發現，錄於卷1，頁117，圖編163，其二1954年由波特蘭藝術博物館購入收藏至今，館藏編號54.29，載於上述出處，圖166。1959年，五件排列整齊的鐃被發現於湖南長沙寧鄉老糧倉師古寨，其中兩件收錄於上述出處，圖164-165，另一件曾展於華美協進社舉辦的展覽《Along the Yangzi River. Regional Culture of the Bronze Age from Hunan》，紐約，編號22。另見一尺寸較小（高28.8公分）近例，飾相類紋飾，斷代公元前13世紀，紐約大都會藝術博物館於1943年從通運公司購入，收藏至今，館藏編號43.24.2a, b。