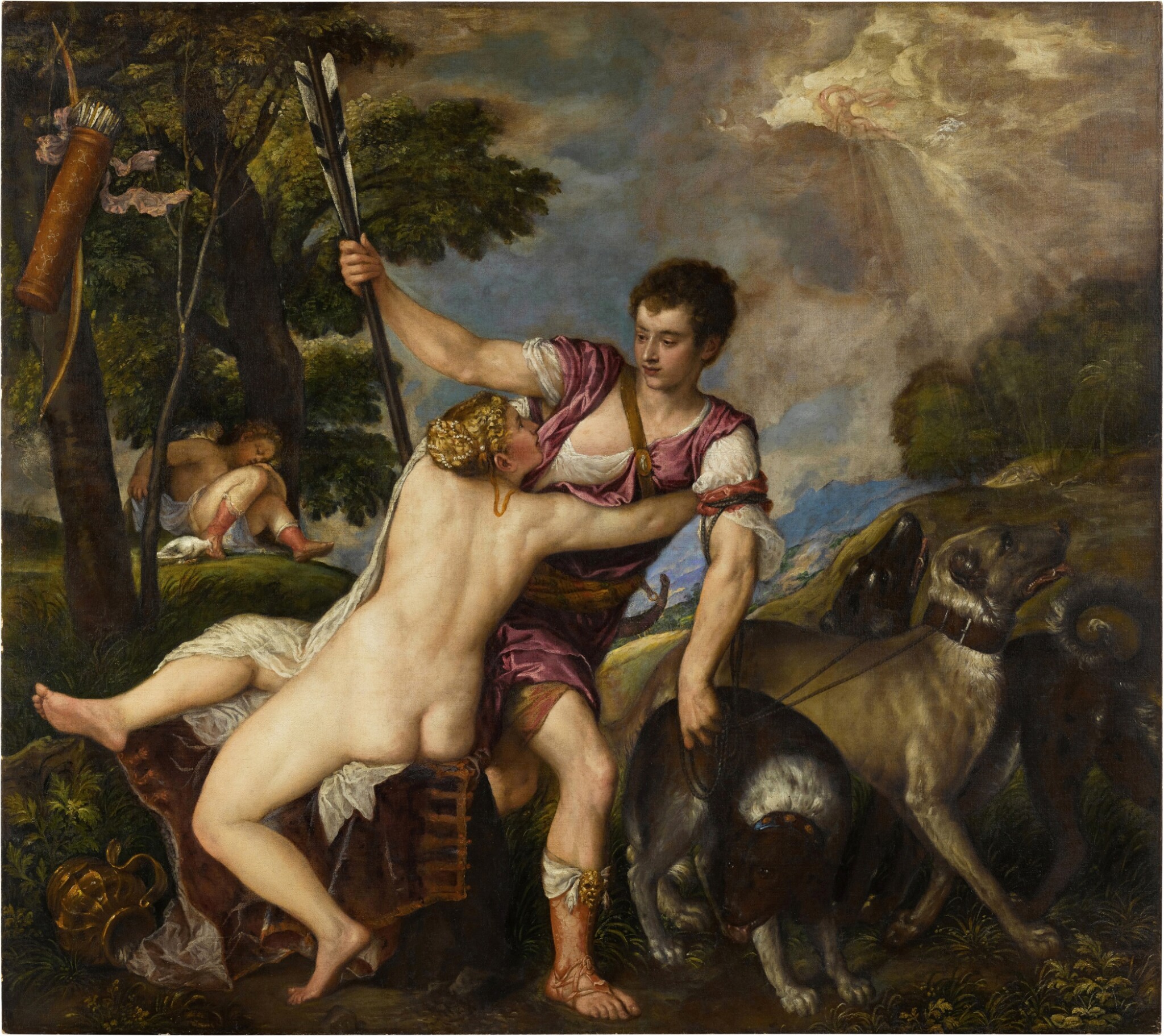 The painting is lined and there is good adhesion between the original canvas and the lining fabric. Good tension is retained across the painting. There is a visible central horizontal sewn join with minimal paint loss along it. The paint layer is stable and secure and exhibits the energetic and technical skill of the artist; the speed and vigour of application is apparent. The more thinly applied passages of paint have become more transparent over time; recent careful strengthening of these passages, most noticeable in the sky above Adonis' head, has been undertaken. The darker paint to the dog at the back of the pack has become transparent and the ground colour and canvas texture is exposed. Small fractures to the paint layer can be detected using raking light; these have a small degree of paint loss which has been addressed and they do not disrupt the reading of the composition. On close inspection, minor pin prick loss can be discerned through some of the flesh tones, noticeably the back of Venus, where exposure of the dark ground can be seen. Slight loss of form through this area has resulted, although the subtlety of modelling is retained. Other areas affected in this way include Venus' proper right foot and the arms and right leg of Adonis. Minor scattered retouchings are visible across the surface. Original textured brushwork through the drapery is well preserved and impasted highlights, demonstrated by the metallic urn, lower left corner, are retained. The paint to the foliage is in a good original state and the subtle and delicate brushwork through hair and facial features is well preserved. The painting is unified and presents well.

Probably by inheritance to his niece Princess Maria Anna Victoria of Savoy-Carignan-Soissons (1683–1763);

Possibly his sale (‘The Property of Mr. Bryan’), London, Coxe, Burrell and Foster, at Mr. Bryan’s Gallery in Pall Mall, 17–19 May 1798, Third Day’s Sale, lot 41 (as ‘Titian – Venus and Adonis. Titian has treated his favourite subject in this picture with unusual success. The design is grand and correct, and the expression of the heads most beautiful. It was brought to this country by a nobleman distinguished for taste, and is one of the finest pictures of this great master’), for £152–5s.;

Maximilian, Freiherr von Heyl zu Herrnsheim (1844–1925), Darmstadt, by whom stated to have been purchased on the advice of the painter Franz von Lenbach (d. 1904);

W. Buchanan, Edinburgh, letter to J. Irvine in Italy, 25 February 1804 in Brigstocke 1982, Letter 27, p. 148 (‘[…] West had last year on sale, or belonging to Beckford, the same subject, which he got from France, and which was infinitely superior to Angerstein’s [The National Gallery, London] […] I rather suspect the Titian was Beckford’s as I understand the Poussin belonged to him, and as Porter said he would have given West a large sum for the Titian if he would have sold it.’);

W. Buchanan, Edinburgh, letter to D. Stewart in London, 27 February 1804 in Brigstocke 1982, Letter 28, p. 153 (‘I should wish much to know what price West got for that in his possession last year [Titian’s Venus and Adonis] which was very superior to Angerstein’s [The National Gallery, London], or if it is still with him and what he values it at. If you can get a peep at it I think you will be gratified much as it is the finest and clearest Titian I ever saw, and gives one an excellent idea of the Master, besides it may be of use by way of comparison with that now in Rome should Irvine think it an object worthy to send to this Country. […] a subject which was four or five times repeated by Titian. There was one in France which is West’s [this lot] – one in the Colonna which is Angerstein’s – one in the Borghese Palace at Rome [unidentified; possibly a mistake for Barberini] – and one at Venice, which is that now in Rome [ex Torlonia]’);

W. Buchanan, Edinburgh, letter to D. Stewart in London, 1 March 1804 in Brigstocke 1982, Letter 29, p. 156 (‘The great masters often repeat the same subject. Thus West's Titian [Venus and Adonis] might be as much doubted as my Parmigiano if duplicates or quadruplicates created a doubt – as it is very well known that the Borghese [Barberini?] Titian of the same subject is the finest by far of that subject in existence and that is still in Rome.’);

W. Buchanan, London, letter to D. Stewart in Edinburgh, 23 December 1804 in Brigstocke 1982, Letter 81, p. 361 (‘from the Mariscotti Palace [ex Lord Darnley/ Metropolitan Museum of Art, New York] [...] and a fine Venus and Adonis by Titian, a smaller picture than either Angerstein's or West's’);

J. Young, A Catalogue of the Pictures at Leigh Court, near Bristol, the seat of Philip John Miles, Esq. M.P., with etchings from the whole collection, London 1822, pp. 22–23, p. 4, no. 4 (as hanging in the Saloon; ‘for many years in the possession of Mr. West, the late President of the Royal Academy, who considered it one of the most perfect and beautiful works of the Master’; etching by John Young);

W. Buchanan, Memoirs of Painting with a Chronological History of the Importation of Pictures by the Great Masters into England since the French Revolution, 2 vols, London 1824, vol. I, p. 291, no. 41, under ‘Introduction to the Collection of Mr. Bryan’s Pictures sold by Mr. Coxe, 17th May, 1798, Third Day’s Sale, at Mr. Bryan’s Gallery in Pall Mall’ (as ‘TITIAN. – Venus and Adonis. Titian has treated his favourite subject in this picture with unusual success. The design is grand and correct, and the expression of the heads most beautiful. It was brought to this country by a nobleman distinguished for taste, and is one of the finest pictures of this great master… £152–5s.’);

A. Hume, Notices of the Life and Works of Titian, London 1829, p. 65 (as ‘A large picture of Venus and Adonis from the ORLEANS Gallery, but not offered for sale with the rest of that Collection, it having been made a present of to the late Mr. West, who sold it to Mr. Hart Davis, it is said for £4000, and is now the property of Mr. Mills of Leigh Court, near Bristol’);

J.A. Crowe and G.B. Cavalcaselle, Life and Times of Titian, 2 vols, London 1877, vol. II, p. 151 and note (erroneously as a copy of the [lost] Farnese picture; as at Leigh Court, having belonged to Sir Benjamin West; ‘by some old Venetian follower of Titian’);

R. Goffen, Titian’s Women, New Haven and London 1997, pp. 248–50, reproduced in colour on p. 251, fig. 148 (as Titian, 1559; as the composition closest to that in the Prado; one of three versions [together with those in Los Angeles and Washington] that ‘may be considered works by Titian himself, with varying degrees of assistance’);

C. Diekamp, ‘Die Galerie im Oberen Belvedere und die Bildsammlung Prinz Eugens im Belvedere und Stadtpalais’, in Prinz Eugen Feldherr Philosoph und Kunstfreund, exh. cat., Belvedere, Vienna, 2010, pp. 127, 129, 134, 135, 136–37, under no. III.4, Kleiner's view of gallery reproduced on pp. 132–33 (conflating the Vienna and Orléans pictures on account of the compositional similarities between the engravings by Kleiner of 1734 and Couché of 1786 [the latter has since been shown to be the Getty version]; and noting that Eugene's picture has not been taken into serious consideration by Titian research to date);

A. Cobbe, ‘The Genesis of Titian's Rokeby Venus and Adonis, an account of its Technical Examination and Conservation’, in Kermes, XXXII, 114–115, April–September 2019, pp. 65, 67 and 72 (as one of three works in which the figure of Adonis is painted with longer legs: Moscow [i.e. ex-Moscow, private collection, now private collection, Switzerland]; Prado; and Switzerland [i.e. this lot]);

P. Humfrey, ‘The Collection of Philip John Miles at Leigh Court’, Colnaghi Studies Journal, no. 7, October 2020, p. 19, reproduced in colour fig. 13 (as Titian and workshop; ‘a high-quality version of Titian’s Venus and Adonis’);