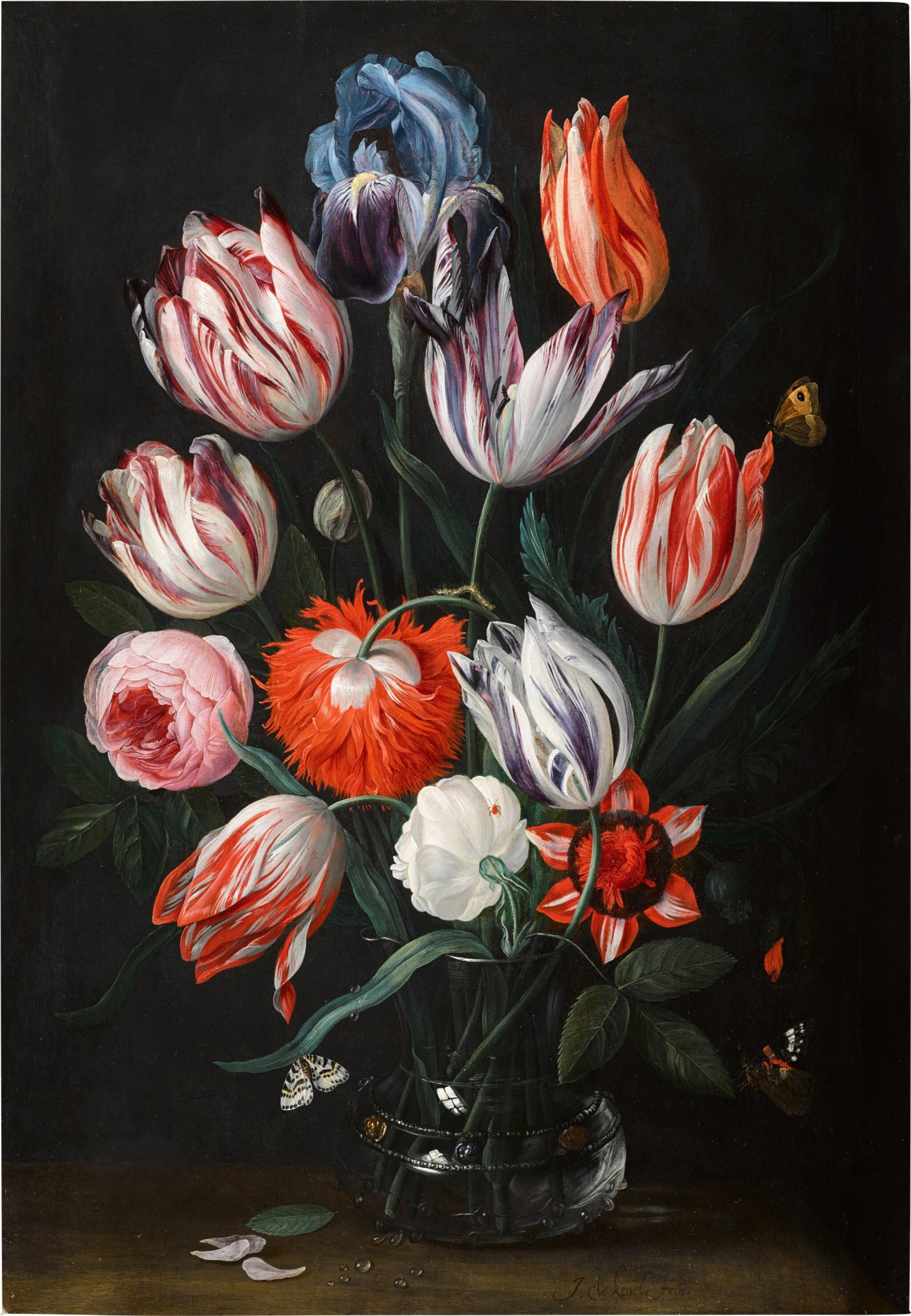 oil on panel (including vertical additions of 2 cm. on the left and right margins)

The oak support has been transferred and 2cm wide later additions have been added to the vertical edges. The vertical remains of a full cradle are in situ to the reverse. The paint layer is stable and secure and there are raised vertical ridges of paint following the wood grain and visible in raking light. The paint layer is well preserved and in good original condition. Minor loss down the vertical ridges has been recently addressed along with very minor strengthening to thinness of the paint to the background; this is visible under U-V light along with a reduction of the pentiment around the red tulip upper right. The signature is well preserved and the energetic textured brushwork and the crisply applied paint is in a good original state. Fine details and chromatic subtleties are retained. Minor strengthening to the butterfly lower right can be detected. Overall, the painting presents well.

With A. Staal, Amsterdam;

San Diego, The San Diego Museum of Art, Brueghel to Canaletto, European Masterpieces from the Grasset Collection, 2 April – 2 August 2016, no. 11;

Saint Petersburg, Florida, Museum of Fine Arts, A Feast for the Eyes, European Masterpieces from the Grasset Collection, 23 March – 2 September 2019, no. 28.

Dated by Klaus Ertz to around 1660, this signed floral still life is an example of Jan van Kessel at the height of his career. Executed with the artist's characteristic palette and rich clear colouring, the work represents a high point in Flemish floral still-life painting, which only first came into being roughly half a century earlier.

Although known as one of the most versatile Flemish still-life painters, Van Kessel's work as a flower painter was singled out when he was accepted as a master in the Antwerp guild in around 1645. His still lifes are partly indebted to those produced by his grandfather Jan Brueghel the Elder and his uncle Jan Breughel the Younger, although these influences never came at the cost of his own particular style and method. The most significant set of Van Kessel's paintings in this genre is perhaps a set of eight copper panels dated 1652, with their Spanish provenance a sign of the demand for the artist's works across the continent.1

The beautifully observed flowers in this vase include tulips, roses and poppy anemones. Finally, the bouquet is crowned by an iris, its blue hues contrasting with the dominance of pinks, reds and purples in the ensemble. Also contained within the arrangement are a caterpillar, a lone red insect and three delicately perched butterflies. The artist's ability to trick the eye is encountered particularly in the delicately painted translucent glass vase, with minute water droplets enhancing the effect to perfection.

The handling of paint and use of clear, strong colours with a lively touch, is typical of the Van Kessel's manner. The remains of a pentiment in the tulip in the top right is evidence perhaps of his reworking the arrangement while painting directly onto the panel. Despite Van Kessel being a prolific artist, Ertz dated relatively few floral still lifes of this type to the same period of around 1660.2 At least two other floral still lifes featuring the same type of glass vessel have been recorded on the art market in recent decades.3