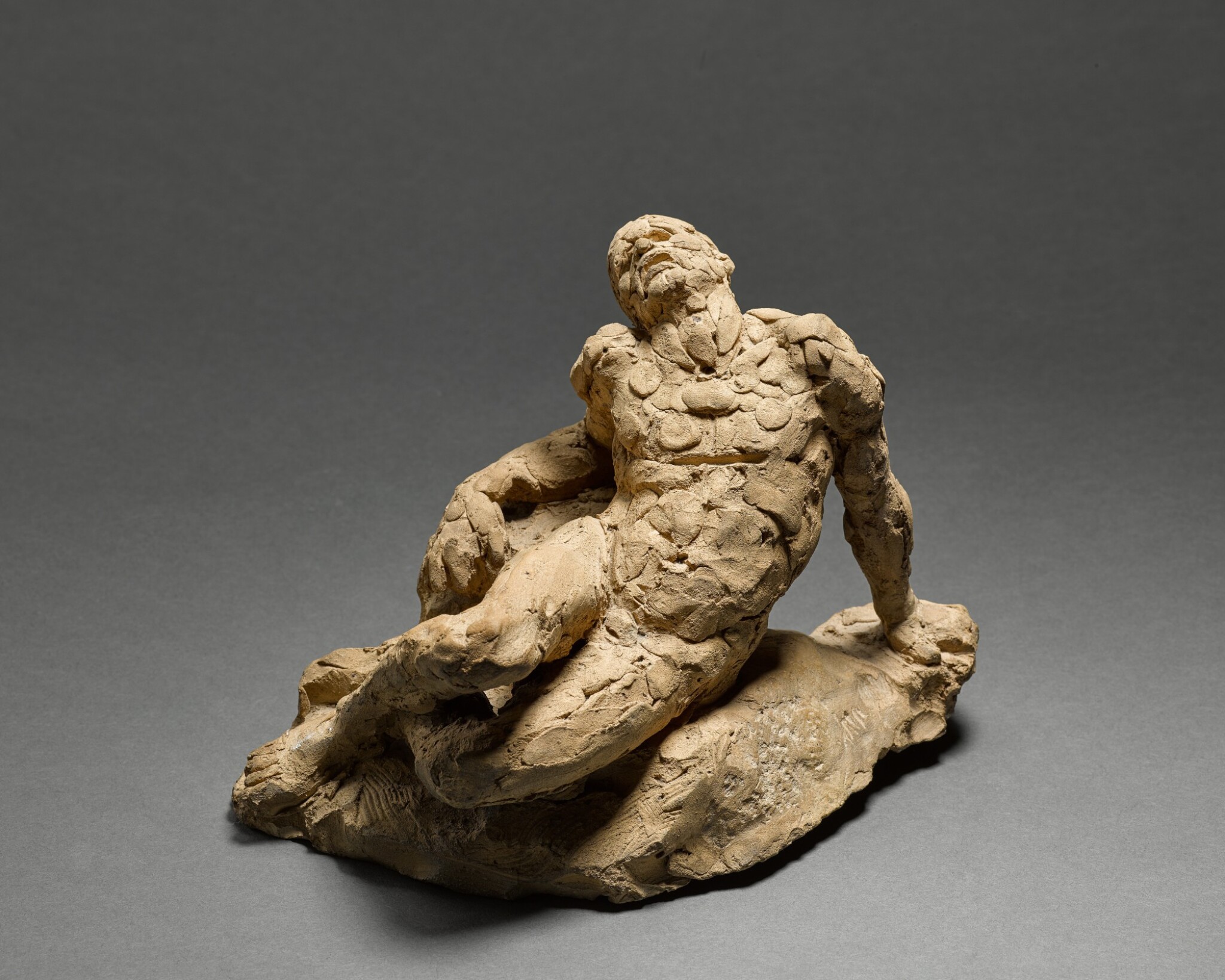 Overall in good condition with minor surface dirt and wear consistent with age. There is a well-concealed restored break to the base on the right side and through the figure's proper left wrist.

This expressive terracotta of a reclining man is a nude study of intense emotion. The figure leans back uncomfortably on the ground, his head thrown back with an expression of anguish on his face. He is a figure either in supplication, or who appears to be wounded. This iconography relates directly to the famous antique marble of the Dying Gladiator, which has inspired sculptors since its discovery around 1623. This is only the starting point for the present bozzetto in which the man looks up in agony, rather than down in noble submission. This composition could have formed part of an equestrian group of a ruler trampling his foe, comparable to the Hubert Le Sueur bronze group of Henri IV on horseback trampling his Enemy in the V&A (inv. no. A1-1992), or represent a general concept such as abandonment.

When this terracotta was catalogued as part of the Sackler collection (Avery, op. cit.) it was associated with works close to Pierre Puget in terms of the technique, and with French sculpture around 1700 generally in terms of the prevalence at the time for male subjects with a febrile and agonized appearance, which challenged the sculptors ability to convey extreme emotion. The position of the head and shoulders, and agonised expression in this terracotta can be compared in feeling with Pierre Puget’s famous Milo of Croton marble in the Louvre (inv. no. MR2075).

The technique of using small distinct patches of clay to build up the anatomy is handled with confidence and demonstrates the sculptor’s assured understanding of anatomy. Some areas, such as the right leg are smoothed down and there is a bold incision defining the chest. The sculptor has explored the figure in the round and powerfully conveys the expiring strength of his subject. An attribution to the English sculptor Caius Gabriel Cibber (1630-1700) on the basis of a compositional affinity his figures on the gates of Bedlam Hospital has been mooted, but at present this powerful terracotta defies a definitive attribution.