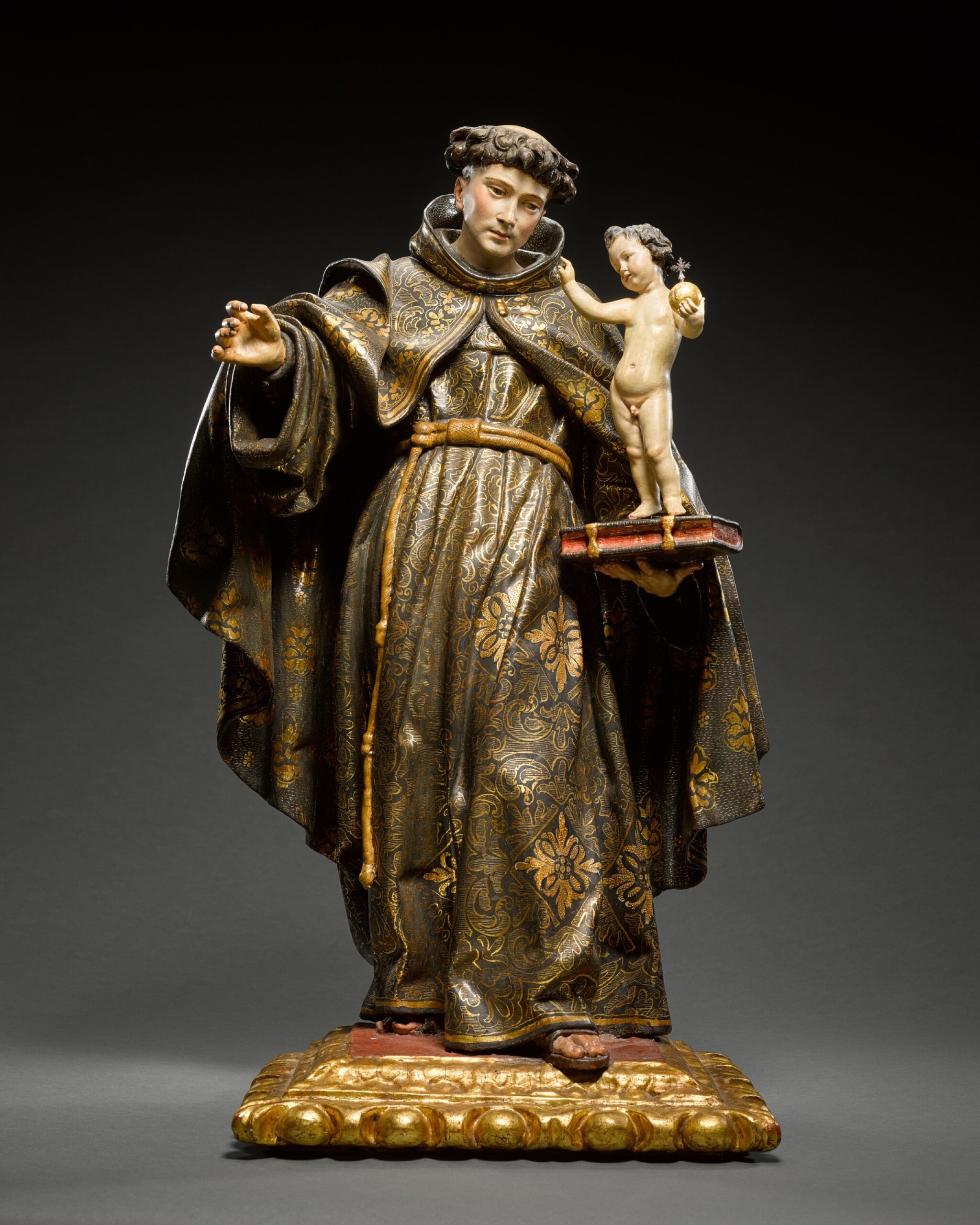 Overall the condition of the sculpture is very good with minor dirt and wear to the surface consistent with age. The Christ Child is carved separately and is probably original. The Saint was professionally cleaned and an uncleaned patch is visible on a fold of drapery at the back. The polychromy and gilding are in excellent near-original condition; very well preserved with few visible losses. One or two minor losses to the paint in the hair and cloak. The Christ Child was not cleaned and dirt is visible to the surface. The halo is removable; minor oxidation to the metal. There is some minor stable splitting to the wood visible to the reverse. There are some slightly open joints visible where the feet and costume meet the probably original base. Some wear to the gilding on the base revealing reddish undertones.

This exceptional figure of Saint Anthony of Padua can be convincingly attributed to Pedro Roldán, who was one of the foremost Baroque sculptors active in Seville in the second half of the 17th century. The sculpture is remarkable for the beautifully preserved gold estofado, which finds close parallels within Roldán's autograph oeuvre. The goldwork, which is in near-original condition, is characterised by swirling arabesques filled with gilt striations, and stippled palmette motifs; the underside of the hood and the sleeves are treated with a more restrained dotted decoration.

The Saint Anthony finds a close comparable, compositionally, but, in particular, in the estofado, with the Saint Ignatius Loyola by Roldán in the Museo Nacional Colegio de San Gregorio, the Spanish National Museum of Sculpture in Valladolid (inv. no. CE1126). The Saint Ignatius, which is larger than the present sculpture, standing at 110cm, has closely comparable estofado (similarly set against a black ground, although, as in the present work, this appears dark green today), whilst the delicate facial features with those of the Saint Anthony. Both the Saint Anthony and the Saint Ignatius Loyola find further comparisons in two figures of the Jesuit SS Francis Xavier and Francis Borgia which were presented in the 2009 Matthiesen Fine Art exhibition, The Mystery of Faith (op. cit., no. 14).

Pedro Roldán was one of the finest 17th-century Sevillian sculptors. His four children all became sculptors, including his daughter Luisa Roldán, La Roldána, who is celebrated as one of the great female Spanish sculptors; see her Saint Ginés de la Jara in the J. Paul Getty Museum, Los Angeles (inv. no. 85.SD.161). Pedro Roldán initially worked for Alonso de Mena in Granada between 1638 and 1646, before moving to Seville where he established himself as the foremost sculptor in the city, teaching at the Academia de Arte between 1662 to 1672. His most famous works are the St Joseph, 1664, in Seville Cathedral, as well as several retable groups: the Descent from the Cross intended for the Convent of S. Francisco, Seville (now Seville Cathedral), and the Entombment, 1670-1672, in the church of the Hospital de la Caridad, Seville. In most of these works he collaborated with the painter Valdés Leal, who completed the polychromy. Roldán's most iconic work is, however, the extraordinary Ferdinand III, commissioned in 1671 for Seville Cathedral ahead of the sitter's canonization.