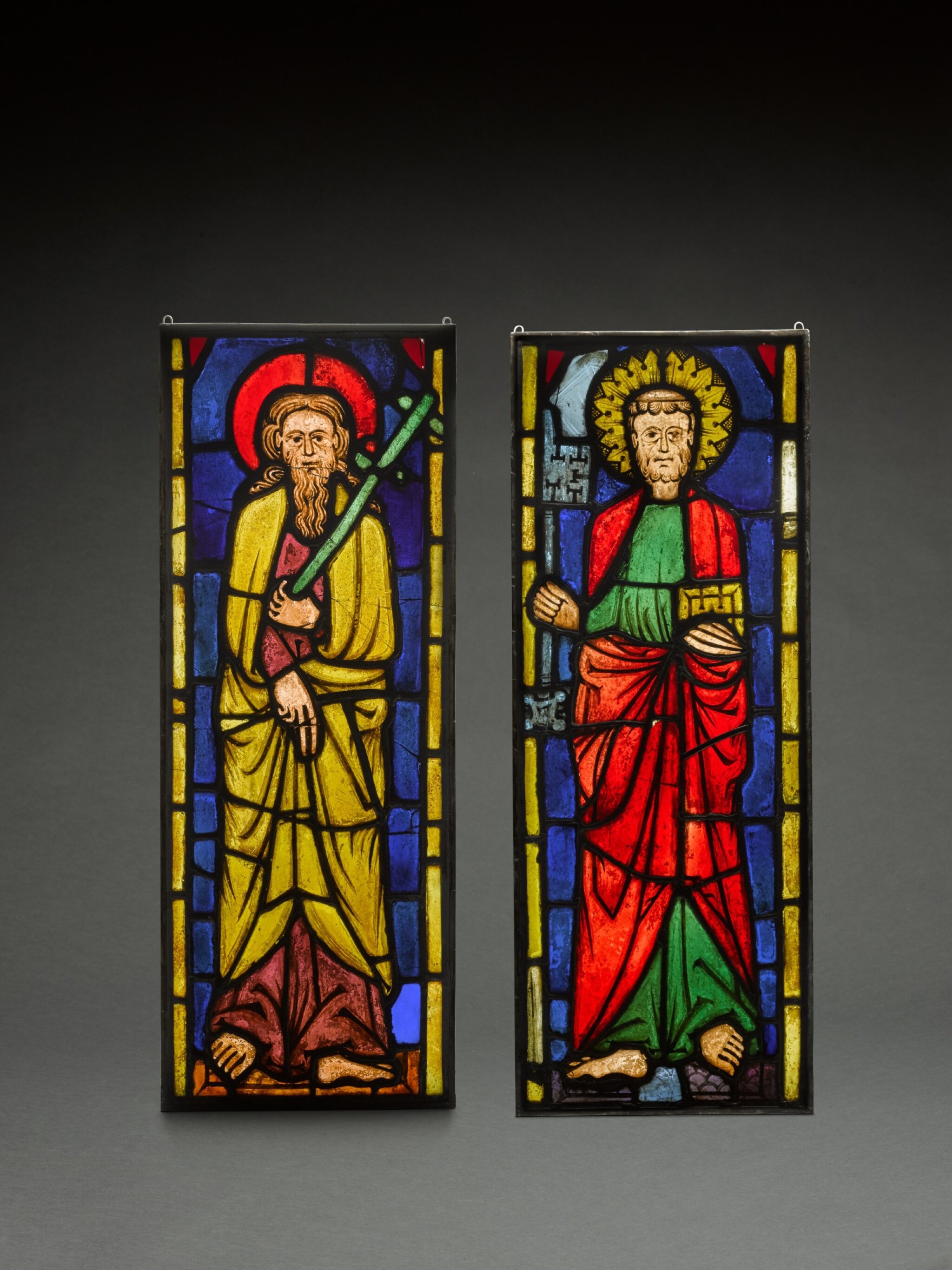 The following condition report is based on the report prepared by Dr Heather Gilderdale Scott, which is available upon request.

The panels appear to be comprised very predominantly of medieval glass.

The panels are currently in a generally very good condition. The leads (modern, but not brand new) are firm; the glass has relatively few cracks (some repaired); and pitting and deposits are light.

The plain, slender yellow glass borders are not a typical feature of glass of this date and origin, and may represent patching (with medieval glass) of an area commonly disturbed when panels are removed from their original contexts. There are a few modern glass patches, including to the blue ground of Saint Philip. There appears also to be painting, throughout, on the reverse of some pieces to reinforce the original painted detail. There are also possible patches of overpainting to the front of a small number of pieces.

Together with the preceding lot, these characterful panels depicting Saint Peter and Saint Philip form a valuable and largely original testament to the art of stained glass in medieval Germany. Saint Peter is represented with a short curling beard holding the key and a book, while Saint Philip is identified through his attribute of the double cross. Probably once part of a larger set of panels depicting the Twelve Apostles, the figures are marked by a fine rendering of their hair and beards and the folds of their drapery. In their frontal depiction, the apostles may be compared to a panel with Christ as Salvator Mundi from Kirchberg in Lower Austria, circa 1310, now in the Hessisches Landesmuseum, Darmstadt (op. cit., no. 66).

Although it is uncertain whether they originate from this church, the panels were certainly housed in the Schlosskirche at Wechselburg before 1928. The monastery of Wechselburg (Zschillen) in Saxony was founded in about 1168 by Dedo von Rochlitz-Groitzsch. As a result of an exchange of territory following its dissolution in 1534, the monastery came into the possession of the Counts of Schönburg, one of the oldest aristocratic families in Europe. Converted into a castle complex in the following centuries, the late Romanesque church with its famous rood screen and triumphal cross group underwent little change until the 19th century. With the conversion of the line of Schönburg-Forderglauchau-Wechselburg to Catholicism in 1869, extensive building work took place between 1871 and 1884, during which the interior of the church was decorated in a historicist style. The present panels are recorded to have been on display in the Schlosskirche before 1928, when it was open to visitors as a church museum. While a Saxon origin of the glass has not been proven, it is possible that they were incorporated into the windows of the Wechselburg Schlosskirche before its remodelling in the late 19th century. Substantially damaged during World War II, the Schlosskirche was restored again from the 1950s. Having attained the rank of a minor basilica, Wechselburg is now home to a Benedictine monastery and is a site of pilgrimage.

The present lot is the subject of a report by Dr Heather Gilderdale Scott, which is available from the department upon request.

Sotheby’s is also grateful to Dr Markus Mock for his helpful comments based on photographs of the panels.