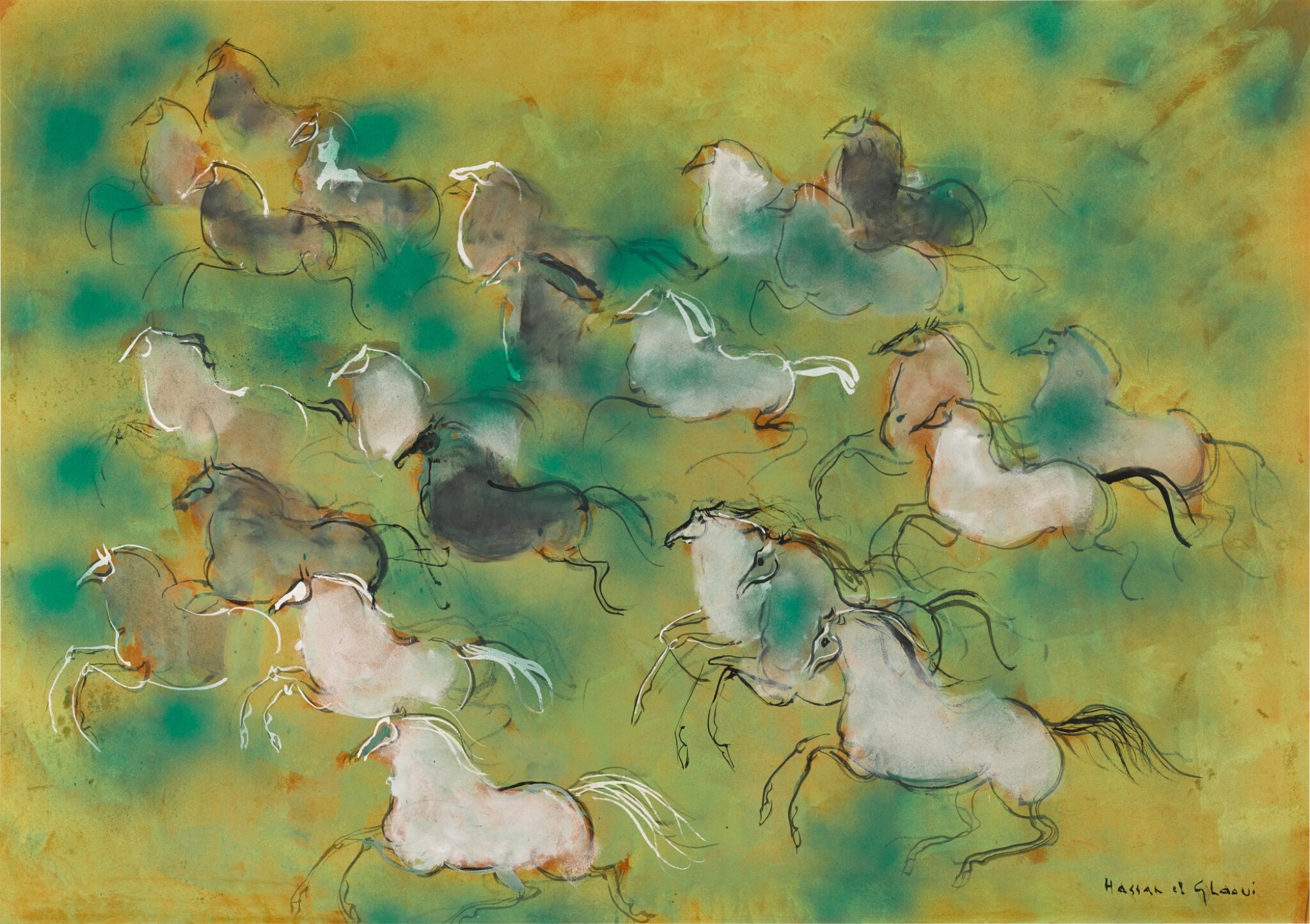 Light wear or handling marks to the corners of the work. There is a small area of loss to the board along the upper left hand edge. Other possible instances of this elsewhere, however all are hidden by frame. Light surface scratches within the upper left hand quadrant, as well as in a handful of other places. There is a dark grey delineation line running parallel to all four edges. the reverse of the work shows an abnormality in the board which appears inherent as well as abrasions scattered along the edges indicating that nails, which where used previously to hold the work in the frame, have been removed. Inspection under UV light reveals no clear signs of restoration or repair. Overall, the work appears to be in good condition. Unframed.

Private Collection, Morocco, 1970 (gifted from the above)

Hassan El Glaoui was born in 1924 to the last Pasha of Marrakech, Thami El Glaoui. Known as ‘The Lord of the Atlas’, Thami El Glaoui received official delegations from across the world, impressing his guests with extravagant banquets complete with Moroccan dancers and musicians. Amongst his many visitors was British Statesman Sir Winston Churchill, who visited Morocco for the first time in the winter of 1935. The two statesmen became fast friends and remained close until the Pasha’s passing in 1956. Churchill’s travels to Morocco resulted in him crossing paths with Thami’s son, the young Hassan El Glaoui. Impressed by his talent, Churchill convinced Hassan’s father to allow him to pursue a career in the arts.

At the age of ten, Hassan El Glaoui’s father gifted him a pony; the Pasha often rode horses into war. This gave rise to Hassan El Glaoui’s passion for horses, a feature that is prominent in his figurative works. His focus on painting horses, particularly portraying the bond between a horse and its rider, was developed further upon the artist’s return to Morocco in 1965. Painting Moroccan traditions, both old and new, was very important for Hassan El Glaoui. Despite El Glaoui spending much of his formative years studying and practicing in Paris, the artist’s subject matter was deeply rooted in his homeland of Morocco.

Hassan El Glaoui’s works have been exhibited extensively across the globe, notably at Gallerie André Weill, Paris (1950), Wildenstain, New York (1951), Galerie Petrides, Paris (1959), Hammer Galleries, New York (1967, 1969), Galerie Isy Brachot, Brussels (1969) and Tyron Gallery, London (1969), amongst others. His works are included in numerous prestigious collections such as the Royal Palace Collection in Fez and the Parliament Collection in Rabat. Throughout his long career, Hassan El Glaoui received international praise and is widely celebrated as one of Morocco’s most revered artists and a pioneer of contemporary art.