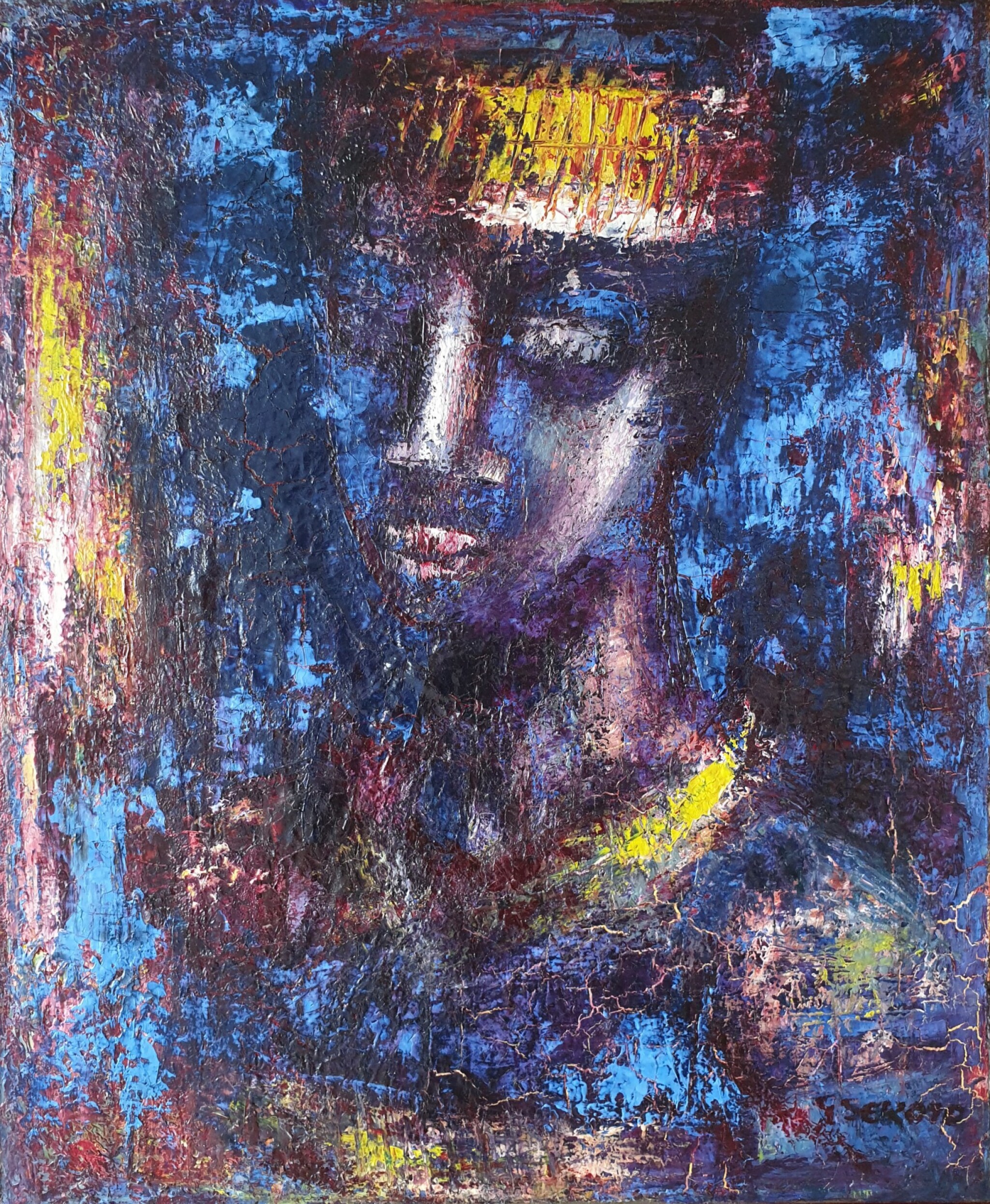 The canvas appears original and unlined. The work is stretched, with its frame attached to a backboard. Please note, the work exhibits networks of craquelure throughout, however these appear stable. Examination under UV light exhibits areas of possible light retouching. Examples of this includes within the area above the figures right shoulder, and to the lower right-hand framing edge. Minor other examples elsewhere.Overall, this work is in good and stable condition.

"Your large painting of an African head hanging on the wall opposite me. A young woman's. The most precious of my art collection .... Yes, this African maid you painted. Tonight, as so often, she seems to take on a different life .... And tonight the sounds I hear from my stereo help paint the mood. You must remember, of course, the blue that is dominant in your painting, varied by patches of white, toned down by dim artificial light in my living room… Big eyes, big lips, firm, youthful jaws, a handkerchief casually but elegantly worn, a stylised straight neck, a collarbone pulling with a horizontal tension ... Your African maid still does not flinch. Never will. And she continues to stare obliquely out of the wall, now part of the scene, now aloof from it." (Es'kia Mphahlele, Afrika My Music, 1984, pp. 60-1)

In 1947 Sekoto left South Africa in exile for Paris and never returned, the rest of his life running tragically in parallel to the apartheid regime. Sekoto was frequently short of money, and would often settle his outstanding bills with paintings. Jean Falliès was a Parisian dental surgeon who treated many artists, including Sekoto, and the present lot was one such work received in lieu of payment. In fact, while struggling to establish himself as an artist in the early Paris years, Sekoto made ends meet as a jazz musician instead, making him the first of many South African jazz exiles that followed, including Hugh Masekela and Miriam Makeba. Sekoto’s Blue Head series, which dominates his output in the 1960s, is thought to originate in a small 1960 ballpoint sketch inscribed ‘Inspiration - Mariam Makeba’. The rising international star Makeba had been profiled by Time Magazine on 1 February that year, and was in New York City recording her first solo album when the Sharpeville Massacre took place on 21 March and she learned her South African passport had been cancelled; thus began a period of political activism and exile that lasted until the release of Nelson Mandela in 1990.