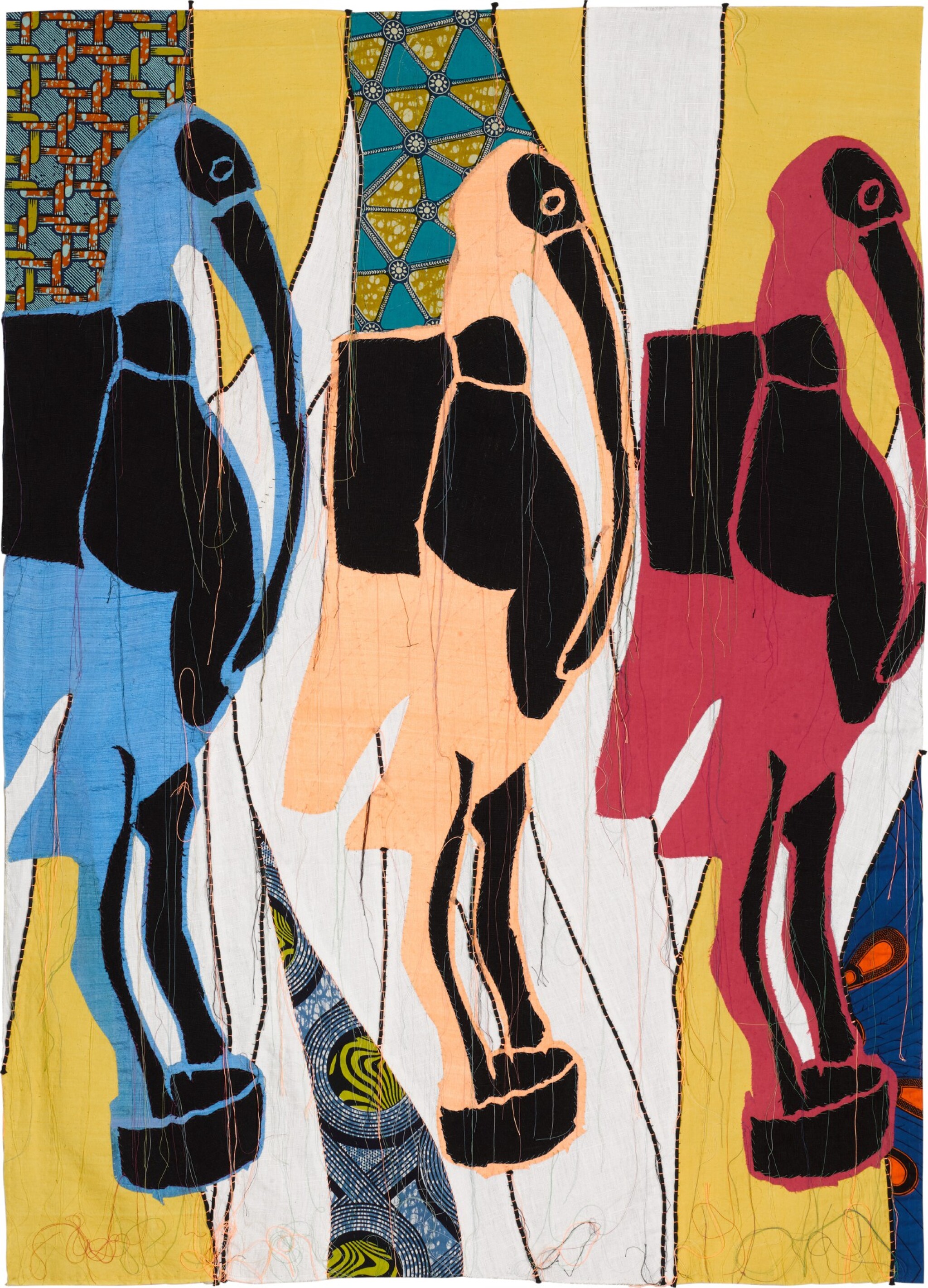 The textile is floating in the frame with the help of hinges on the reverse. The work is in very good condition.

"I remember long conversations with Bisi about her ambitions to transform the visual arts scene in Nigeria, while in London before her final return to Nigeria. I watched as Bisi, a resolute, feminist, intellectual, and visionary, single-handedly transformed the African landscape of contemporary art - from her international curatorial work to publishing and most importantly, her Asiko residency programme.

"After a period of thirty years in Europe, Bisi planted the seed of inspiration in me that a re-engagement with Africa might be a possibility. Her invitation to do talks in Lagos inspired me to create Guest Artists Space Foundation in Lagos, which we opened in February 2022. Our work will be a lasting legacy to her inspiration. We shall continue to expand the vision she inspired."

Combining Dutch wax (batik) printed cotton with embroidery and patchwork, in his Modern Magic series Shonibare responds to the African objects that were in the collection of Pablo Picasso. Playfully describing this body of work as “Picasso in reverse... cultural appropriation is a two-way thing", Shonibare draws a parallel between his practice and that of Picasso, in that he adopted various European art forms, just as Picasso adopted from West African cultures. As Shonibare explains, “Picasso was interested in appropriating from another culture, and I also appropriate from European ethnic art".

In 1907, Picasso supposedly became obsessed with an African sculpture Matisse had just bought; within days he visited the Trocadero Museum of Ethnology, now the Musée de l’Homme, later recalling “I forced myself to stay, to examine these masks, all those objects that people had created with a sacred and magical purpose, to serve as intermediaries between them and the unknown and hostile forces that surrounded them, thereby trying to overcome their fears, giving them colour and shape. And then I understood what the painting really meant. It is not an aesthetic process, it is a form of magic that stands between us and the hostile universe, a means of taking power, imposing a form on our terrors as well as our wishes. The day I understood that, I found my way”.

This experience immediately led Picasso to repaint Les Demoiselles d’Avignon, giving three of the figures depicted “African” masks that set them free from all previous western artistic values and rewrote the rule book about what an image can be. Picasso's 'African period' lasted only two years (1907-1909), but during this time he became an avid collector of African art, including the Senufo bird (séjén) sculpture from Côte d'Ivoire depicted in the present lot. These sculptures were carried on the head by novices at the onset of the final phase of initiation into the poro society. Senufo bird figures refer to both the physical and intellectual aspects of life, which together assure the continuation of the community. These motifs serve as didactic tools, referring the initiate to the wealth of knowledge embodied by Poro. “When I looked deeper, I saw Picasso was genuinely fascinated by the spiritual power of these objects – it wasn’t just decoration. He went for sculptures that were frightening: half-animal, half-human.”

We are grateful to Shonibare Studio for their assistance in cataloguing this lot.