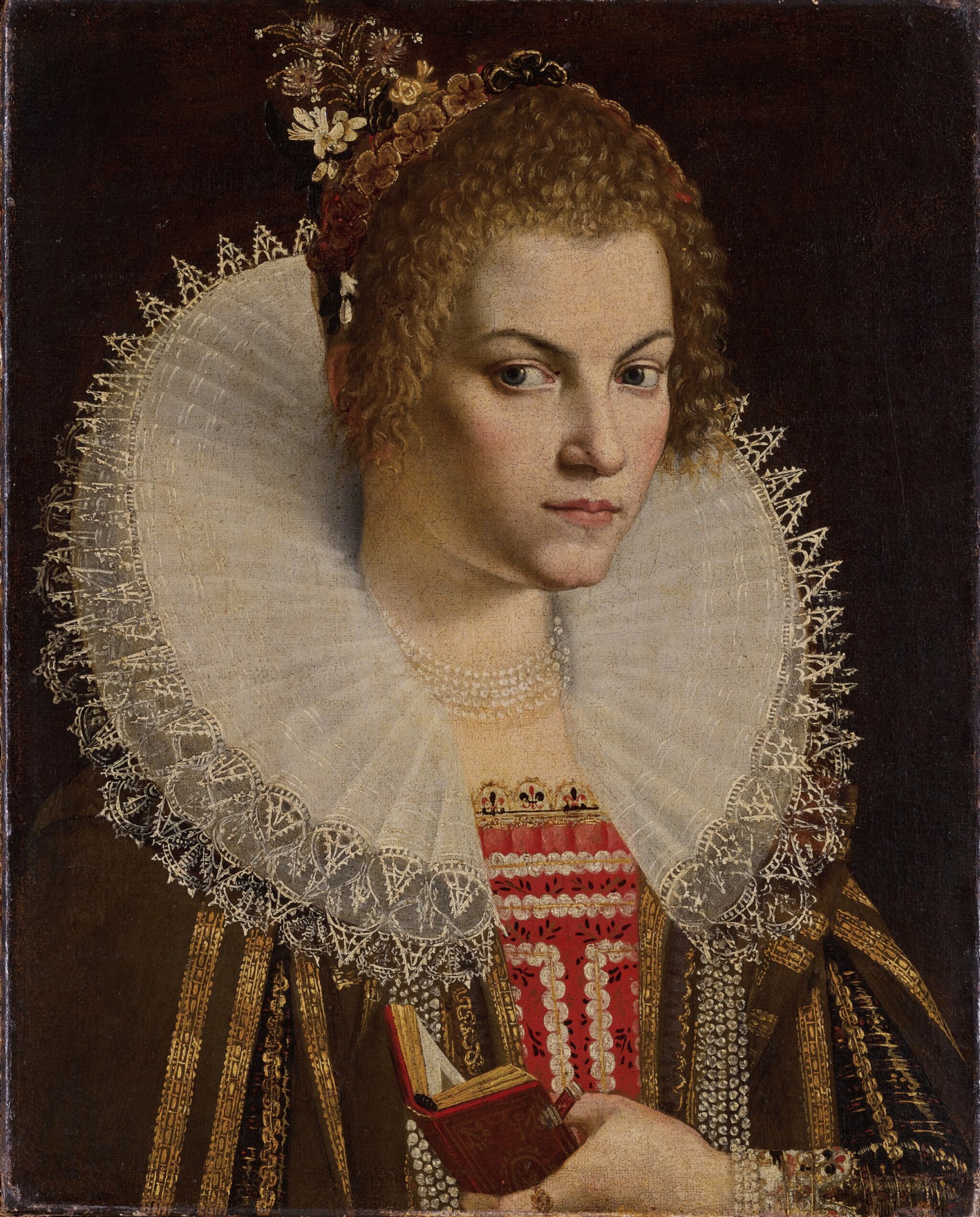 Portrait of a Young Lady Holding a Small Book

This painting is in very good condition overall.

The canvas support has been glue lined and attached to a four-member bridle joint stretcher. The lining is dry and stiff, and the painting is planar. The weave of the canvas is pressed forward a bit by the lining. The painted surface extends around the sides of the stretcher on the right and left, although it is unclear whether or not this is a continuation of the composition. By comparison, the top and bottom edges of both the paint layers and primary canvas end at the turnover edge.

The paint layers appear to be in a good state of preservation. The impasto of the lacy edges of the collar remains visible, the smooth shading in the flesh appears intact, and the fluid brushwork in the gold embroidery is unbroken. Although a strongly fluorescing varnish impedes definitely confirming the presence of restoration with UV, there seems to be an irregularly shaped restored loss in the forehead and a few meandering lines of retouching across the cheeks. Retouching in the hand addresses small losses and wear or increased transparency along the crown of the weave. Small dots of restoration are found in the red garment. There may be general toning glazes in the background and/or further retouching beneath the varnish.

Cleaning to remove the aged varnish is expected to have a noticeable positive impact on the already visually arresting painting. Reversing the lining could be considered at the same time.

From whom acquired by a private collector;

By whom deaccessioned and sold, Los Angeles, Sotheby Parke Bernet, 6 November 1978, lot 4 (as Florentine School, circa 1600);

This alluring and attractive portrait was probably painted by an artist working in Rome around the turn of the sixteenth century in the orbit of the young Caravaggio. As is not uncommon for portraits produced in Italy at this time, the elegant painting (which has been published only once) cannot yet be securely attributed to a specific artist. However, the work’s quality—particularly evident in the facial modeling and precision of expression—is undeniable.

The work’s refined beauty and the sitter’s lavish gold-embroidered dress, white ruff, and pearl accessories certainly owe a debt to Florentine court portraiture. Yet the woman’s penetrating gaze, rendered with psychological intensity, possesses greater affinities with paintings produced by artists working in Rome around 1600. The face’s naturalistic treatment, achieved through subtle gradations of light and shade, speaks to Caravaggio’s influence on the portrait’s creator.

Portraits produced at this date remain difficult to attribute with certainty and this work was long connected with Justus Sustermans. Both Franco Moro and Yuri Primarosa independently suggested that the painting shows stylistic affinities with a very young Orazio Gentileschi, active in Rome already at the end of the sixteenth century. Other names that have been associated with the portrait include Giovanni Baglione, Ottavio Leoni, and Scipione Pulzone. The difference in handling between the sitter’s refined visage and sumptuous attire, in fact, suggests the painting may have been a collaborative endeavor.

The portrait’s provenance is also noteworthy. Its first known owner was Sir Charles Henfrey, a British engineer and Old Master paintings enthusiast; his collection included Moretto da Brescia’s Portrait of Court Fortunato Martinengo (London, National Gallery, inv. no. NG 299), among other works now in museums. The Scottish-born Henfrey lived in India (founding the Eastern Bengal Railway Company) and later in Italy (establishing the Victoria Mining Company), where he entertained members of the European and British elite in his neo-gothic home, Villa Clara (now Villa Branca) on Lago Maggiore in Baveno. Indeed, Queen Victoria and her daughter Beatrice visited for a month in the spring of 1879. As a token of gratitude for Henfrey’s hospitality, Victoria gave him a still life that she painted.1 Following Henfrey’s death in 1891, the painting passed through the hands of several London dealers. The oil tycoon and discerning collector, J. Paul Getty, acquired it at Sotheby’s, London, in 1961. Ten years later, he bequeathed it to his eponymous museum; thereafter it was purchased by the current owner.