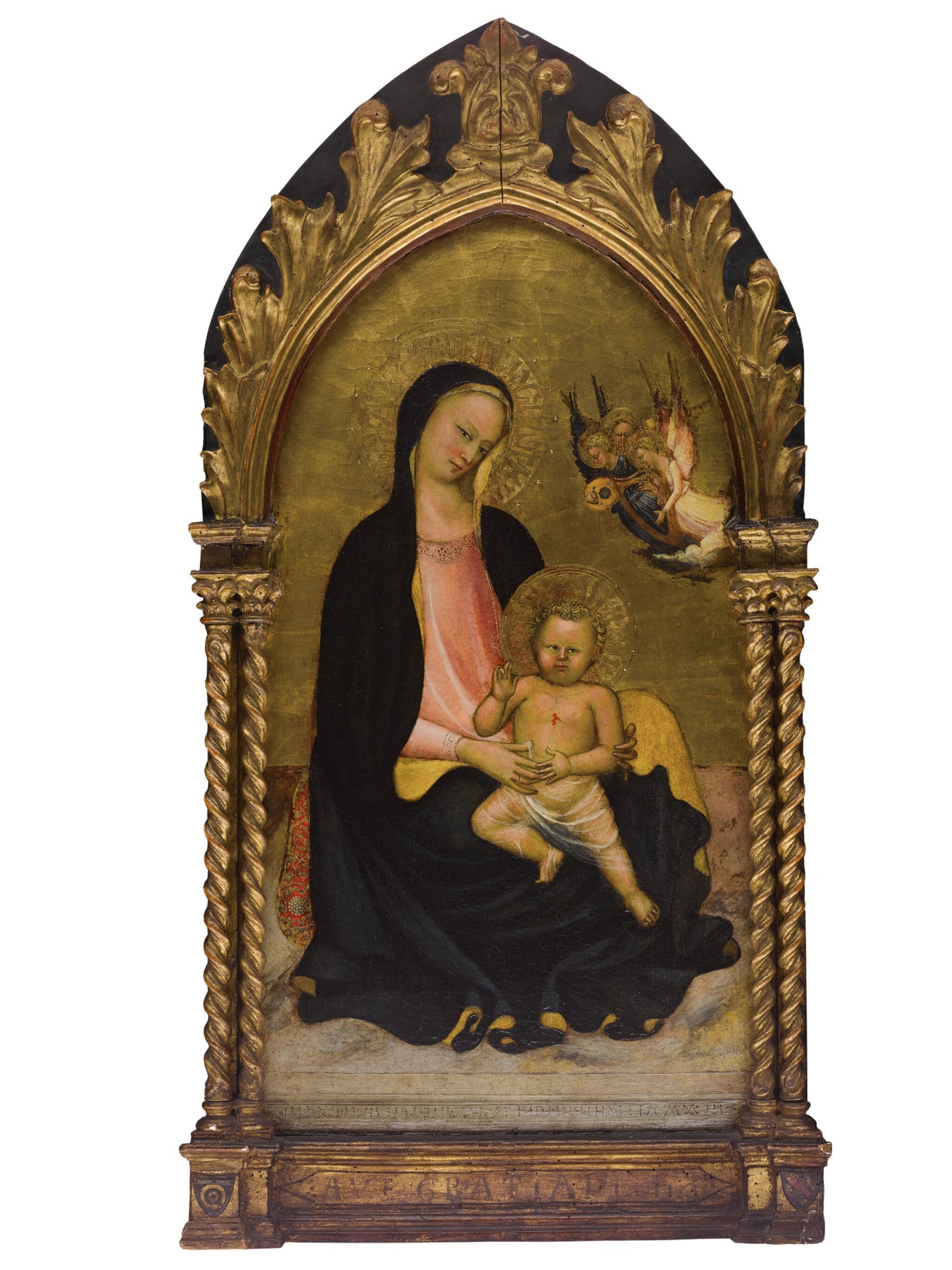 This panel is in sound condition and presents nicely. The group of musical angels is in very good condition overall, with only a few tiny retouches. Retouches address scattered minute losses in the two central figures; wear to some of the mid-tones in the modeling of the flesh has been left alone, only noticeable under close inspection. Some contours have been reinforced to improve readability. The majority of Mary's blue mantle displays a strong fluorescence under ultraviolet illumination, but with very strong normal light more than one campaign of broad restoration is visible. A portion of the blue mantle to the right of the child and the region between the child's legs show extensive retouching atop the fluorescing coating. Much of the ground appears to be re-gilt. The varnish is clear and evenly glossy. This painting may hang in its current state.

﻿NOTWITHSTANDING THIS ONLINE CONDITION REPORT OR ANY DISCUSSIONS CONCERNING A LOT, ALL LOTS ARE OFFERED AND SOLD "AS IS" IN ACCORDANCE WITH THE CONDITIONS OF SALE/BUSINESS APPLICABLE TO THE RESPECTIVE SALE.

Please note there is a Guarantee and an Irrevocable Bid on this lot.
Achillito Chiesa, Milan, until 1927;
His sale, New York, American Art Association, 23 November 1927, lot 121 (as Florentine 14th-15th century; for $900);
There acquired with funds from the James H. Madison Fund for the Fine Arts Academy, Buffalo (thereafter Albright Art Gallery).

Since the early twentieth century, a stylistically uniform group of paintings has been attributed, by Offner and others, to the anonymous Master of the Griggs Crucifixion, a name derived from the altarpiece at the Metropolitan Museum, New York. The artist was identified with the discovery of a 1423 document recording payment to Giovanni Francesco Toscani for a pair of frescoes clearly belonging to the same oeuvre in the Ardinghelli chapel in Santa Trinità, Florence. Toscani’s primary influence was the sculptor Lorenzo Ghiberti, but he also worked in the International Gothic style and is therefore close to Arcangelo di Cola da Camerino and Rossello di Jacopo Franchi. Offner noted Toscani’s “raw, vigorous personality” and listed his defining characteristics as pale green and pink flesh tones, uniform curly blonde hair, tight mouths, and the nimbus-shaped halo with a pattern resembling Kufic script against a cross-hatched ground.1 All of these features are on display in the Albright-Knox panel, in addition to the charming iconographic additions of the trio of musician angels floating at upper right and the coral necklace worn by the infant Christ, intended as both a protective amulet and possibly a teething toy.

The Madonna is seated on the ground in a position of humility, with an elaborately brocaded red cushion just visible behind her. She holds Jesus on her lap, who sits up and faces the viewer, offering a blessing gesture. His delicate necklace with a red coral pendant was a typical accessory for young children in the Renaissance as it was believed to offer protection. Coral, which is durable but yields slightly to pressure, also served as teething material for babies in this period, though certainly not today. At the upper right a trio of diminutive angels floats toward the Madonna on a cloud, playing, respectively from left, a lute, pipes, and a harp. The angels share the same elongated eyes, tight-lipped mouths and blonde curly hair as the Holy Family and their faces are modeled with the same light green tones in the shadows.