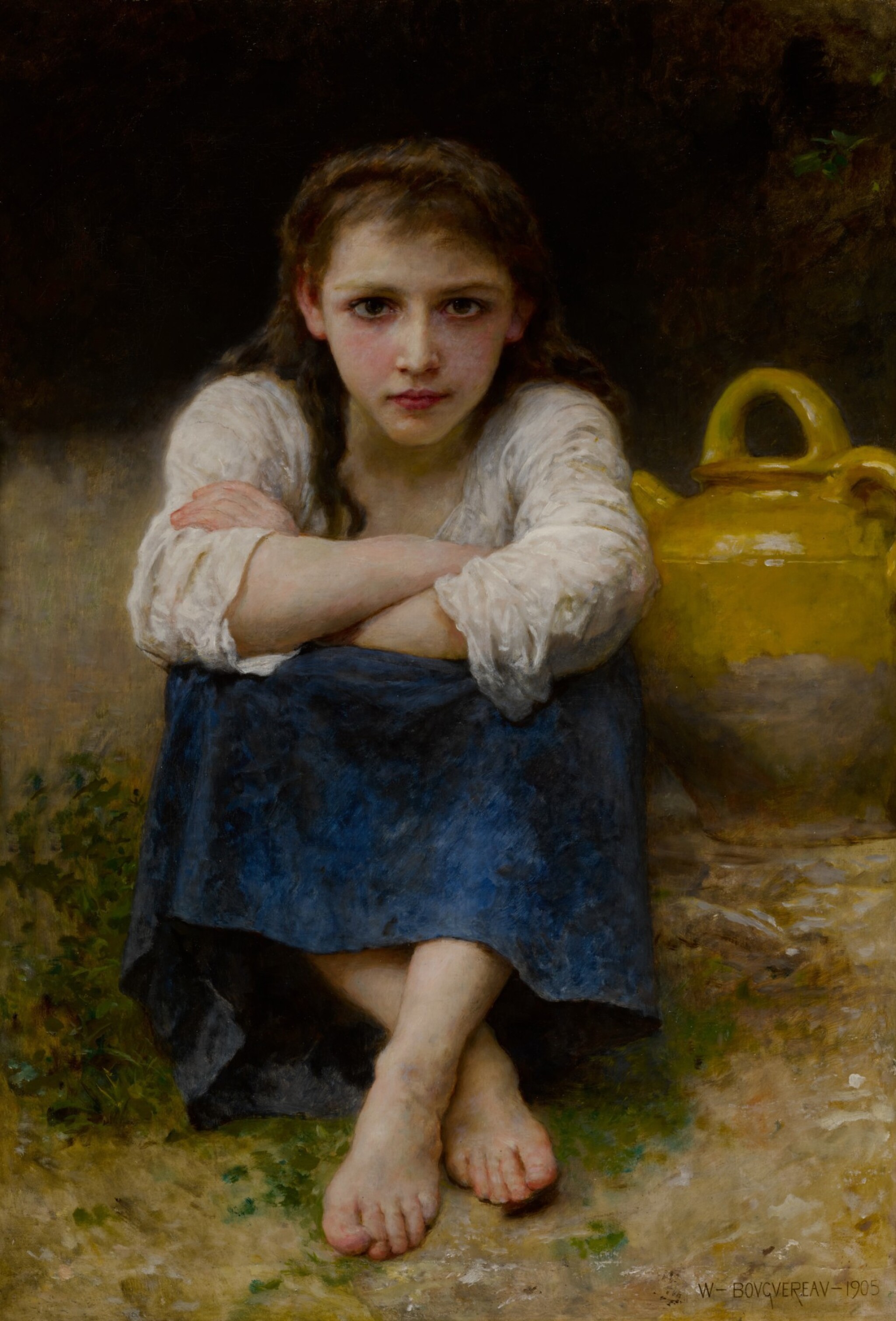 The following condition report has been provided by Simon Parkes Conservation, Inc. This work is in beautiful condition. The canvas has an old glue lining. The cracking is very slightly raised in the upper left, but the paint layer is stable. The painting is clean and varnished. Under ultraviolet light, retouches can be seen on the bridge of the woman's nose and in one spot in the eye on the left. A few cracks in the base of the spindle have been retouched. The work should be hung in its current state.

Sale, DuMouchelles, Detroit
Acquired from the above by the grandfather of the present owner (March 3, 1942)
Thence by descent

La sérieuse marks an exciting discovery in Bouguereau’s oeuvre; unrecorded until today, this is a new addition to the artist’s catalogue raisonné. It is a perfect illustration of Bouguereau’s best-known and most treasured imagery: young peasant children. Recently rediscovered in a mid-western collection, La sérieuse belongs to a small group of paintings executed by Bouguereau in his final year of life. Acquired in 1942 in a Detroit gallery, the painting has graced the walls of the same collection for almost 80 years.

Eight paintings are recorded as having been painted in 1905 and eight in 1904, a considerable amount of work for an ailing man plagued by atherosclerosis and failing eyesight. Work at the easel was extremely difficult and the pain in his swollen hands made it impossible to hold the brushes for long periods of time. Yet, despite declining health, Bouguereau was painting as avidly as before and only interrupted his work to take short restorative breaks. His active social calendar and activities at the Salon and Fondation Taylor were drastically reduced, except for a lengthy selection session for the 1904 Salon. An attack of bronchitis weakened his constitution in the summer of 1904 from which he never really recovered. Bouguereau’s condition worsened in the course of the year but he continued to paint tirelessly until early July 1905, when he was finally confined to his bed.

The paintings of this final period depict his favorite models from La Rochelle, the sisters Yvonne and Marguerite, captured in idyllic settings, gazing at the viewer with large, serious eyes. In La sérieuse, a young girl is seated near her water jug, signifying her purity on the threshold to womanhood. The solemn expression on her face and the almost daring stare towards the viewer reflect Bouguereau’s contemplative inner state as he prepared for his final journey.

The execution of this work is loose, with quick, free-moving brush strokes largely on the peripheral areas, a technique he began experimenting with around 1900 and which appears to have been borrowed from the Impressionists. Another explanation to this change in technique is Bouguereau’s declining health and his lack of strength in applying his usual, polished craftmanship to each canvas. Félix Belanger allowed us a small glimpse into his teacher’s craft at its apogee:

'His initial painting was broad, with solidly impasto…He never left it in that state. As soon as the piece – which for anyone else would have been finished – began to solidify, he would take his palette knife and with unimaginable skill go over it in every direction, smoothing it out, laminating it, until the layer of paint had acquired the desired transparency and delicacy.' (Bellanger, quoted by Lemassier in ‘Comment peignaient les grand peintres: Bouguereau’. Peintre-Pigments-Vernis, vol. 38, no. 12, December 1962, p. 734)

La sérieuse displays the same carefully crafted composition that Bouguereau painstakingly created for each of his canvases. It was the meticulous search for the composition that posed the most challenging and arduous task to the artist, and once decided and laid out on canvas, the painting proceeded with astonishing speed. La sérieuse was certainly created in Paris from the many sketches that Bouguereau possessed of his young models of La Rochelle, as he was sadly unable to work anymore on his last trip to his home town, where he peacefully passed away on August 19, 1905.

We are grateful to Frederick C. Ross and Kara Lysandra Ross for confirming the authenticity of this work based on first-hand inspection and for including it in the forthcoming third edition of the William Bouguereau catalogue raisonné.