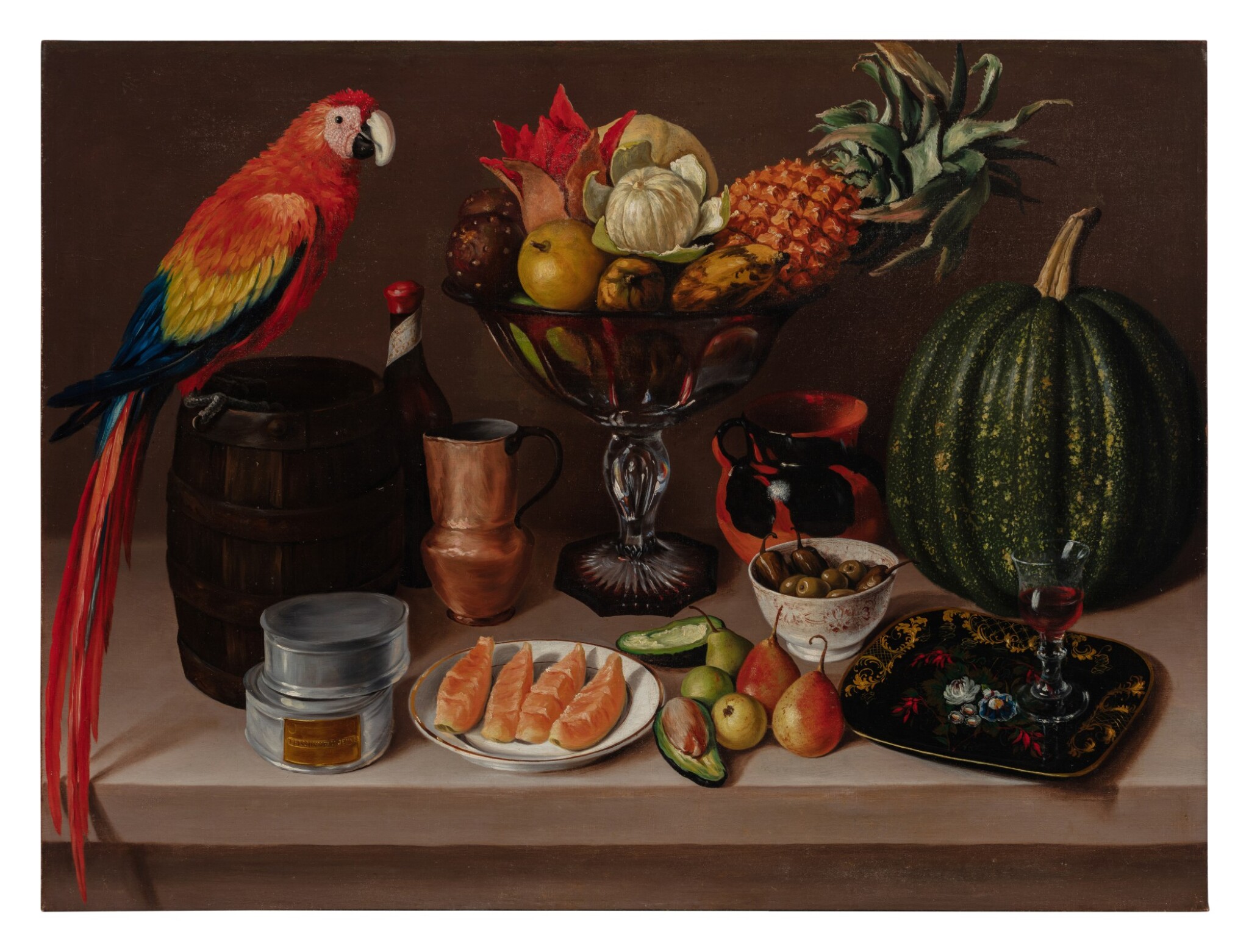 Please note: This painting may be considered an artistic monument of Mexico and, if so, could not be exported without the approval of the Instituto Nacional de Antropología e Historia (INAH). Accordingly, it is offered for sale in New York from the catalogue and will not be available in New York for inspection or delivery. The painting will be released to the purchaser in Mexico in compliance with all local requirements. Prospective buyers may contact Sotheby's representatives in Mexico City and Monterrey for an appointment to view the work.

The following condition report is kindly provided by Carolina Morales:

The painting is in good condition overall. The canvas is lined and there is light craquelure throughout. Small paint losses in the lower left quadrant, notably around the cans, and in the upper left quadrant, around the Guacamaya’s beak. There is a scratch of approximately 7 cm in length at the center left edge. Under UV light, restoration to the left side of the fruit holding crystal cup is visible covering the grouped fruits on its left. Other small interventions are visible throughout and along the upper edge. The work is not framed.

This is one of the most accomplished and vibrant works by Agustín Arrieta (1803-1874) to come to auction in nearly a decade. A native of Tlaxcala, Arrieta emerged from the local European-style art academy in Puebla, a small city not far from Mexico City, and rose to be one of the most outstanding painters of his day outside of the Mexican capital. Celebrated for his mastery across several genres, Arrieta was familiar with European old master paintings by such artists as Diego Velázquez and Bartolomé Esteban Murillo through prints, which he sometimes cited visually in his own religious compositions and portraits. However, he is most known today for his contributions to still life and the specific tradition of costumbrista painting (akin to genre painting but with a proto-anthropological focus on the mixture of cultures and races) that emerged in Mexico in the late colonial period.

Arrieta's still lifes are, alongside his costumbrista paintings, among his most desirable compositions. These still lifes bear a close relationship to the European tradition and could more strictly speaking be referred to as "Dining Tables," as they have a strong affiliation with Flemish vanitas, which were very much in demand by mid century Poblano (Pueblan) collectors and important patrons of Arrieta himself. While they are neither painted in the Spanish manner nor in the inanimate nature of the Italian tradition, these works do allude to the dessert tables and banquets of Northern painters like Frans Snyders (1579-1657). These pictures were largely executed for a local audience of criollo and Spanish aristocrats in New Spain; they celebrate the bounty and diversity of the region and generally feature a mixture of Mexican fine silver, copper and ceramics—highlighting both the skill of local artisans and the wealth of the colony—and indigenous fruits, vegetables, and fauna, such as the vibrant macaw featured here.

Originally painted in sets of 2, 4, 6, 8 and even 12, only one painting in each group was signed. These series correlated to different seasons, religious festivals, harvesting cycles, as well as the values and customs of the region of Puebla-Tlaxcala. By the year 1853, Arrieta had excelled in his craft, painting dining tables with virtuosic technique, notably in the handling of different textures, nuanced chromatic choices, and carefully calibrated of scale and proportion that united natural and man-made materials, from fruits, meats, breads, and sweets to barrels, cups, trays, and plates all of which shared the same compositional space. This extraordinary example is especially notable for the complexity of the composition and the prismatic range of the palette, both qualities prized in Arrieta's best work.