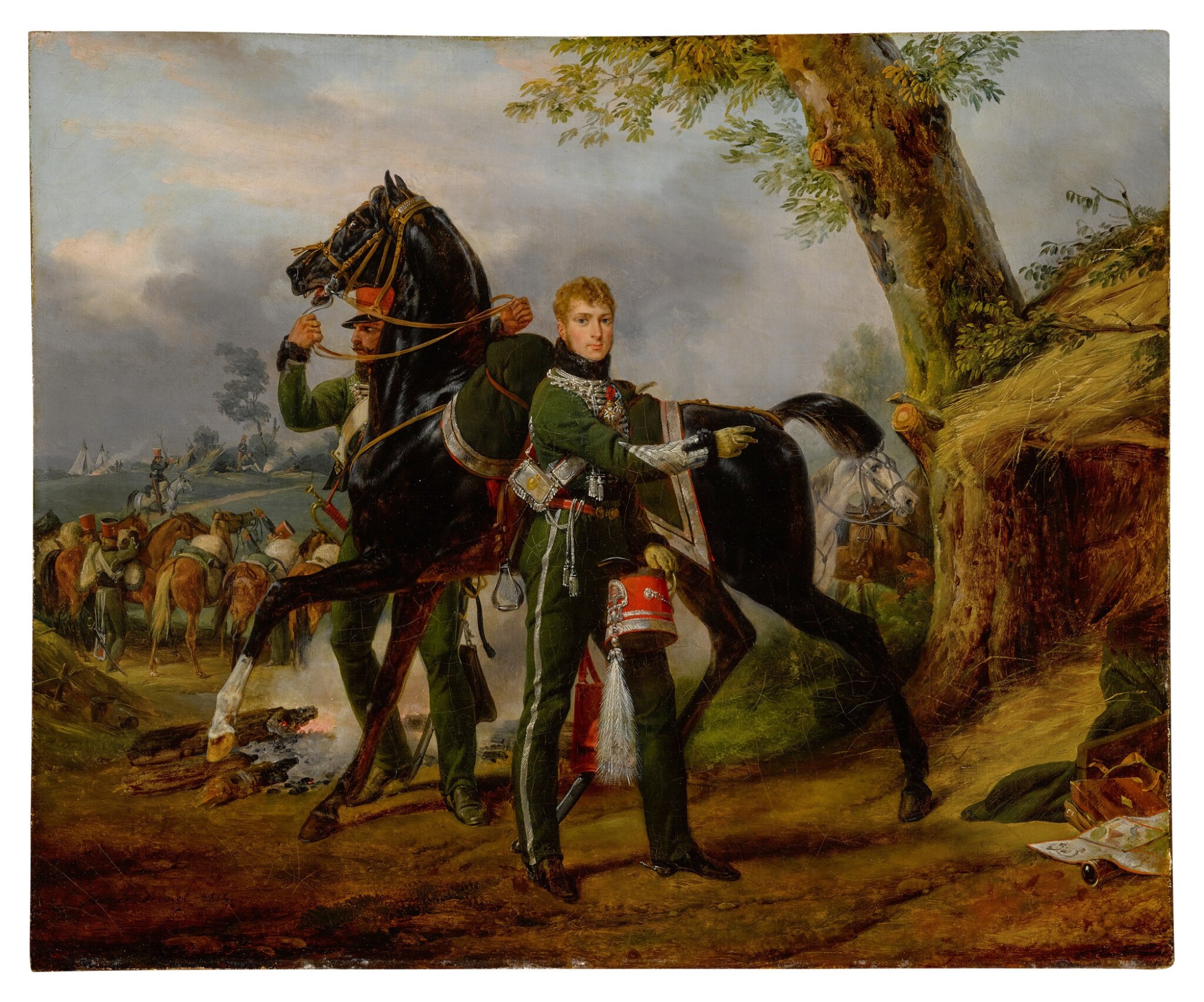 This work is in very good condition and should be hung as is. The canvas has never been removed from its original stretcher. Three tacks holding the original canvas to the stretcher have received small reinforcements on the left side of the top edge. The paint layer is stable. The cracking is slightly raised, which is certainly not disturbing and is to be expected for a work from this period. The painting is clean, but an attractive patina of age still remains on the surface. Retouches are visible when the work is examined under ultraviolet light. The retouches could be reexamined, which would considerably reduce the amount of restoration. At the moment, the retouches are applied in small, isolated spots addressing minor losses and slight thinness in the darkest brown colors. Overall, the work is in very good condition, and could certainly be hung in its current state.

Cesar-René-Marie-Francoise-Rodolphe de Vachon, Count of Belmont-Briançon (1770-1814) was a colonel-major in the 3rd regiment of the Imperial Guards of Honor, a cavalry regiment of Napoleon I. Born into a noble and military family, he took to the battlefields for the French in several cities, including Leipzig, Hanau, and Montmirail, among others. He was fatally wounded, though, on 13 March 1814 at the Battle of Reims, a conflict between Napoleon’s Imperial army and Russian-Prussian troops under the leadership of General Emmanuel de Saint-Priest. Although the French were ultimately victorious, both sides suffered heavy casualties, including Vachon de Belmont-Briançon, who was fatally wounded by a Russian bullet after having been freed by Russian dragoons on the battlefield upon the intervention of François Daguerre. Vachon de Belmont-Briançon’s likeness, however, is posthumously recorded in this striking canvas by Horace Vernet. He stands at the center of the composition in full military regalia, the rich green of his crisp uniform and the red of his cap highlighted against the dark body of his horse behind him. That the two are set against a somewhat more softly rendered battlefield in the background helps to draw attention to their imposing and magnificent figures.

In beautiful condition, this canvas by Emile Jean-Horace Vernet is a testament to his prodigious talents. The grandson of Claude-Joseph Vernet (1714-1789), the leading French landscape painter, and son of Carle-Vernet, Horace Vernet enjoyed great success during his lifetime, receiving important commissions from esteemed patrons, most notably Louis-Philippe, duc d'Orléans, later King of France. During the 1820s, He was made an officer of the Légion d'honneur and a member of the Institut de France, and following his success at the Paris Salon in 1826 and 1827, he was appointed Director of the French Academy in Rome, a position he held until 1835.

Horace Vernet regularly turned towards French military subjects for inspiration in his works, and he specialized often in battle scenes, including the set commissioned by the duc d’Orleans, as well as portraits of soldiers, some of which, like the present, were painted posthumously. Another example that recently appeared on the market is his portrait of Prince Poniatowski, who died on the battlefield on 19 October 1813, and was painted by Vernet in 1816, a year after the present work.1