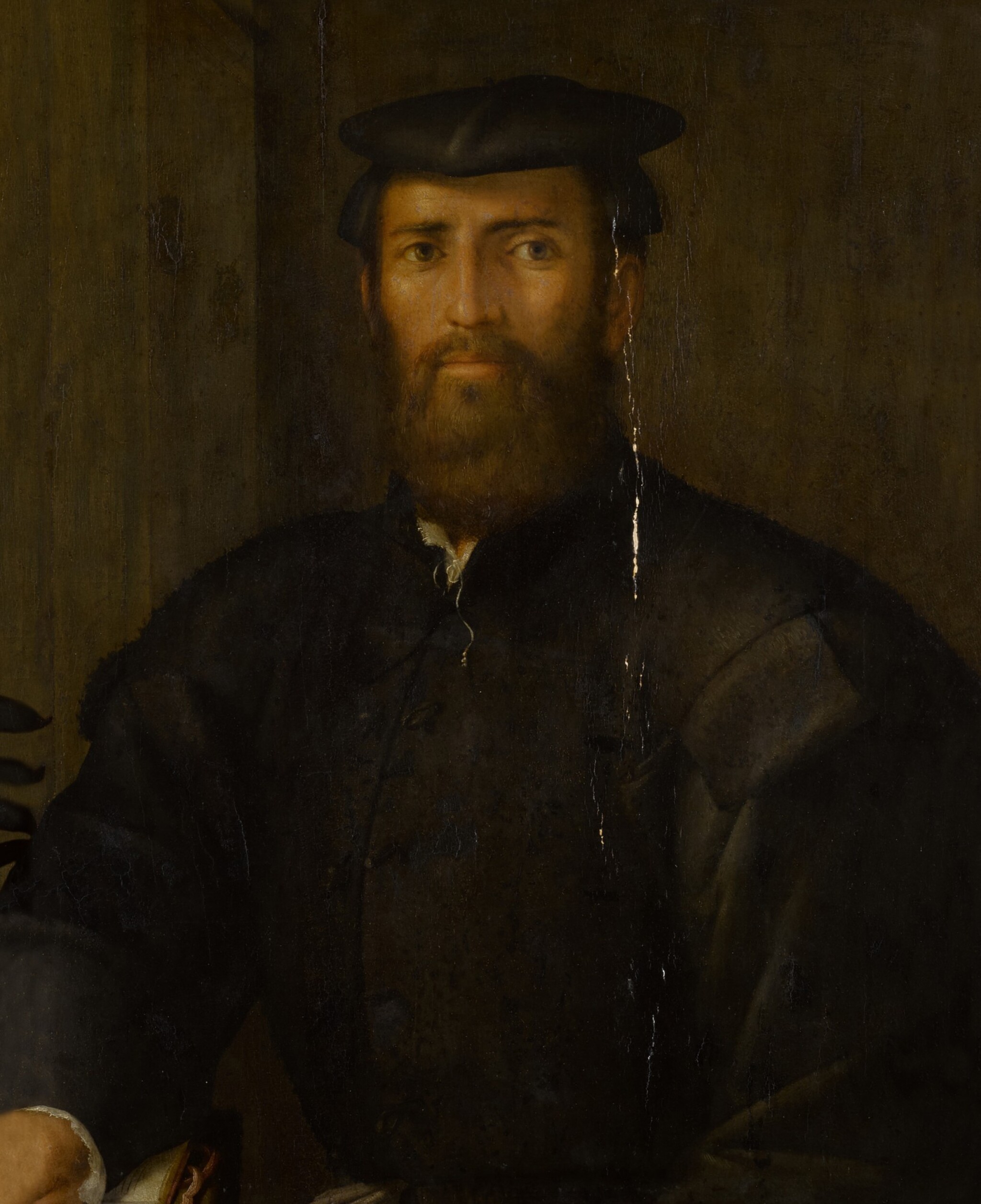 The thick panel consists of possibly two vertical planks. The main join has been reinforced on the reverse with a dovetail insert in the upper right. Two thick braces are adhered horizontally to the reverse. The panel is flat. A previous campaign of restoration is visible along the aforementioned split, however, it is not distracting. There noticeable paint loss and lifting along the sitter's left ear in straight line through his left shoulder. Under UV inspection, various signs of retouching are present, for example, in the top right corner of the background, sleeves of doublet, and cheeks. We recommend contacting an independent restorer to discuss any repairs. Offered in a giltwood and painted carved frame.

Probably, Sir Thomas Gage Saunders Sebright (1802–1864), 8th Baronet Sebright of Besford, Beechwood Park, England;
Thence by descent to Sir Giles Edward Sebright (1896–1954), 13th Baronet Sebright of Besford, Beechwood Park, England;
Thence sold by Christie's, London, 2 July 1937, lot 120 (as by Pontormo);
With Ettore Sestieri, Rome (as by Pontormo).
A. Pinelli, "Pierfrancesco di Jacopo Foschi," in Gazette des Beaux Arts, vol. 69, Paris 1967, p. 99, p. 105, no. 25, reproduced.
Foschi received his training from two influential artists of the Florentine Cinquecento—Andrea del Sarto and Jacopo Pontormo; he worked in the former's studio until his death in 1530, and in 1536 assisted the latter with the fresco decorations (now destroyed) of the loggia of the Villa Medici of Careggi, just outside of Florence.  This portrait, which is datable to the 1530s, reveals the profound influence that both artists, especially Pontormo, had on Foschi's style. It shares with the portraits of Pontormo a deep psychological intensity and sense of intimacy. Highly typical of both Foschi and Pontormo's manner is in the placement of the sitter in the forefront of the picture plane, the sculptural treatment of drapery rendered in sharp, delineated planes, the angularity of the sitter's physiognomy, and the muted palette of blacks, browns and grays, highlighted with dashes of white, as seen here in the book at lower left and the delicate lace collar and ties peeking out of the sitter's jacket. Indeed this Portrait of a Young Man may be compared in concept with Pontormo's 1534 Portrait of Alessandro de Medici, now in the John G. Johnson Collection, Philadelphia Museum of Art, Philadelphia.1 Both portraits depict a young man at work (one drawing, the other writing) in an austere interior, the simplicity of which serves to focus our attention on the psychological state of the sitter.