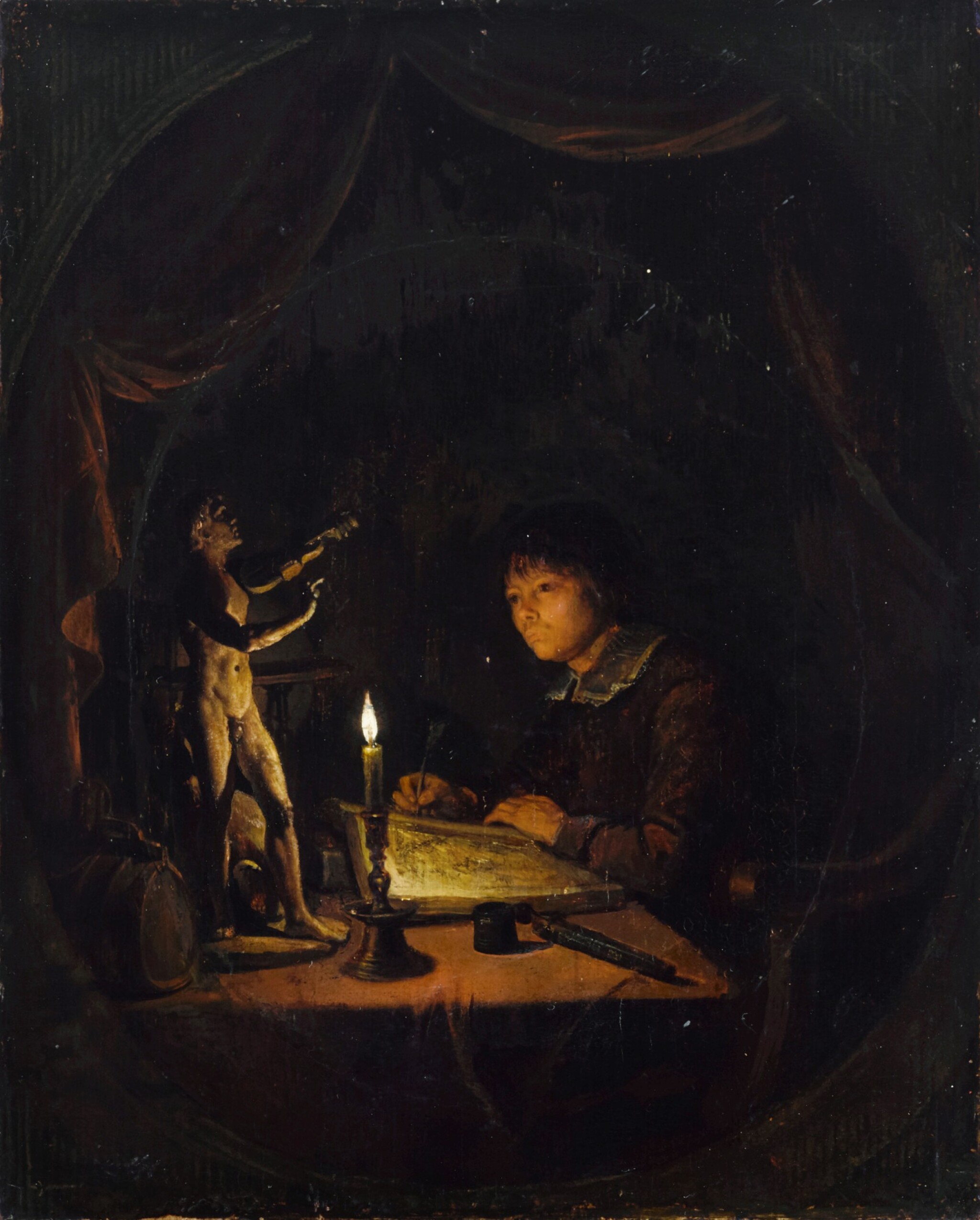 oil on panel, in an incised oval within a painted oval

This diminutive panel with its incised oval containing the central composition is a rediscovered original work by Gerrit Dou and is likely identical to the painting described in the estate sale of Ewout van Dishoek (1678 – 1744) Heer van Domburgh, in 1745. In the soft glow of candlelight, a young man sketches a plaster cast of a statue, possibly Orpheus playing music for Cerberus. The artist or scholar in his studio was a favorite subject of Dou, and was equally popular among erudite patrons as a reminder of the intellect required to produce and appreciate such refined paintings. Showing the young man working well into the night allowed Dou to display his skill with nocturnes and the play of candlelight on the figure’s face and various surfaces, a technique that, according to Samuel van Hoogstraten, “amazed the beholder.”1 The incised oval inside a rectangular composition is unusual, although oval compositions and panels with arched tops are typical of Dou. It is possible that Dou began with the oval and expanded the composition into a rectangle, while the painted spandrels at each corner may be an altogether later addition.

Junko Aono mentioned a copy of this composition painted and sold by Louis De Moni (1698 - 1771), who made a career of imitating his predecessors. In all likelihood, De Moni’s copy was sold as a work by Dou at Dorotheum, Vienna, 14 October 1997, lot 59. The Dorotheum painting is twice the size of the present panel, and lacks an incised oval, suggesting it was made after this work. Compositional differences also exist between the two: in the Dorotheum painting, here assumed to be the De Moni copy, the painted spandrels only appear on top rather than in all four corners, and the red curtain stops shorter than it does in the present lot. De Moni’s copy of Dou’s Young Man Drawing by Candlelight  was advertised as a copy in De Moni’s 13 April 1772 collection sale in Leiden, but nonetheless sold for a relatively high price (108 guilders). The price fetched by the copy reflects the enduring popularity of Dou’s candlelight scenes, which in their original versions sometimes sold for thousands of guilders.

We are grateful to Dr. Ronni Baer for endorsing the attribution to Gerrit Dou after firsthand inspection. Dr. Baer agrees that both the inner and outer ovals are original and that the spandrels are later additions.