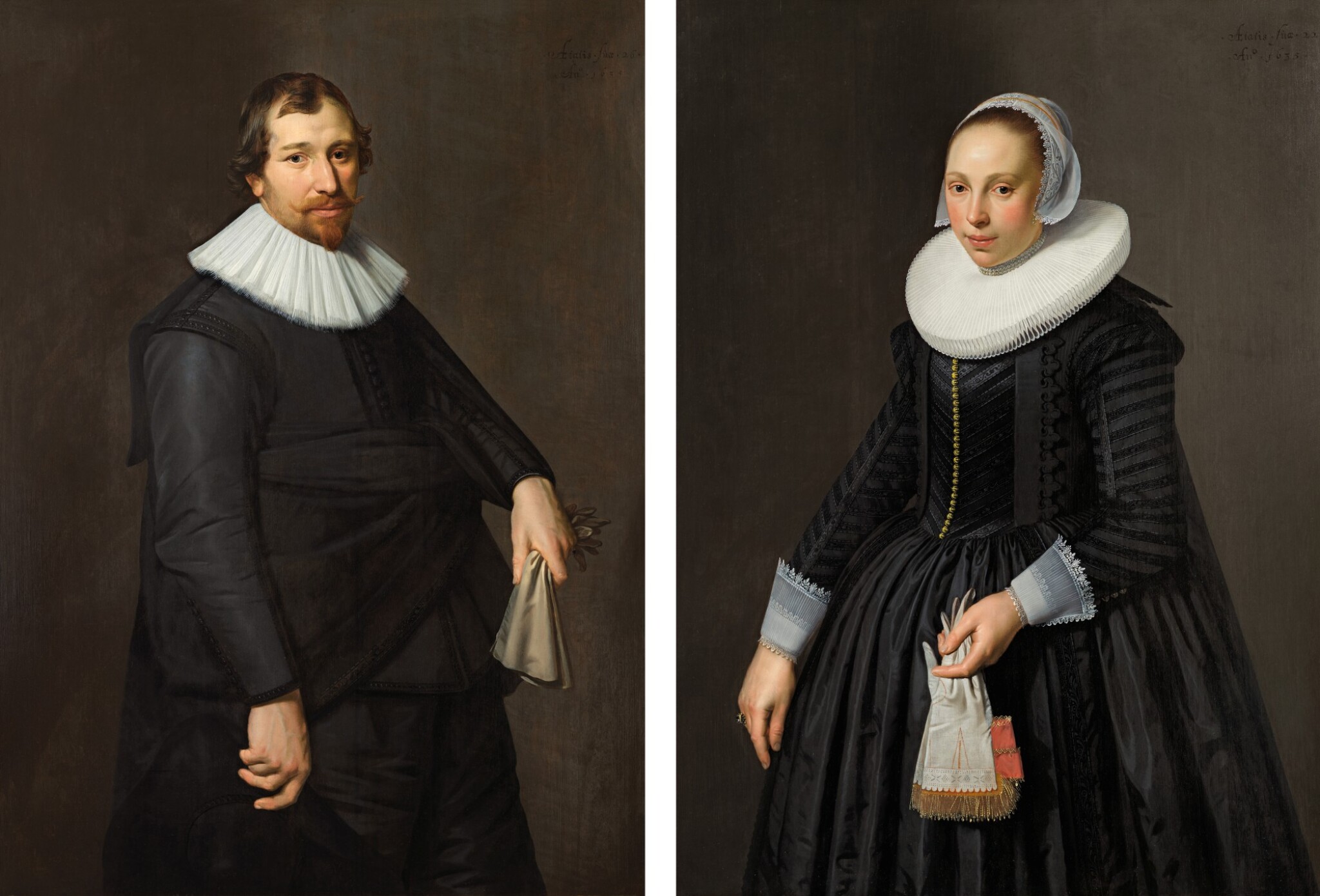 a pair, both oil on panel

In the years just before Rembrandt settled in Amsterdam, Nicolaes Eliasz Pickenoy (1588- 1650/56) was the leading portrait specialist in the city, with Thomas de Keyser as his most important rival. Most probably he studied painting with Cornelis van der Voort (1576-1624), who was the founding father of seventeenth century Amsterdam portraiture and whose influence is clearly visible in Pickenoy’s work. Pickenoy’s style shows the same rather sharp contours as Van der Voort’s, but is a little bit softer thanks to the use of more shadows. His first known work is the Anatomy lesson of Sebastiaen Egbertsz de Vrij of 1619 (Amsterdam Museum), formerly attributed to Thomas de Keyser. During the next twenty-five years the artist made dozens of portraits, including eight official group portraits and many pendant paintings of Amsterdam sitters. His painting style changed little if at all during his career, but he reached the peak of his abilities in the early 1630s. Even after Rembrandt had settled in Amsterdam and developed his more modern style of portraiture, Pickenoy remained very popular among the Amsterdam upper class. Only after 1640 did his popularity apparently began to fade, but he remained active until the mid-1640s. Apart from portraits, he painted a few biblical and mythological scenes. Pickenoy only rarely signed his paintings, but in most of his works his style can be recognized easily.

Among the highlights in his oeuvre are the pendants of a twenty-seven-year-old man and his twenty-one-year-old wife of 1632 (J. Paul Getty Museum, Los Angeles), the portrait of a young woman of 1633 (The Detroit Institute of Arts, Detroit) and the full-length portraits of Cornelis de Graeff and Catharina Hooft of 1636 (Staatliche Museen, Berlin). The present portraits of a twenty-six-year-old man and a twenty-two-year-old woman, painted in 1635, also show his capacities as a portraitist at their best. They are most probably painted shortly after their marriage, but in spite of the inscriptions with their ages, we have no indications to identify the sitters. They surely belonged to the Amsterdam upper class, like all the other sitters of Pickenoy.

The present portraits were sold in Paris in 1967 in an auction that contained among others works of art from the collection of Prince Léon Radziwill (1880-1927), the well-known French society figure of Polish descent, who was a friend of Marcel Proust and is said to have been the model for Robert de Saint-Loup in Proust’s À la Recherche du Temps Perdu. Through his mother Louise Blanc, Radziwill inherited the Casino at Monte Carlo, making him one of the richest men in Europe.

After Radziwill’s death in 1927, the paintings apparently remained in the possession of his widow, who was also his cousin, Princess Dolores Constance Johanna Maria (‘Dolly’) Radziwill (1886-1966). On the reverse of both panels there are owners’ labels inscribed ‘Madame Mogens Tvede’, referencing Dolly’s third husband, the Danish architect and painter Mogens Tvede (1897-1977), making it clear that she most probably kept the paintings until her death.