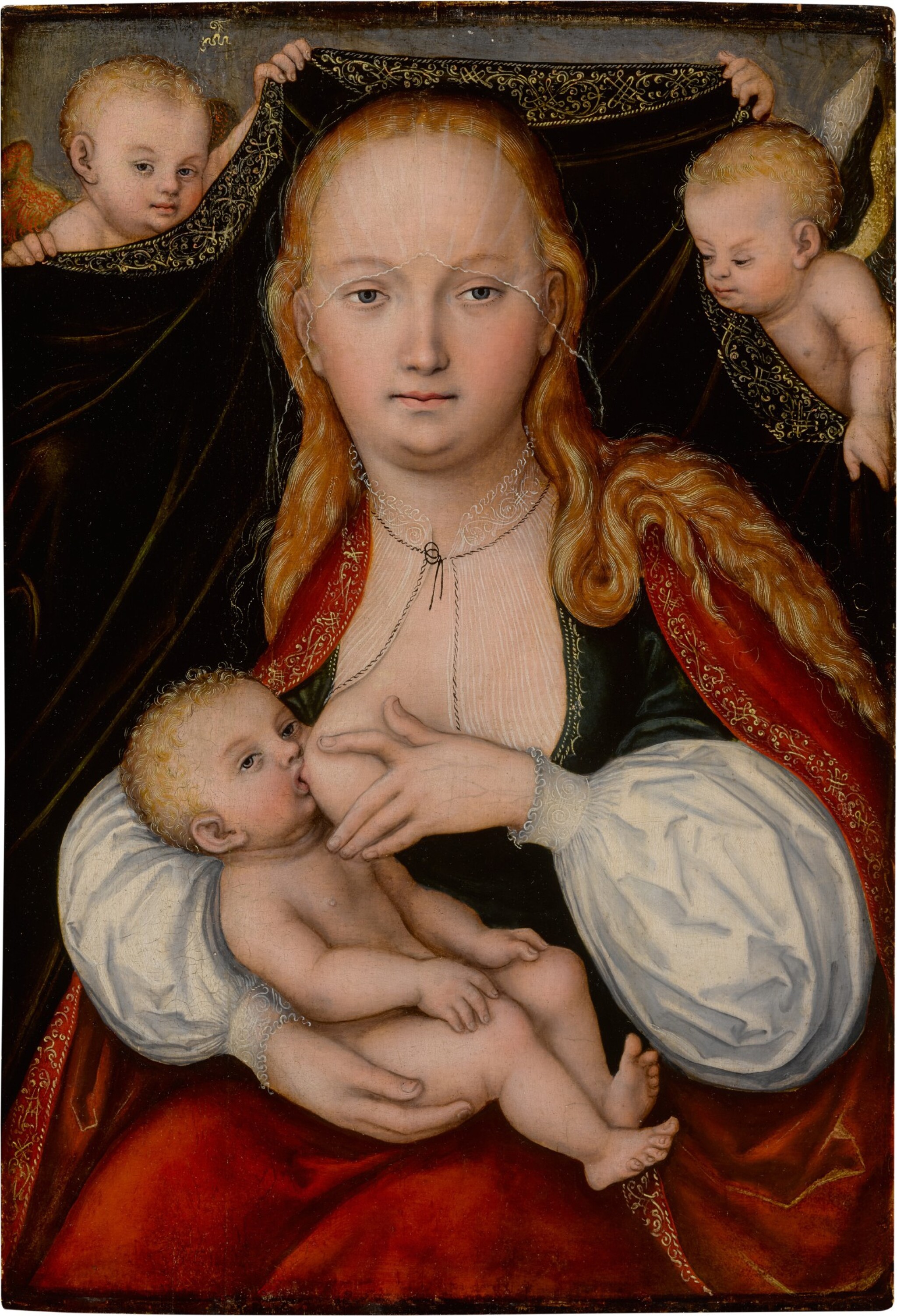 signed with the artist's closed winged serpent at top

Catalogued by M.J. Friedländer in his seminal 1932 monograph, this mature work by Lucas Cranach from circa 1540, last seen on the open market in 1985, is the highest quality version of this important religious composition known today. Various examples by Cranach and his workshop attest to the popularity of the composition, though extant versions would be appear to be of inferior quality to the present work. Panels are recorded both by Friedlander-Rosenberg, op. cit, 1978, p. 147, and the Cranach Archive online database. They include one in the Kunsthistorisches Museum, Vienna; a second Capuchin Church, Innsbruck; the third formerly with Goudstikker, Amsterdam, probably by Cranach the younger; a fourth formerly in the Metropolitan Museum, New York, a copy by Cranach the younger; and a fifth listed in the Hugo Helbing sale, Munich, 1912.

It has been noted through a number of Cranach's Virgin and Child compositions an awareness of the work of Pietro Perugino. Although Cranach was clearly aware of facets of Italian art from early in his career, a number of works painted beginning from from the 1510's show a heightened affinity with contemporary Italian painting, and this has led some scholars, notably Mark Evans, to speculate that Cranach might have made a journey to Italy, possibly in early 1509.1 Evans compares a Cranach Virgin and Child of 1509-10 with a painting of the same subject by Francesco Francia which itself reveals echoes both of Perugino and early Raphael.2 As Bodo Brinkmann has noted, Cranach's Uffizi Madonna and Child with Saint John of circa 1514 is reminiscent of the early work of Raphael and Perugino, and the present work has an asymmetric note also found in Perugino.3  While the visual evidence that Cranach absorbed influences from Tuscan and Umbrian painting is abundantly clear, it seems unlikely that he was able to squeeze a transalpine return journey in winter between New Year and Easter 1509, as Evans has raised as a possibility, and if he had, he would have had no time to look before turning round. Nonetheless, the present picture is striking evidence that Cranach was receptive to Italian influences at this time.