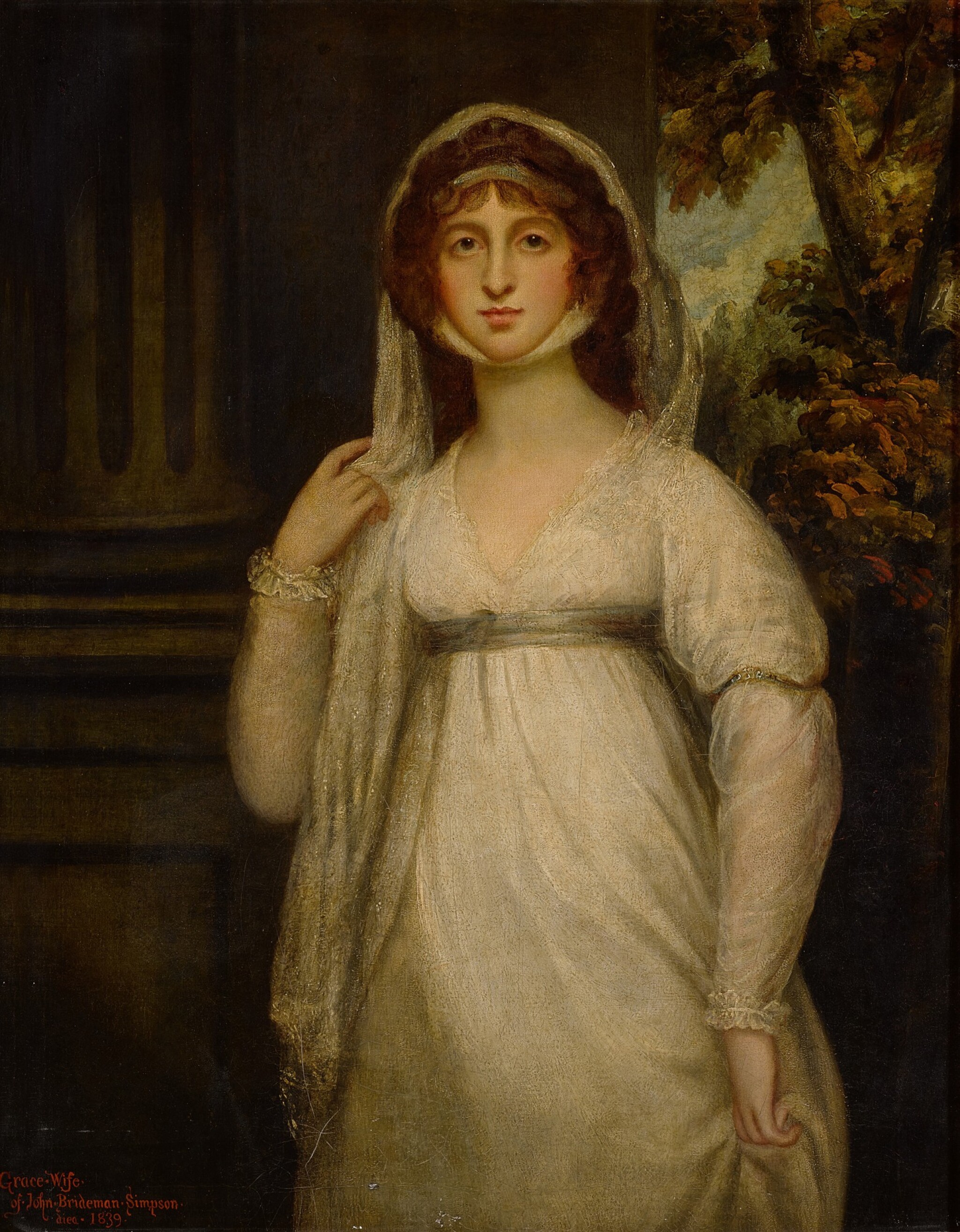 This recently rediscovered late work by the celebrated eighteenth-century society portraitist George Romney depicts Grace Estwick Bridgeman-Simpson. Wearing a cream-colored dress with an empire waist and a muslin veil, she stands before a fluted column, an element emblematic of the era’s neoclassical taste. Her fashionable attire, frontal pose, and the composition’s restrained color palette are all characteristic of Romney’s portraits.

Grace Bridgeman-Simpson was born in Barbados, where her father, Samuel Estwick (1736-1795), served as a colonial agent from 1778 until 1792. A prosperous planter, political pamphleteer, and Member of Parliament, he was a staunch supporter of the institution of slavery, and in 1793 successfully blocked William Wilberforce’s bill advocating for immediate abolition of the slave trade.

Two years before sitting for Romney, Grace had married the widower John Bridgeman-Simpson (1763-1850). Keenly interested in agriculture, Bridgeman-Simpson commissioned the acclaimed landscape designer Humphry Repton to redesign the parks of his country manor, Babworth Hall. The painting remained there, hanging in the dining room alongside other family portraits, until the early twentieth century.

Bridgeman-Simpson sat for Romney on eight occasions between late January and early November 1795. By the following year, Romney’s failing health curtailed his painting activity and so like many works from this period, the portrait seems to have been finished by another artist, whose interventions are most evident in the background foliage and Bridgeman-Simpson’s left hand that thumbs her gown.1

Even though Romney's associate William Saunders framed the work in December 1796—when still in its original full-length format—the painting remained unclaimed by the Bridgeman-Simpsons until January 1803. The Bridgeman-Simpsons paid only £100 for the work (rather than the previously agreed upon 130 guineas), suggesting that it may have been cut down in the early nineteenth century at their request.2

2 Though T.H. Ward described the work as “Full-length,” the dimensions he included are nearly identical to the present size, suggesting it had already been cut down by 1904. T.H. Ward, Romney, A Biographical and Critical Essay, With a Catalogue Raisonné of His Works, London 1904, vol. 2, p. 143.