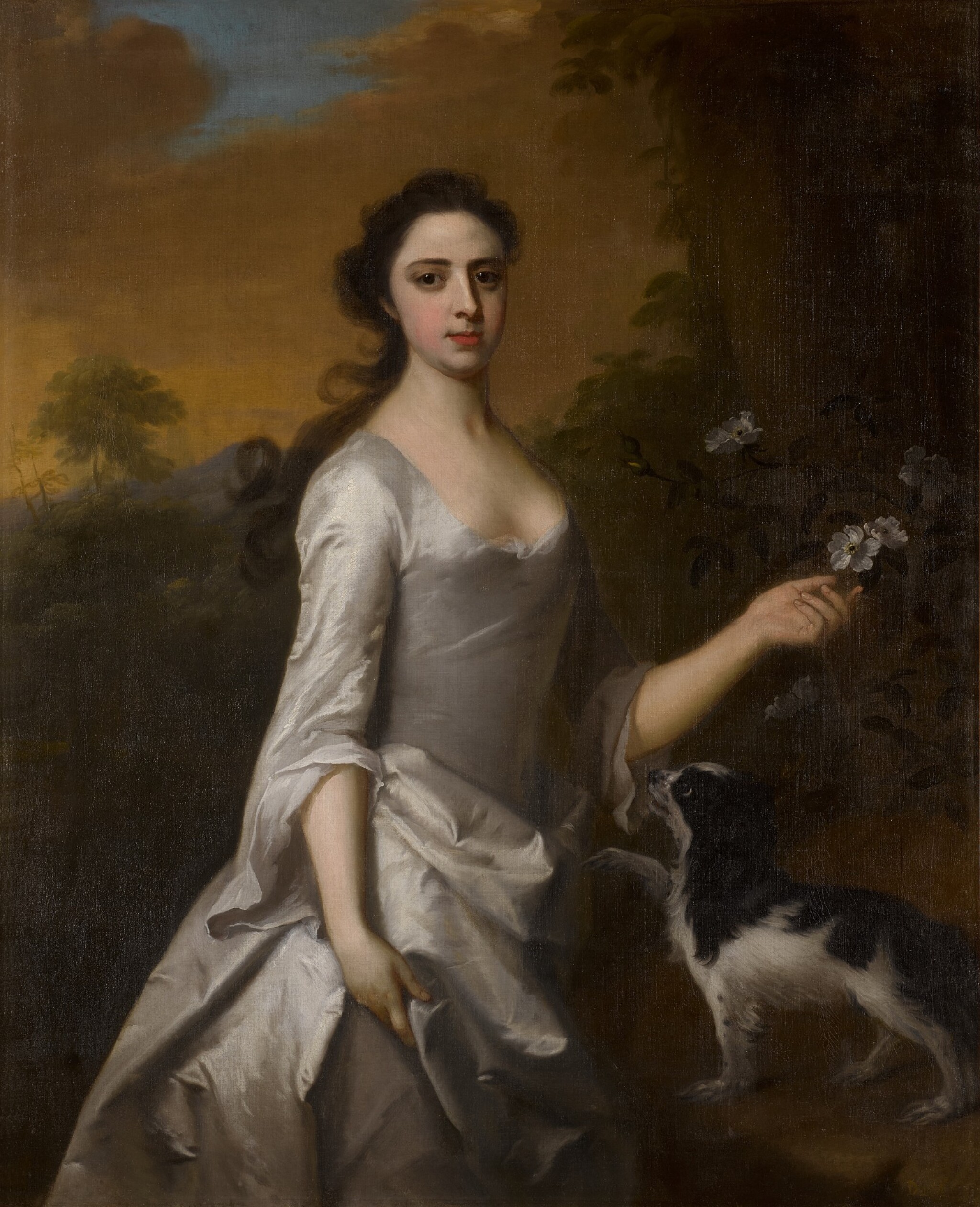 The canvas is thinly lined and taut on its stretcher. The image reads strongly beneath a crisp varnish, and there are no instabilities to the painted surface. Some areas of thinness are visible particularly in the shadows and the darker tones of the background, as consistent with age and the relining process, although there are areas where the artist's thick and loose brushwork is still-well-preserved, such as in the white highlights of the sitter's costume. Inspection under UV reveals a somewhat milky varnish. There are a few small spots of retouched restorations scattered here and there in the background, for example to the right of the dog's head in the lower right, with two spots in the sitter's costume near the center of the lower edge. Some thin and very fine strokes of cosmetic retouching attending to the weave of the canvas are visible in isolated spots in the figure, with some in her face, upper chest, and costume. Some additional fine, thin strokes here and there in the background, including an area in the shadows of the landscape at center left. Some additional very few small spots of retouching only here and there, such as in the ear of the dog. The painting is ready to hang in its present condition. Offered in a giltwood frame.

The Swedish-born artist Michael Dahl worked primarily in London as a portrait painter from the end of the 17th century and into the first half of the 18th century. A rival of Godfrey Kneller, Dahl favored a soft and sensitive approach to capturing the features of his sitters, and sometimes paid lavish attention to the fabrics of their costumes with particular brilliance. A prolific artist of great versatility, Dahl established a strong network of royal and fashionable clientele, counting among his patrons Queen Anne, Prince George of Denmark, the Duke and Duchess of Marlborough, and Charles Seymour (Duke of Somerset), among many others, the latter of whom commissioned from the artist his famous set of seven beauties today at Petworth House.

According to an inscription on the reverse of this canvas, this portrait may depict Frances Bristow of Micheldever, fifth daughter of Robert Bristow and Katharine Woolley. In 1719, she married Colonel John Warde, though she died 8 years later in 1727 at age 31. In 1731, her husband purchased Squerryes Court in Kent where several portraits of his late wife adorned the walls, including one full-length portrait by Dahl that hung over the mantelpiece in the library.1 Other known portraits of Frances Bristow, or Lady Warde, include an equestrian portrait of her by John Wootton(2) and a full-length portrait of her by William Aikman(3), both still today at Squerryes Court.

1.  Surrey Archaeological Collections Relating to the History and Antiquities of the County, vol. IX, London 1888, pp. 408-409.

2. Oil on canvas, 49.5 by 53 inches. https://photoarchive.paul-mellon-centre.ac.uk/objects/410467/equestrian-portrait-of-mrs-warde-frances-bristow-mrs-lady