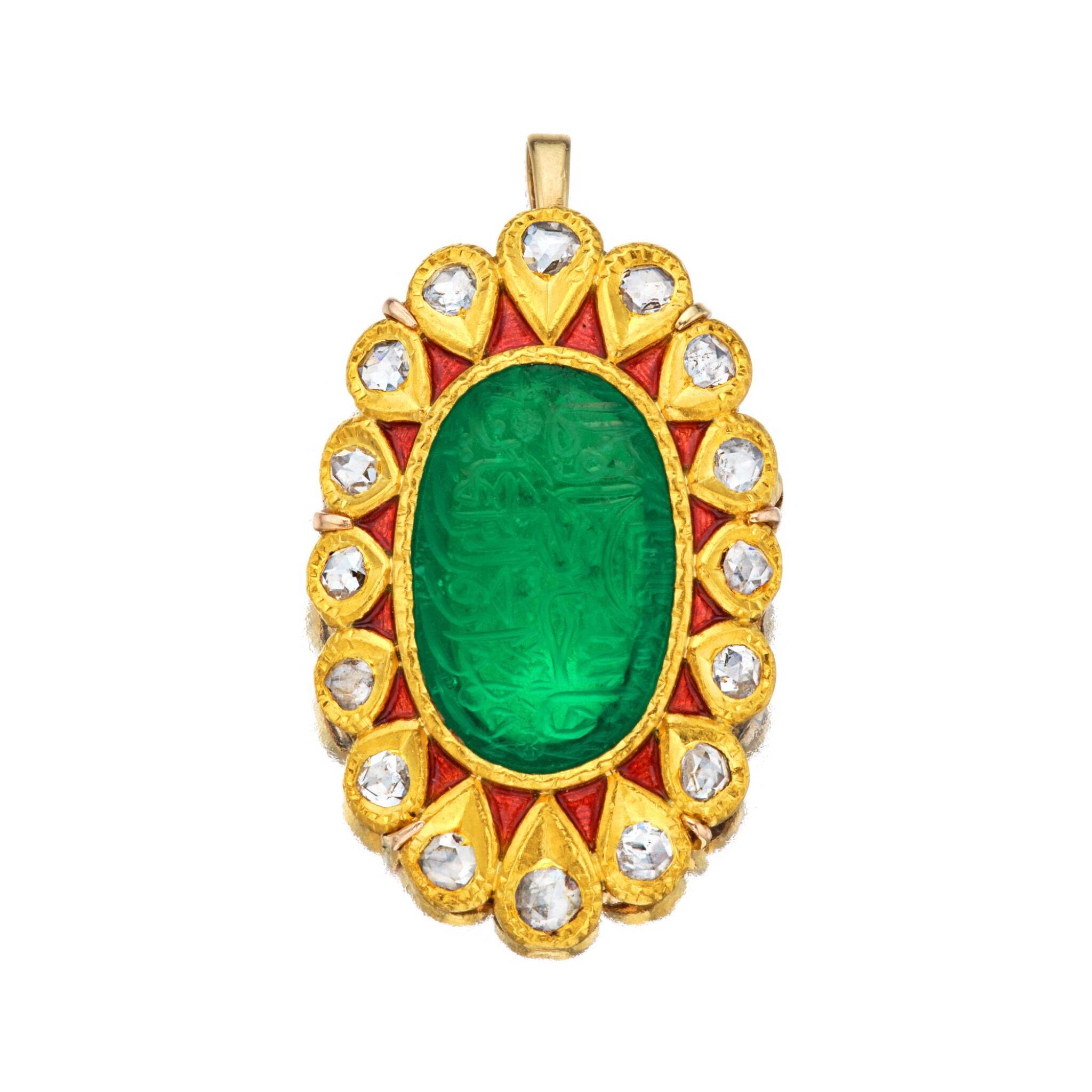 In good condition, the mounting with scratches commensurate with wear and age. Stamped 24&18K for 24 and 18 karat gold. The scratch number 8704 found on the mounting dates the piece to circa 1925, as supported by an early volume of unpublished Marcus & Co. sketches in a private institution. The emerald itself is inscribed with the date 1207 A.H., corresponding to the year 1792 A.D. and may have been acquired during Herman Marcus’ visit to India in 1894. The pinstem appears to be a later addition, dating possibly to circa 1940. The emerald, measuring approximately 24.8 x 15.8 x 6.0 mm, is medium light very slightly bluish green, slightly included. The diamonds, estimated to weigh a total of approximately 1.45 carats, are of decorative quality. The enamel intact and in good condition. Gross weight approximately 17 dwts. Dimensions approximately 2 x 1⅛ inches. Accompanied by AGL report no. 1121660 dated March 18, 2022 stating that the emerald is of Colombian origin, clarity enhancement: minor, type: traditional.

Please note this piece dates to 1925, not circa 1900 as stated in the printed catalogue.

Accompanied by AGL report no. 1121660 dated March 18, 2022 stating that the emerald is of Colombian origin, clarity enhancement: minor, type: traditional.

﻿Herman Marcus traveled to India in 1894, the year his beloved wife died. During this “tour of India,” the Montclair Times reported, he acquired “an interesting and complete collection of Indian jewels.” Indian jewelry had a lasting influence on the firm’s design aesthetic.

Important art collectors such as MCD Borden, a textile magnate known as “The Calico King," purchased Indian jewelry from Marcus & Co. Borden's significant collection of Old Masters, Asian porcelains, ancient glass, a “notable library” and a group of jewels was sold in 1913. American Art News (1913, vol. 11, no. 18) noted that collection contained “rare old pieces of Indian jewelry secured from Marcus & Co. in 1896.” These “rare objects from India” were sold on the third day of the Borden auction. In the auction catalogue published by American Art Galleries, lots 546, 547 and 548 were listed as an “Antique Indian Belt Buckle,” a “Sacred Lingam” and a “Rare and Beautiful Engraved Emerald and Enamel Buckle.” Each "gem encrusted" object was set with a substantial engraved or carved emerald, the largest weighing 387 carats. The 387 carat emerald had been mounted by Marcus & Co. in gold in “India style, with Japiur enamel back”, and was accompanied by a letter from the jeweler attesting to an undocumented provenance from the Maharajah of Benares. The dimensions of this emerald may be appreciated by comparison to the “Mogul Emerald” held in the Collection of the Museum of Islamic Art, Doha, Qatar. The Moghul measures 5.2 x 4.0 x 4.0 cm and weighs 217.80 carats.

Throughout its history, the firm continued to offer jewelry and gems acquired in India, promoting Indian arts at events such as tea parties held at the Sherry Netherland. At one such tea in 1929, the New York Times reported that a thousand people attended to view a collection of Indian jewelry valued at $1,000,000. It included a carved emerald called the Taj Mahal, “a stone of 55 carats, intricately carved with the daisy and the iris, which are decorative motifs of the Taj Mahal.”

Sotheby’s is grateful to Sheila Barron Smithies and Beth Wees for their extensive research relating to this extraordinary brooch. They are presently working on a book on Marcus & Co. due to be published in Fall 2024.